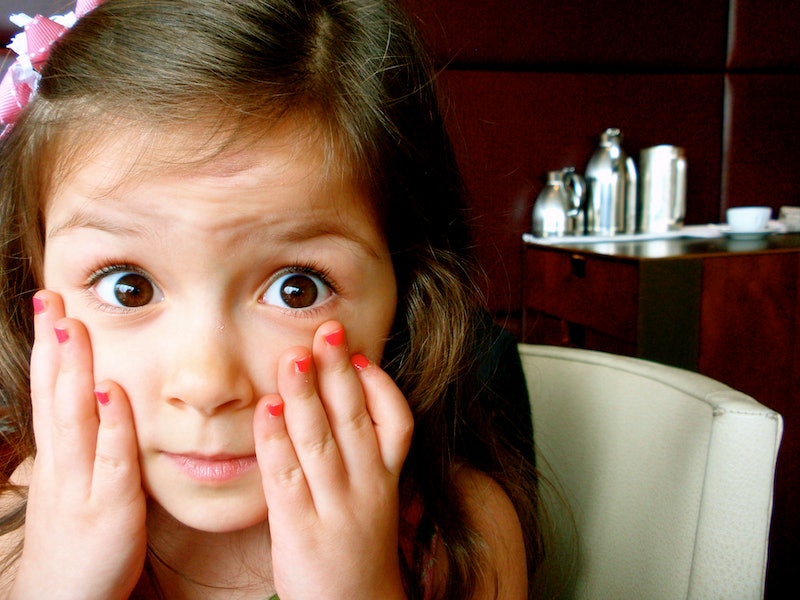 Successfully playing an April Fools' Day prank on anyone is rewarding in and of itself. April Fools' Day pranks you can play on your kids? Priceless. As a child, April Fools' Day was a day filled with horror and anxiety, quite possibly because I was a super cautious kid who happened to have some pretty cruel friends. Sure, my sensitivity level was (and still is) a bit higher than that of my peers, but having a day where lying and deception is viewed as being OK (if followed by the exclamation of "April Fools!") made me a little terrified to leave the house.

Oddly enough, I'd like to think that even as a kid, I had a pretty decent sense of humor. I loved all things comedy, and felt like my heroes were less Leonardo DiCaprio, more Janeane Garofalo. Why couldn't I at least appreciate the random pranks pulled on this terrible holiday? Perhaps because they just weren't funny.

I'm going to be honest, I'm not yet a parent — but I'm planning on being one, if all goes well. While planning for the future, my husband and I have had many in-depth conversations about how we'd be raising our kids. While it's easy to say things like "WE'D never do that!" after seeing a loose toddler freaking out in the grocery store now, one thing will be clear for when our time comes — our kids will be able to see the humor in all situations, and not let a teasing child (or adult) completely ruin their day.

I'm going to resort back to my own childhood here, and list a few jokes and pranks that would actually have made me laugh, and not scream, on April 1st.

There's one thing that's been true about the parent/child bond for years now — kids always think they can one-up adults when it comes to technology. Chances are, your kid has a cell phone. Even if they're in elementary school, and don't actually need to call anyone. It's just the way the world is.

The advantage is, I think that adults today are fully aware that technology is here to stay. It's important to be familiar with the Internet, and Snapchat, and cyber bullying, and all of the stuff that you (thankfully) didn't have to deal with in your youth. This is why a simple phone prank is absolutely genius.

Ask your kid if they signed up for anything suspicious while "checking out your phone bill online" later. Here's how I imagine it going.

Parent: So Bobby, do you know anything about "Daily Panda Facts"? We have a charge on our bill for it.

Parent: It says it costs five dollars a day.

It'd work best if Bobby has a past history of accidentally buying K-Stars in the Kim Kardashian game, and typically isn't so paranoid about spending his allowance by mistake. Make sure not to let this prank last for longer than it needs to, and of course, don't yell at him for doing something he obviously didn't do. Proceed with a smile and a sense of humor. Chances are, he'll think you're clever.

If your child is old enough to pick out their own clothes, this one will be pretty simple and a lot of fun. Move your clothes (or your husband's clothes, or your mom's clothes) into their closet, and ask them what they'll be wearing for the day. To add to the confusion, set up an outfit that clearly doesn't belong to them ahead of time, and convince them how pretty or handsome they'll be in that adult-sized tuxedo they'll have to wear today.

When the day is over, your child probably thinks he or she is in the clear. When they head to bed, chances are they won't imagine that their room will be filled with balloons.

If you can keep a straight face, tell them that you've transformed their room into balloon storage, and you really thought they'd be OK with this. Try to think up alternate arrangements (like, the balloons stay in the room, and your kid can possibly sleep on the couch until they eventually deflate), and work together to solve this completely serious problem together.

The con? Well, you'll either have to pop a bunch of balloons or move them to the basement. I'm guessing it'll be worth the shock.

If your kid gravitates towards the Cap'n Crunch, try switching the bag inside with another cereal — or perhaps, a bag of something else entirely. As long as the weight remains the same, your kid probably won't know the difference until they look at the bowl. Not only is it harmless, but it might be a good way for your kid to actually try a little Fiber One for once. Who knows, they may actually like it. It's not like their friends have to know.

Ever hear of a mashed potato sundae? If created convincingly, it could look a lot like ice cream. Tell them you're making something extra special after dinner to celebrate the beginning of the month, and watch them dive first into... potatoes.

If you're good in the kitchen, you can truly be creative with this prank and create a lot of "technically still food!" creations. Make sure you have some Breyers in the freezer to congratulate them for being good sports. Or consider taking them to Rita's, where they'll be able to regain their trust in food handlers again.

If your kid runs to their computer the second after they get home from school, consider giving them a surprise when they wake up their laptops — a big, scary selfie of your face looking right back at them. It'll be shocking, but temporary, and will cost you zero dollars. (Now that I'm thinking about it, I might actually pull this stunt on my husband.)

If you're not above mopping up a kitchen table, this one will require no further prep. If your family breakfast typically includes orange juice, apple juice, or milk, make sure to be reading the paper after your child finishes swallowing. Soon after, make sure to curiously exclaim, "Hmm. This article just stated that orange juice is poisonous."

Hopefully the reaction will be a spit-take, or a momentary look of panic. Make sure your kid knows he or she isn't doomed for the rest of the day. Otherwise, that'll be kind of cruel.

Have a 16-year-old? They have driving on the mind, and nothing else. Driving means freedom, and the chance to go to the mall and check out the dimly lit Hollister selections whenever they want. If your teenager has been bugging you for a car for a while, and still doesn't realize the money that's involved with this type of purchase, they'll probably be slightly disappointed at the tiny Matchbox vehicle in the driveway.

I mean, putting it in the driveway? That's taking it to a brand new level!

Children, like the rest of us, don't want to get out of bed. Chances are, they're a little hazy, and it might take them a while to fully wake up. That's why this harmless prank will work best in the morning. With a few craft store supplies, you can make their alarm clock come alive, with a pair of stick-on eyeballs and some pipe cleaner arms.

If it's cute enough, there's a chance his or her alarm clock might keep this personality for the rest of its electronic life.

If you've got a lot of pictures of your kid on the mantel, this one might catch their eye quickly. Simply replace the photos with pictures of you, in similar poses. As a bonus, it might be a lot of fun to re-enact those posed moments, and who knows? They might be hits on your Instagram after the day is over.

Remember, April Fools' Day should be fun, and not utterly humiliating. Always know what your kids can handle, and where their sense of humor lies, before pulling a prank. After all, they don't want to fear the holiday — they just want to see how creative you can get with it year after year.