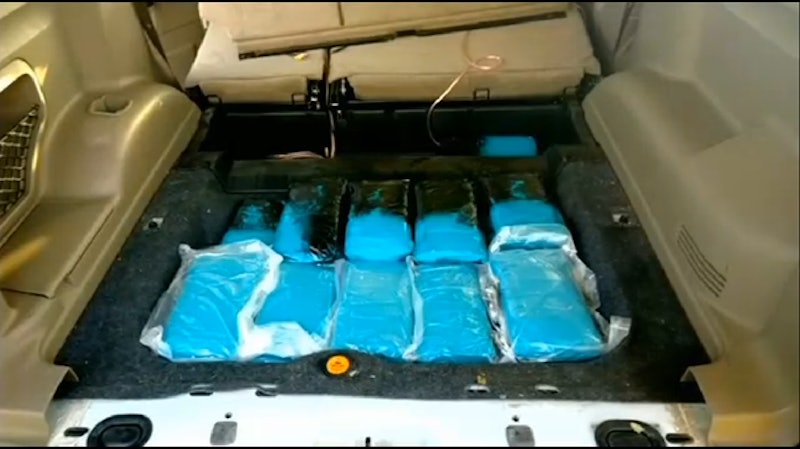 Albuquerque may have just held a real life funeral for Breaking Bad's Walter White this weekend, but here's overwhelming proof the saga isn't over: According to local news station Fox25, police in Oklahoma discovered over 40 pounds of blue meth, or what is believed to be blue meth, in the back of an SUV. It looked just like Walter White's meth, which, if you all recall, could really only be recreated by Jesse Pinkman, but considering Pinkman is probably off living a simple life somewhere awesome, this can only mean one thing: Walter White is still out there, and he's left New Mexico for Oklahoma. Someone should start looking for missing methylamine barrels.

That, or even drug dealers want to capitalize off the success of Breaking Bad these days. Either way.

Officials got consent to search the vehicle and discovered a false compartment in the rear passenger area. In the compartment, they found 15 bundles of illegal drugs that is believed to be methamphetamine. The bundles weighed 1.3 kilos each and totaled out at 19.5 kilos: approximately 42.9 pounds. Deputies say the drugs are estimated to be worth $2.3 million.

As for the driver, he was arrested, and more drugs were found at his home along with five other suspects. You can check out a clip from Fox25 by heading over here.

More like this
Lori Vallow’s Son Was Arrested For Sexual Assault Days Before 'Sins Of Our Mother' Premiered
By Brad Witter
Where Is The Bling Ring’s Rachel Lee Now?
By Arya Roshanian
What Is 'Pretty Wild' Star Tess Taylor Up To Now?
By Morgan Leigh Davies
Where Is Armie Hammer’s Ex-Wife Elizabeth Chambers Now After 'House Of Hammer'?
By Grace Wehniainen and Radhika Menon
Get Even More From Bustle — Sign Up For The Newsletter