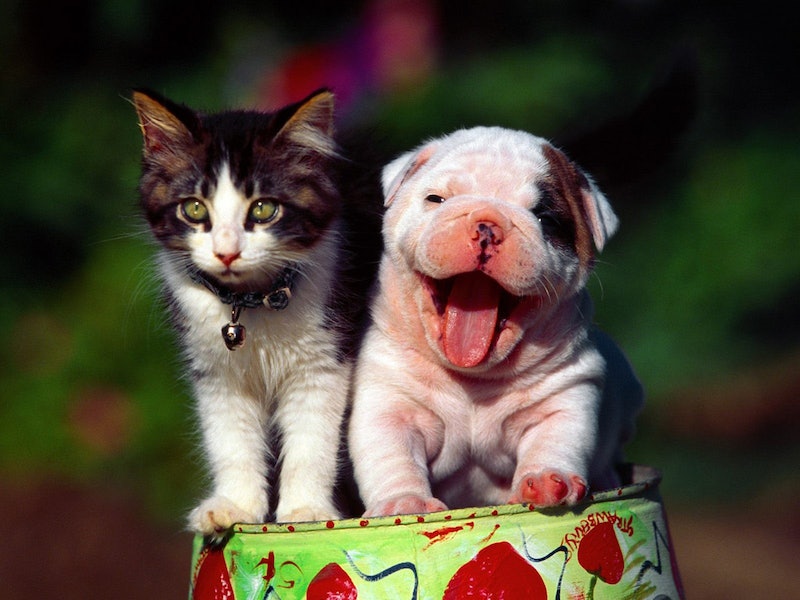 It's often said that there are two types of people in this world — dog people and cat people. While your personality might affect which animal you choose to make your favorite furry companion, though, the question still remains: Based on their own merits, do dogs or cats make better pets? Pet food and treat company Petfresh attempted to find out — and while the resulting video isn't exactly scientific, it is ridiculously adorable. Awwww.

Petfresh ranked a selection of pups and kitties on 13 qualities, ranging from how good they are at hiding to how effective they are as workout buddies and from how hipster they are to their inherent levels of helpfulness (spoiler: Cats are not helpful. Not at all). Then they assembled their findings into a video, because what else are you going to do with all that playful pet footage? OK, yes, the video is effectively an advertisement — but it's a pretty dang effective advertisement, because let's face it: Who doesn't like watching videos on the Internet of dogs and cats doing cute things? No one, that's who. Not even the Grinch, because you know he would have made Max a YouTube star if YouTube was a thing in the Dr. Seuss universe. Just sayin'.

So: Who scored the best? Let's take a closer look at a few of the categories:

...You cannot choose one of these images over the other. They are both equally cute. I'm going ahead and declaring this one a tie.

What do you think, guys? Dog or cat? The official winner this time is…

Because the cat just looks kind of smug, watching from his Roomba and judging you.

No contest on this one.

This one? Totally another no contest, although this time in favor of the other pet.

What you can't see in this still image (but which you will see if you scroll down and watch the whole video) is the cat squeezing between them, landing heavily on their laps, and then running off into the distance. Dogs, however, are the perfect third wheel with their cuddles and slobbery kisses. Awwwww.

How easy is your pet to bathe?

Obviously the one that bathes themselves is going to win this one. Although it's worth noting that if you ever have to give a cat a bath yourself… don't. Just don't even try. It's only going to end in tears.

But maybe I'd better let the remaining eight categories speak for themselves. Watch the full video below — but I'll leave with a brief hint of what's to come: When it comes to cute animals, everybody wins!

And here's a little behind-the-scenes fun while we're at it: