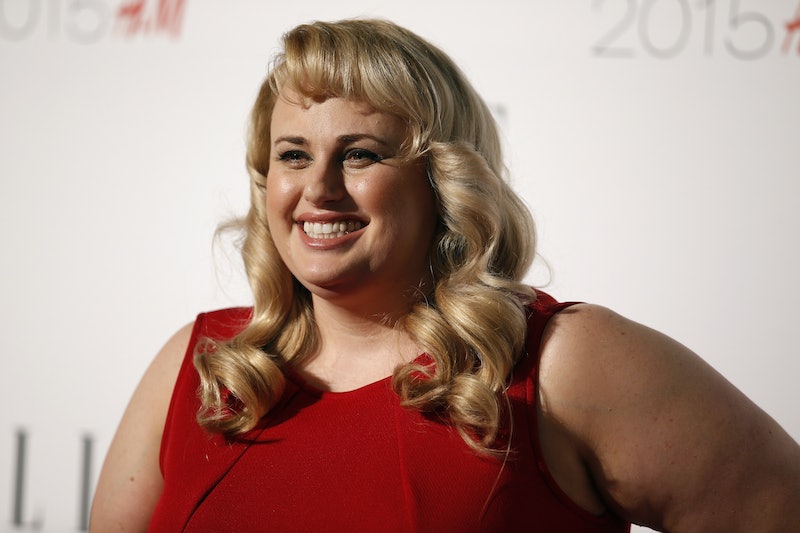 This just in: Rebel Wilson would definitely not call herself a style icon and laughs at the comparisons that have been made between Kate Middleton's style and her own — but in an interview with Elle Australia, she admits that she's starting to take her style more seriously. Wilson covered Elle Australia this month and told them that she's "the type of girl with zero fashion sense but I am getting into it now." But Rebel Wilson's style has always been on-point when she turns up at red carpets to, you know, celebrate her accomplishments or launch a new film she's starring in. (I mean, I personally don't hesitate to deem her body positive ways as being worthy of the title of style icon.) So as one of the hottest comedic actresses of the moment, why is killing it at the style game a concern to her? Well, it's actually a pretty good reason.

"I saw a lot of girls were beginning to notice what I wear and I feel a kind of responsibility, because there aren’t any women in Hollywood my size and age," Wilson told Elle. The lack of young plus-size celebrities makes her hyper-visible as an example of fat babe style and she wants to give other young women something to look up to.

I feel torn by this decision: On one hand, I am all about increasing representation and being out there, showing how fashionable plus-size babes are and can be. (Seriously, let's have more plus-size women who are already walking the red carpet making those best-dressed lists and giving plus-size teens and, who are we kidding, adults someone to look up to style-wise.) On the other hand, it's frustrating to me that Wilson is kind of right. There aren't many other young women her age and size who are walking red carpets or covering magazines on the regular. It seems so unfair, in a way, that a celebrity who seems to have very little organic interest in fashion or style and wants to act has to be obligated to take this up in the name of representation. I mean, there are straight-size women who dress cute, but aren't exactly fashion icons. There are tons of them! And it's okay for them to not be super into fashion, because there are a myriad of other women who resemble them and are already into it.

The problem here isn't Rebel Wilson's style: It's the lack of plus-size leading ladies and the lack of diversity and representation in the media. There are plenty of fashionable fat babes (and plenty of talented fat babes) out there, waiting to be recognized and waiting for these opportunities. Even though Wilson's visibility is important, she's only one person of a single size, body shape, ethnicity, gender expression, and sexuality. So whilst I hope we see more of Rebel Wilson this year, I also hope we see more of all kinds of babes, to get over our tired, stringent beauty ideals.