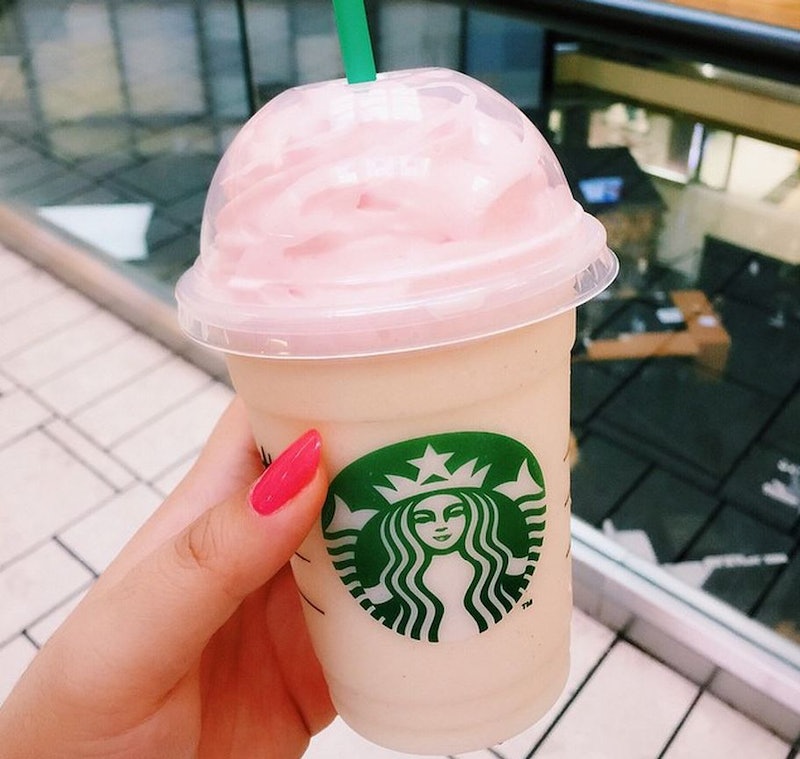 Well, Starbucks fans, the day has come. The Starbucks Birthday Cake Frappuccino has departed for a higher plane of existence, never again to grace us with its glorious, baked good-like presence. How sad! What a tragedy! It is gone before its time!…

...Except that's not strictly true. As we've remarked before, the Birthday Cake Frap can still be yours thanks to the beauty of the Starbucks Secret Menu. Just ask your barista to toss a pump or two of hazelnut syrup into your Vanilla Bean Crème Frap and you're good to go. You can also DIY one, or just make something that reminds you of it. But shhh — let us mourn the death of the official Starbucks Birthday Cake Frappuccino in peace. There's just something inexplicably fun about being able to go into any Starbucks, say “I'd like a Birthday Cake Frappuccino, please,” and have everyone know exactly what you're talking about it.

But the Birthday Cake Frap isn't the only limited edition Frappuccino to have had an all-too-brief time in the sun; it joins a long line of other discontinued Fraps, so at least it's in good company. To give it a proper sendoff, let's take a look back at some of the other delicious Frappuccino flavors you can no longer get at your local 'Bux, shall we? These 10 previous offerings may be gone — but they are certainly not forgotten.

Since Starbucks' home base is in Washington, it's only natural that they'd celebrate the Seahawks' trip to the Super Bowl this year with a drink. The Seahawks Frappuccino was only available at some locations in Washington and Oregon, but it sounded divine: A Vanilla Bean Crème Frappuccino blended with blueberries and topped with matcha-infused whipped cream.

During the summer of 2013, the 'Bux offered this decadent blended drink featuring four kinds of caramel and topped with caramel sauce, whipped cream, caramel drizzle, and a sprinkling of crunchy, sugary things. The Caramel Ribbon Crunch Frappuccino is no longer available, but maybe that's a good thing — it sounds more like a dessert than a coffee drink.

During the 2014 Halloween season, a Green Tea Frappuccino spiked with peppermint syrup, white chocolate sauce, and java chips and topped with whipped cream and a mocha drizzle made the rounds under the name “Franken Frappuccino.” Frankenstein's Monster may not actually have been green — we have the movies to thank for that misconception — but it was still a pretty delicious way to celebrate the holiday.

Ah, yes — the thing for which the “cheese” syrup flavor was invented. The Strawberry Cheesecake Frap is only available in Australia for the summer, and it'll only be there for a brief amount of time; if you want one, you'd better grab one fast!

Another one that was really more of a dessert than a coffee drink (which, granted, is true of most Frappuccinos — but you get what I mean), the Mocha Cookie Crumble Frappuccino had a delightfully crunchy texture due to the Chocolate Cookie Crumble things that lay scattered across the top of it. It had its heyday in 2012, but alas, has since been discontinued.

It only appears once a year, but when it does? Hoo boy. It's better than your favorite winter gift-giving holiday and your birthday combined. I've never actually had one of these — usually I prefer warm beverages when the weather gets colder — but given how favorably coffee expert Wes Johansen reviewed the iced version of the drink, it's possibly that it's better cold than it is hot. And if it's better cold, then it's probably out of this world when it's frozen, right?

Like the Pumpkin Spice Frappuccino, the Gingerbread one is only available seasonally — but I still maintain that very little accompanies coffee better than the spiciness of a little gingerbread syrup. Anyone else?

Another international offering, the Fresh Banana Chocolate and Cream and Fresh Banana Caramel and Cream Frappuccinos took the stage in Japan during the spring of 2014. They never made it over to the States, but you can always buy a banana and ask your barista to blend it in with your next Frap order. Voila: Instant Fresh Banana Frappuccino.

OK, so technically this one isn't a flavor…. but I mean, come on. How can I not talk about the Frappuccino Truck in a discussion of discontinued Frappuccino-related things? Back in the summer of 2014, the Frap Truck took to the streets of California, spreading delicious, icy joy wherever it went. Is anyone else kind of bitter it never came to New York?

More like this
10 Pumpkin Recipes That Are Way More Creative Than Pie & Lattes
By Rebecca Deczynski and Alexis Morillo
On TikTok, Tinned Fish Date Night Is The Latest Viral Food Obsession
By Emma Carey
Bennifer, Kravis, & 14 Other Fun Celeb Couples Halloween Costume Ideas
By Emma Carey and Brittany Leitner
7 Symbolic Meanings Of Autumn — From Letting Go To Self Preservation
By Kirsten Nunez
Get Even More From Bustle — Sign Up For The Newsletter