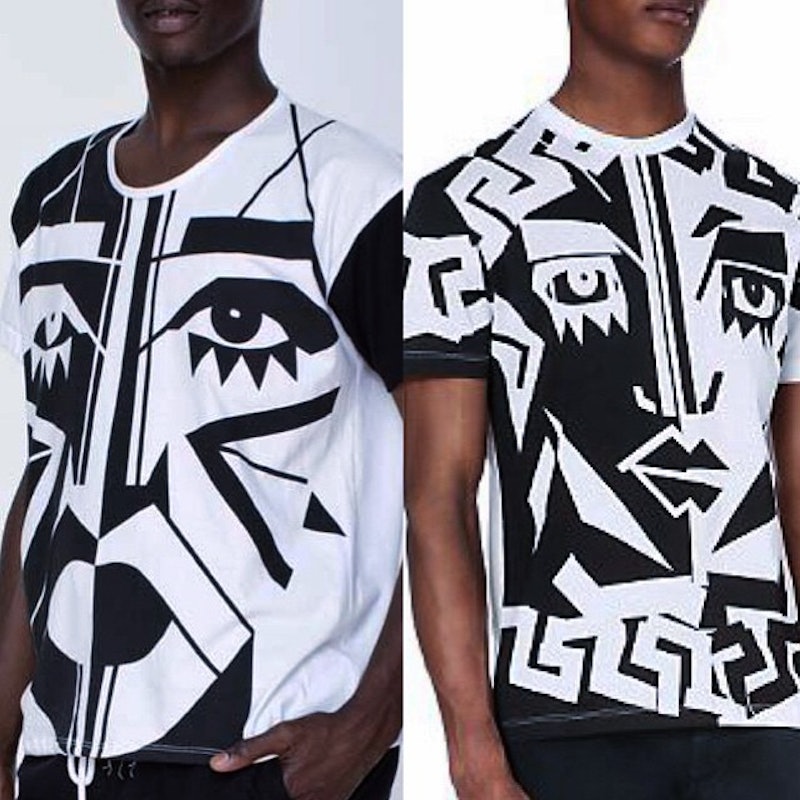 Unlike the viral dress seen 'round the world, the latest fashion controversy is much more than just a black and blue or white and gold issue. L.A.-based artist Kesh is accusing Versace of plagiarizing an American Apparel t-shirt that she designed back in 2013 and seeing the two designs next to each other is truly shocking. Kesh took to her Instagram to call out the celebrity-endorsed luxury brand for allegedly copying a black and white image that she designed two years ago for American Apparel. Versace's version of the design appears on its Medusa cotton-jersey t-shirt.

“I have always had a deep admiration for Versace," Kesh said in a statement. "It's an iconic brand that has stood the test of time. I am deeply disappointed in this. This is not only artwork from a show that took me two years to develop and create. It is not only artwork from a collection that I created for American Apparel to provide something affordable and accessible to supporters of my work. But this is also my face! I can't understand how something like this could happen.”

Kesh found out about the design rip-off through a friend and discovered that Versace's Medusa t-shirt is being sold at British department store Selfridges for around $650. The artist posted a side-by-side comparison of the Versace shirt with her original design, which retailed for $30 at American Apparel in 2013. Ever since then, the story has been picked up by major publications including New York magazine, British Vogue, and E! News. Meanwhile, Kesh reportedly plans to file a lawsuit against Versace. The company has yet to comment on the allegations.

Do you think Versace stole Kesh's design for it's Medusa t-shirt? See for yourself below: