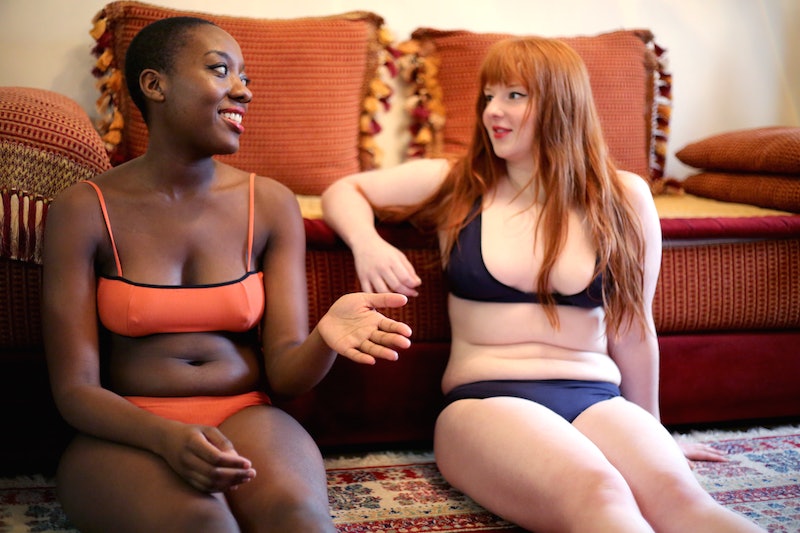 When it comes to genuine depiction of women in the media and fashion industry — I'm talking un-retouched, unaltered, pure imagery — it's no secret that we're in something of a famine. Just asked yourself, when was the last time you saw an un-retouched lingerie model sporting the characteristics most women have? Because from stretch marks to visible pores to soft arms to cellulite, the majority of us embody perfect imperfection — to some degree, anyway. The sheer lack of such imagery is the very reason Neon Moon Lingerie stands out. Having successfully funded their Kickstarter campaign, Neon Moon is about "change the face and body of the lingerie industry." And that it's going to be for the better is irrevocable.

Founded by 25-year-old London native Hayat Rachi, I was instantly intrigued by the mantra of this brand. A brand named after the moon — "a celestial being that changes shape throughout the month but still remains the same" — and the core of "neon" hues — "a very bold and vibrant aspect... Neon Moon is very unapologetic" — as described to me by Rachi herself via an exclusive email interview for Bustle. "When a person puts on their Neon Moon bra and knicker, I want them to feel ready to take on their day and feel empowered to unapologetically love themselves, regardless of what society says," she added.

As an Arab girl growing up in London, Rachi saw firsthand the lack of representation for bodies, ethnicities, styles and figures, outside of the prescribed norm, and she subsequently saw how damaging this sparse and narrow view of beauty can be to one's psyche. "I never saw myself reflected in a brand, so I grew very insecure as a teenager," she says. Despite seeing only one version of beauty in the mainstream, however, what Rachi saw across the board was an objectification of all women. "I was bombarded with sexualization and objectification of girls everywhere: On the Internet, in magazines, and billboards... So I want girls to question why they do the things they do, and think the way they think. Every girl grows pubic, leg and underarm hair, but just because society says to shave it doesn't mean that has to be the option for everyone!" Neon Moon's goal: To show the subjectivity of beauty; to bring back the element of choice.

Looking at the models that Rachi chooses to showcase in her designs — delicate lingerie, filled with triangle bras and softly-toned yellows and oranges — it's easy to see that she puts her philosophy into action. Rather than just speak about body positivity or the need for acceptance, she acts. "I want to see Neon Moon become the go-to brand for all who wish to see the objectification and sexualization of girls within the lingerie industry end," she says. "For all #NeonMoonGirls who believe in the equality of girls, Neon Moon’s feminist values, and wish to buy from a body-positive brand, Neon Moon is a great option for them!" And it truly is. Her Lookbook presents you with two women — unique to one another in everything from complexion to silhouette — looking nothing short of beaming. By some standards, they are indeed imperfect. But the images make it so obvious that said imperfection is what is so breathtaking; said imperfection is what's so needed.

Rachi speculated on why seeing women, in their "real" and unaltered states, is so uncommon. She reflects that perhaps honesty doesn't sell as well in retail. Perhaps brands and designers would showcase a variety of women if they believed it's what we wanted to see. But the thing is — people do want to see it. There's a demand for honesty — all that remains is for people to listen. "I still can’t get my head around why brands feel the need to retouch their models, or not include aspects of girls that the majority of their community encompasses," Rachi tells me. "I don’t see why girls need to be sexualized, objectified and pressurized to be a certain way. A girl's happiness does not rely on whether she has shaved that day, has cellulite, stretch marks, acne, or anything else."

The simple answer: Girls don't need to be sexualized, objectified or pressurized. Their decision to showcase their bodies should be their's and their's only — whether it be through empowering lingerie or otherwise.

Rachi's passion for her work is indelible. Her strong, feminist heart — her body positive musings — all prove that change is happening. That it needs to happen. "I aim to create a movement of #NeonMoonGirls that want change, and love lingerie that encompasses exactly the same ethos and feminist values that they personally share," she expresses.

As though all of this weren't enough to deem Rachi the next star in the body positivity galaxy, she also cites Malala Yousafzai as the person she'd most to want to meet if presented with the ability to teleport (a sci-fi nerd can dream). "She’s one of those people that I just envisage even if you turn up unannounced she’d make time for you and find chatting about feminism really easy." The beauty of this statement is that Rachi herself makes talking about feminism really easy — through every inch of fabric; through every #NeonMoonGirl she will undoubtedly inspire in a profound, necessary way.