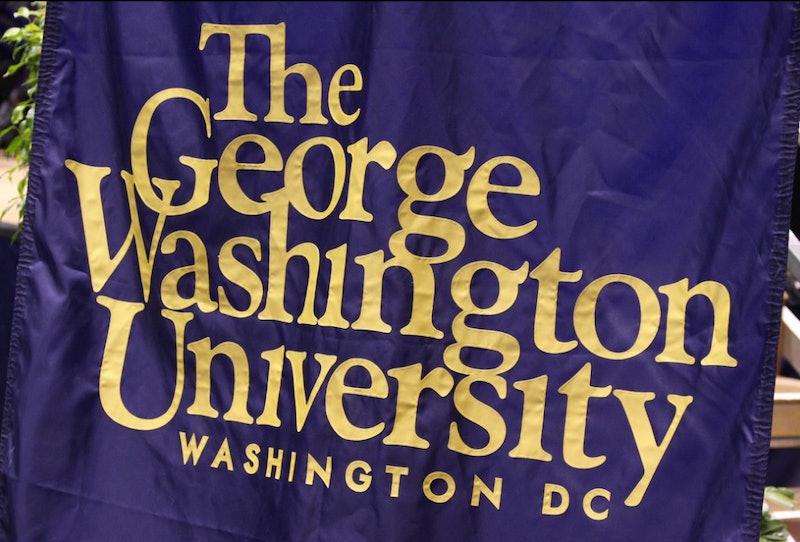 Like everyone else in DC, George Washington University is obsessed with prestige. And prestige, in college and university terms, is calculated these days by a number of factors: acceptance rate, endowment, yield — and the freedom to make your admissions need-blind. Now, it turns out, even though the university could not actually commit to that concept, it decided to tell the world it was doing just that.

In reality, though, the George Washington University was rejecting (okay, waitlisting but ultimately to the same effect) otherwise qualified — and admitted — low-income applicants, all the while selling them a false promise of a need-blind admissions process.

What need-blind means, in its simplest terms, is that an applicant is evaluated for admission to the university without regard to his or her economic circumstances. Sure, an applicant might mention economic hardships as a character-building experience, or might discuss extravagant family vacations to foreign lands that were a catalyst for an interest in international affairs, but those essays would be used solely to determine the quality of the applicant. In need-blind schools, the admissions office promises to make its decision separately from that of the financial aid office, which then determines how much money an admitted student’s family can afford to pay and how much of that will be provided by the school. Schools that consider financial need in deciding who to admit are “need-aware.”

Being a need-blind school indicates a commitment to social justice, to a diverse to student body, and suggests a healthy endowment and plenty of alumni support. Of course, it’s also great for PR — it gets the school more applicants, more donations, and more overall good karma — in exchange for helping kids who might not otherwise be able to go to a swanky school. Too bad that wasn’t actually the case at GW.

GW’s student paper, the Hatchet, broke the news. “Students who meet GW's admissions standards, but are not among the top applicants, can shift from ‘admitted’ to ‘waitlisted’ if they need more financial support from GW,” the Hatchet’s Jeremy Diamond reported. “These decisions affect up to 10 percent of GW's roughly 22,000 applicants each year, said Laurie Koehler, the newly hired associate provost for enrollment management.”

“Without knowing, wealthier students who were slated to land on the waitlist are accepted, taking the spots of students who would need more financial aid from GW,” as a consequence of the need-aware policies.

Now, GW says the policy only affects students who are not its top applicants, and Koehler estimated the figure to be about 10 percent of applicants. That sounds low, though, considering the selectivity of GW. With a 33% acceptance rate, the College Board rates GW as “very selective," and the university’s upper 25th percentile for each of the three SAT sections starts at around a 700. Not to mention, the school isn't SAT optional or flexible, which automatically puts low income students at a disadvantage. (The disadvantage low-income students are at when it comes to standardized testing has been well documented.)

So here’s what happens: the school wants students with top scores no matter what their scores are, and those students are disproportionately well-off. The second tier of scores goes for a second review, which considers need. A lot of the lower-income students are waitlisted, and eventually rejected. And that’s how GW ends up with 6.5 percent of its students receiving Pell Grants — an easy benchmark to see how many low-income students a school has — compared to its peer institutions’ 23 percent (Emory University), 16 percent (American University), 15 percent (Vanderbilt University), or 14 percent (Duke University and Georgetown University). (The Washington University in St. Louis has a similarly low seven percent.)

The problem, one could argue, isn’t with schools like GW looking at applicants’ ability to pay before accepting them. After all, accepting students you can’t afford to fund but who also can’t afford to pay their own way does little for either the school or the applicant. And GW’s per-student endowment is somewhere behind Michigan State’s — there are some things it just can’t finance. Admitting students who can’t attend anyway would drive down GW’s yield, which is a big no-no for their PR office. That’s fine.

The problem here is that the school was tricking qualified-but-not-overly-so low- and middle-income applicants into applying to their school, leading them to believe they had a 33 percent shot when in reality, their chances were much lower than that.

This story represents a bit of a crisis in higher education.

Need-blind schools, especially ones that meet the full need of accepted students, are disappearing, aided along by the Great Recession that took away large hunks of endowments. But schools still want to attract smart, talented applicants of all stripes, and many are turning their attention to merit aid, which allows them to lure in more top applicants. This move sucks more money away from need-based aid, as merit aid goes disproportionately to wealthier students — Mark Kantrowitz termed it "welfare for the wealthy."

GW has no excuse for its misrepresentations — which are still continuing, as the Hatchet notes, since admissions officers are now just telling students that, “The read is need-blind.” The University was already been removed from national rankings for misrepresenting the credentials of incoming freshmen.

But if need-blind is on its way out, we need to come up with a way to ensure equal access to top schools quickly. Or, perhaps, schools could begin to shift their focus onto financial aid rather than, say, building new dorms.