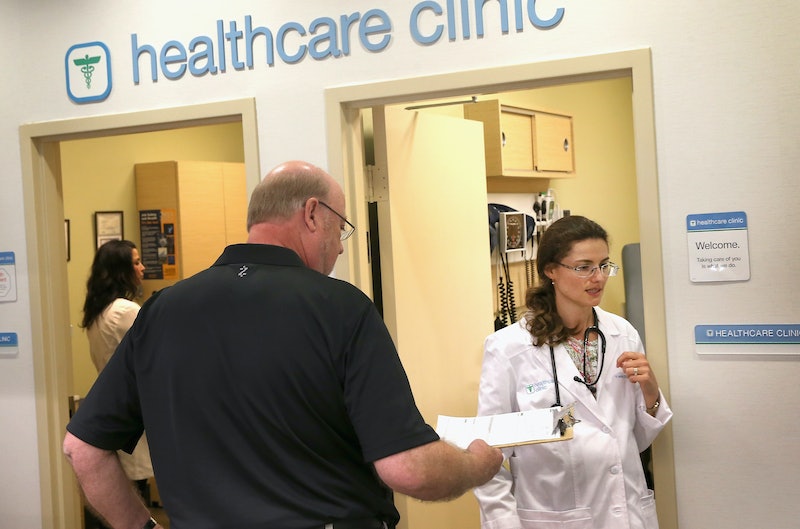 The Affordable Care Act requires businesses with 50 or more employees provide health insurance to full-time employees or pay a fine. Some critics are suggesting that because of this provision, Obamacare will usher in a “part-time economy,” as employers cut workers’ hours to avoid having to provide them with health insurance. While the claim has an aura of credibility to it, an honest look at employment statistics suggests the country is actually moving in the opposite direction.

Let’s get this out of the way: The number of people employed part-time for economic reasons — that is, people who want full-time work but can’t get it — has decreased by roughly 700,000 in the last year. This point was well-made by Michael R. Strain, a scholar at, of all places, the American Enterprise Institute. Strain tweeted out a link to the following graph, based on Bureau of Labor Statistics data, adding that there’s “not much evidence of Obamacare’s part-time America here.”

A more extensive study by the Center for Economic and Policy Research also concluded that the “Obamacare is a job-killer” myth is, well, a myth:

While there may certainly be instances of individual employers carrying through with threats to reduce their employees’ hours to below 30 to avoid the sanctions in the ACA, the numbers are too small to show up in the data.

An analysis of data from the Current Population Survey shows that only a small number (0.6 percent of the workforce) of workers report working just below the 30 hour cutoff in the range of 26-29 hours per week. Furthermore, the number of workers who fall in this category was actually lower in 2013 than in 2012, the year before the sanctions would have applied. This suggests that employers do not appear to be changing hours in large numbers in response to the sanctions in the ACA.

Furthermore, a study by the Kaiser Family Foundation found that 94 percent of firms with 50 or more employees already voluntarily provide health coverage to their workers, prior to the implementation of the ACA’s employer mandate.

It looks, then, like an open-and-shut case. But don’t tell that to the haters, who keep wailing that, in the words of one Forbes piece, “Obamacare Will Foster A Part-Time Jobs Bonanza For Our Limp Economy.”

The author of that piece, Richard Salsman, says that the ratio of part-time jobs to full-time jobs is higher than it should be and suggests that this is because of Obamacare. The economic analysis is a bit dodgy — for one thing, it’s not self-evident that part-time employment should be lower now than it is — which is probably why Salsman qualifies himself endlessly with phrases like “it seems plausible” and “no definitive link can be established.” Eventually, he retreats entirely from his original headline, making the wholly-different point that the “deeper” problem with Obamacare is that — and we wish we were making this up — “it ignores or violates the rights of health service providers,” and puts too much focus on “emphasizing patient need above all else.” Because you wouldn’t want to make health care all about the patients, would you? Especially not at the expense of those poor insurance companies!

There are tons of claims like this out there; another Forbes piece warns that “It's Fact, Not Anecdote, That ObamaCare Is Turning Us Into A Part-Time Nation;” it then goes on to list a bunch of anecdotes. Congressman Kevin McCarthy, a member of Republican leadership, said that Obamacare “creates a part-time America,” and the myth is so widespread in Republican circles that one of the many, many Obamacare repeal bills introduced by Speaker John Boehner was called “Repealing the Job Killing Health Care Law Act.” We're even guilty of suggesting that the law could result in employers cutting back employee hours.

This isn’t to say that the employment situation is all roses and sunshine; it’s not. Female participation in the labor force, in particular, has suffered lately, reaching a 24-year low last month after falling by 154,000. The number of women looking for jobs has fallen as well. But the notion that Obamacare is responsible for this, or any of the disturbing employment trends of the last couple of years, appears to simply not be true.