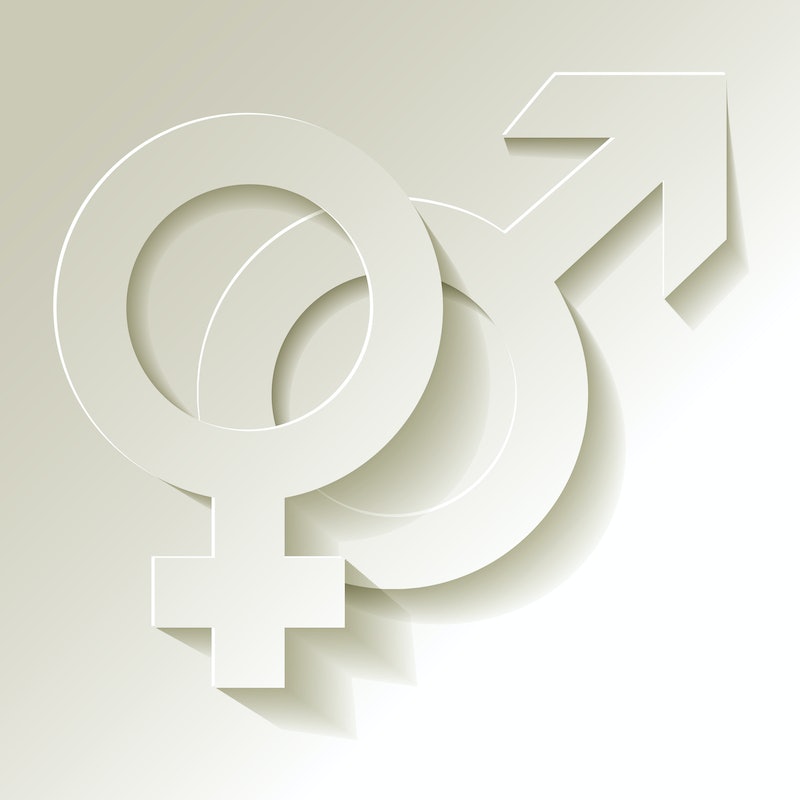 In the five or so years I’ve been on Twitter, I’ve never encountered someone so bold and persistently hateful as Cathy Brennan. As you’ve read here at Bustle (in interviews with Brennan and trans activist Sophia Banks) and elsewhere, Brennan is a contentious figure among transgender women and the people who support them. In this case, "contentious" means contemptible.

I’m frankly unwilling to argue that point. As someone who’s been involved in online feminism for a few years, I have seen Brennan use threats of legal action to silence transgender allies and other critics. Brennan contacted a transwoman's physician to make the provider aware that her patient has participated in "online harassment," and, most recently, Brennan was accused of working with the anti-gay group Pacific Justice Institute in spreading a fabricated story about a transgender teenager who “harassed girls in the bathroom.”

Brennan is part of a small collective of radical feminists who consider themselves to be “trans-exclusive.” As such, trans-exclusive radical feminists (often called TERFs online) do not recognize gender dysphoria as a legitimate condition that is treated by hormone therapy or gender confirmation surgery, even though most scientists disagree.

Brennan spends a lot of time online sharing her views on transgender women, and, even worse, harassing them. In case you weren’t aware, continually calling a trans woman a man is both transphobic and constitutes harassment. Most people would do well to ignore Brennan’s rantings.

For transgender people, though, monitoring Brennan’s activities may be extremely important. Aside from the outing of trans teenagers, Brennan has also shared the personal information — in this case, a workplace — of transgender women online. Also known as "doxing," this entirely legal practice can result in, at best, a lot of harassment and, at worst, physical violence.

I have also seen Brennan threaten to dox cis women, like my good friend @meadowgirl and, to a much lesser extent, myself. This abuse, though, happens to cis women much less frequently than our trans counterparts. Brennan has also used the the tweets and personal photos, sometimes naked, of trans women alongside messaging intended to shame them.

What Brennan and her radical feminist buddies don’t seem to get is that, as a feminist, I am not uncomfortable with trans women in my spaces. At all. In fact, in a guest post on her own blog, Brennan and other radfems declare that women who call out transphobia in lesbian feminism can't even call themselves feminists.

For Brennan, a penis is the definition of masculinity. That is not the feminism I believe in. We’ve been trying to eliminate gender essentialism in this movement for decades, and Brennan’s version of feminism does all it can to reinforce this harmful idea.

As Sophia Banks has said on Twitter, a penis is only male if it is attached to a man.

More insidiously, Brennan believes that trans women are violent men attempting to infiltrate female spaces. This could not be farther from the truth. Transgender people, particularly those of color, are more likely to become the victims of violence than almost any other marginalized population. If anything, allowing trans women into female spaces will likely reduce violence against them. I am far more concerned about trans women being abused in men’s bathrooms than a trans woman abusing me while I’m trying to pee.

I find Brennan and her tactics disgusting. As a cisgender woman, I can say all of that knowing that Brennan will likely not be able to ruin my life. She won’t be able to hurl hateful gender-based comments at me, or call me a potential rapist. As the consequences of her actions go, my frustration is nothing compared to the havoc she has caused in the lives of many transgender women.

I do, however, think it is important for cisgender feminists to state publicly that they find these tactics reprehensible. Supporting trans women is an important part of my feminist ideology, and bullies like Cathy Brennan can do nothing to change that. I believe that trans women, in whatever expression of that identity they choose, are women. Full stop.

My words do not represent those of the trans community, and I believe that it is important for trans voices to be heard. Transgender women are the experts on their lives, not me and certainly not Cathy Brennan.

But it is my responsibility as a feminist — particularly one with cisgender privilege — to condemn this hateful, dangerous, and morally contemptible behavior. Transgender women have too long been ignored in the mainstream feminist community.