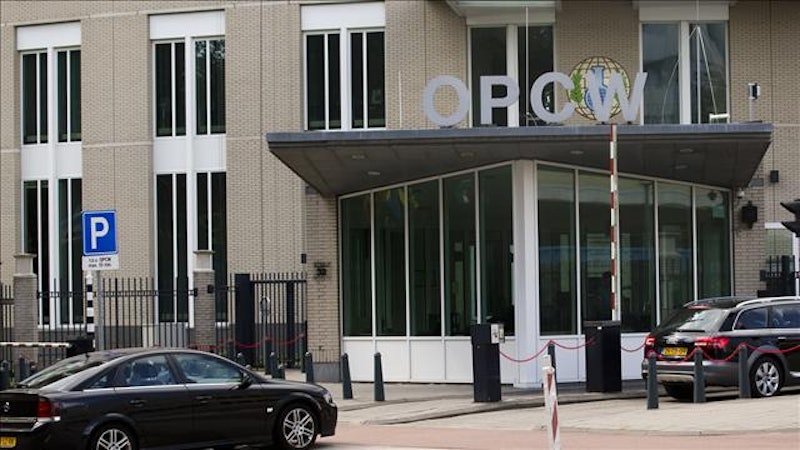 Hey, remember the Syrian civil war, the chemical weapons crisis, John Kerry’s accidental diplomacy, and the aborted U.S. military strike? All of that disappeared from American headlines once the government shutdown hit, but in case you were wondering, the international community’s plan to rid the country of its chemical weapons is proceeding right on schedule, authorities said today, and the international community is hoping to hold peace talks regarding a post-war transitional government next month.

“I am glad to be in Syria following the welcome decision by the UN Security Council and the Executive Council of the Organisation for the Prohibition of Chemical Weapons, calling for the expeditious destruction of the chemical weapons programme of the Syrian Arab Republic,” Sigrid Kaag, who’s in charge of the joint OPCW-UN mission to destroy Syria’s chemical weapons, said in a statement today. “To date, the Government of Syria has fully cooperated in supporting the work of the advance team and the OPCW-UN Joint Mission.”

The UN and OPCW, the latter of which won this year's Nobel Peace Prize, has conducted inspections of 17 weapons sites so far, and has “carried out activities related to the destruction of critical equipment” at 14 of them, according to the UN. The goal is to fully eliminate Syra’s chemical weapons supply by midway through 2014.

Now, the question is what role, if any, Syrian President Bashar al-Assad will play in the future of the country. A coalition of eleven Arab and Western countries, dubbed the “Friends of Syria,” are hoping to hold a peace conference in Geneva next month, and met today in London to hammer out the details of the proposed talks. However, some opposition groups are openly refusing to join the talks unless they’re assured that Assad will play no part in whatever transitional government emerges from the war.

"There will not be any negotiations at all without making sure that the Geneva 2 meeting is basically for the transitional period and for Assad to go," said Ahmed Jarba, chief of the National Coalition, an opposition group that attended the Friends of Syria meeting. "We are not going to sit and negotiate with Assad possibly being there...Our people would not accept that. They will consider us as traitors if we came here to sell our people."

The Geneva 2 talks, if they happen, will aim to include opposition groups and representatives of the Syrian regime. There’s also a chance Iran could be included in the discussion, U.K. Foreign Secretary William Hague said, so long as it agrees to enter the conference with the goal of creating “a transitional government in Syria made up of regime and opposition by mutual consent.”

So, in short, nothing is a done deal, but things have certainly cooled down since last month.