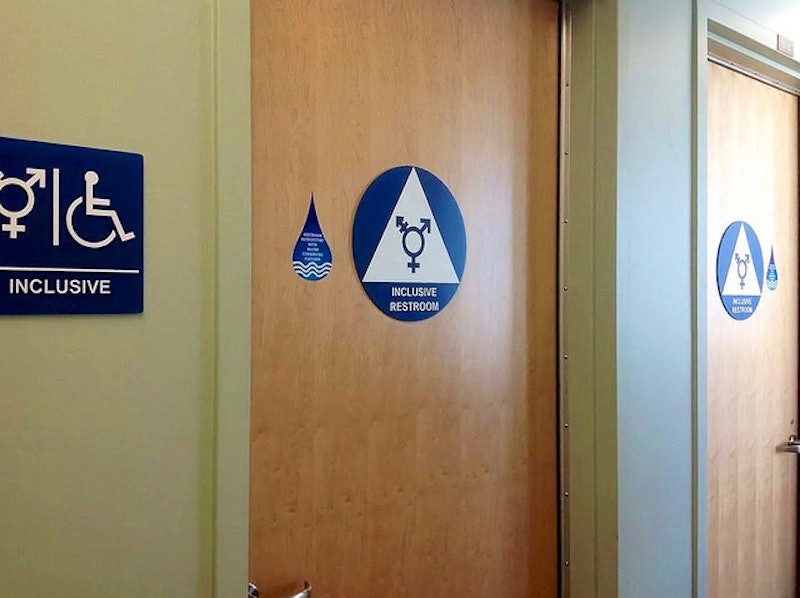 For the uninitiated, it can be incredibly daunting to even consider the topic of gender identity, and what defines someone's gender. Thanks to awesome communities online and off, those of us who do not identify with the two traditionally acceptable genders – male and female – now have tons of useful labels and abbreviations to help us better describe our individual identities. However, for those outside the community, these labels can be overwhelming. Cisgendered people might not understand what terms like "dfab" (designated female at birth) or "bigender" (identifying as two genders) mean, and while there are a good number of people who do the extra work to look these terms up, there are many others who are unable or unwilling to do so for a variety of reasons.

For non-binary folks — people whose gender identities don't fall squarely within the traditional definitions of "male" or "female" — encounters with these people often take the form of unwanted and awkward questions that can make them feel vulnerable or unsafe. Given that it is no one person’s responsibility to explain their gender identity to anyone, this can be an uncomfortable situation for everyone involved. But, that doesn’t change the fact that there are people who want answers. So, it is up to those of us (who are willing) to create as many resources as possible for people both in and outside of the community, so they can better learn our language and therefore better respect our identities.

So, to the best of my ability as one person who identifies within the non-binary spectrum, here are some of the most common questions asked about non-binary folks and their answers.

Let's start with the basics, because the questions we assume we know the answer to are often the ones we never ask, and the misunderstandings just grow from there. Our understanding what gender, and what defines it, and how it's expressed, is constantly evolving. This can be disorienting for everyone, but is ultimately a great thing because, in theory, it will lead to more people having access to a wider range of language and widely recognized identities that work for who they actually are (as opposed to trying to bend their authentic selves to fit into a painfully narrow, outdated range of overly simplistic gender options). According to the World Health Organization, gender is “socially constructed roles, behaviors, activities, and attributes that a given society considers appropriate for men and women.” Gender is different from sex in that it has no intrinsic link to anatomy. What’s in your pants does not necessarily dictate how you feel or choose to identify.

What does “cisgender” mean?

Someone who is cisgender is someone who comfortably identifies with the gender associated with their biological sex. So, for example, if you were born biologically female and are comfortable identifiying as a woman, you are cisgender.

What does “transgender” mean?

Transgender is actually an umbrella term that houses many identities under it, including non-binary identities. However, in its most popular use, transgender refers to someone who identifies with the opposite or contrary gender to their sex. So, if you were born biologically male, but feel more comfortable identifying as female, you are transgender.

OK, so what do non-binary people identify as?

Again, the term “non-binary” is an umbrella term with a few different gender identities under it, but the most basic definition for this term is people who identify as neither male nor female. These people might identify as both ("bigender"), neither ("agender"), a mix between the two ("genderfluid"), or they can be unsure of their gender ("genderqueer"). I know it seems like a lot of words, but if we can remember all the Kardashians' names, we can commit this stuff to memory.

How do non-binary people dress?

It depends on the person! Not every non-binary person chooses to dress differently from their socially prescribed gender. For example, despite identifying as genderfluid, I am most comfortable presenting as my biological sex: female. For me, clothing does not play an important role in how I express my gender identity. However, for others, it is crucial. If you're starting to see a trend when it comes to people's identity where it becomes necessary to not make sweeping assumptions and instead treat each person as a completely unique being, then you're starting to get the idea.

What pronouns should I use for non-binary people?

"He/him"? "She/her"? "They/Them"? It might not be readily apparent what pronouns a person prefers to have applied to them. The best thing you can do when unsure of how to address a non-binary person (or someone you think may be non-binary) is first to see how they refer to themselves, or how their close friends refer to them, and use those pronouns. If this isn’t possible, it is usually OK to ask, provided you do in a polite way. (Note: If the person doesn’t identify as non-binary, they might take offense to the gesture. If you fear this might be the case, try to avoid using pronouns altogether.)

What bathroom do non-binary people use? What if I see someone in the wrong bathroom?

Non-binary people will use whatever bathroom they feel comfortable in. If you see someone in a bathroom who looks different than you, ask yourself this one, very important question before confronting them or consulting an authority: Are they doing anything to make the people around them uncomfortable other than simply using the same bathroom? If the answer is no, then mind your own business and let them mind theirs. It's probably time to focus more on whether or not someone is using correct bathroom conduct than if they're using the "right" bathroom.

Some do, and some don’t. More often than not, non-binary people don’t feel comfortable labeling themselves as 100 percent male or female, so transitioning is irrelevant. That’s not to say that there aren’t non-binary people who do transition, it’s just not the majority.

What if someone I know wants to be called by a different name because they’ve transitioned or begun using a different gender identity?

Call them by it.

If gender is just a social construct, why do we need different identities? Why can’t you just be a woman who acts male and does male-associated activities?

Identifying as a different gender than what you were biologically assigned is more than just a matter of taste. If it was as easy as wearing men’s clothes and going to the football game with the rest of them, there wouldn’t be a need for a separate gender identity for dfab individuals who identify as male. Not only might they prefer male-associated aesthetics and activities, but they also may be deeply uncomfortable being perceived or treated as female. Being a “woman who acts male” or a “butch woman” does not address this important factor.

How do non-binary people have sex?

But again, the only time this should ever matter to you is if you are a non-binary person, or are looking to be intimate with one. Otherwise, you should never ask someone how they express themselves sexually. Besides, we may just tell you on our own, depending on how comfortable we are!

How can I best support non-binary people?

It might sound absurd, but honestly, treating us like we’re human beings is a really good place to start. Just because we deviate from what society deems to be “normal” in some way, doesn’t mean our feelings don’t exist. It also doesn’t mean our desire for privacy doesn’t exist. So, before asking a question about someone’s gender identity, be sure you aren’t putting them in an uncomfortable position, and ask yourself if the information you’re looking for is really necessary to you successfully interacting with them.

Bottom line: we know our gender identities can be confusing. Hello, we live with them! And more often than not, we've suffered because of them. We have had to find our own way in the messy, complicated world of gender, and many of us are still trying to figure it out. So, be respectful of our journey, and we'll get along just fine.

More like this
25 Inspiring Quotes From Black Women To Celebrate Black History Month
By Kyli Rodriguez-Cayro and JR Thorpe
Gen Z Are Twice As Likely To Identify As Queer, According To New Data
By Sam Ramsden
What The UK Blocking Scotland’s Gender Recognition Bill Means
By Sam Ramsden
The UK Government Is *Finally* Banning Conversion Therapy
By Sophie McEvoy
Get Even More From Bustle — Sign Up For The Newsletter
From hair trends to relationship advice, our daily newsletter has everything you need to sound like a person who’s on TikTok, even if you aren’t.