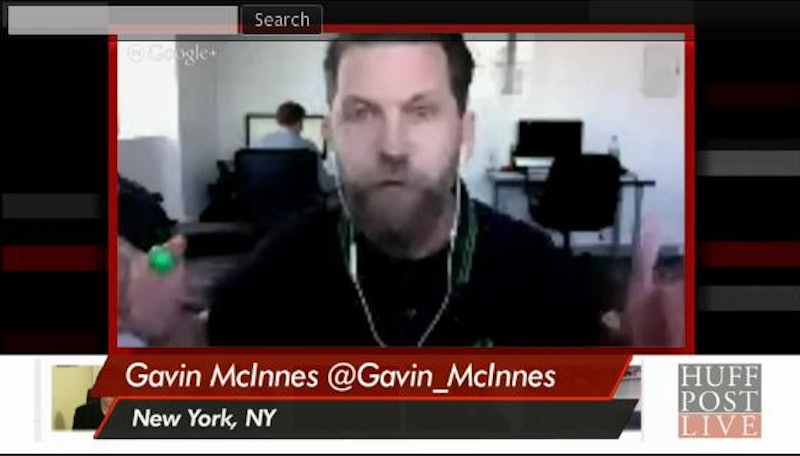 Vice magazine co-founder Gaving McInnes went on a pretty epic rant about masculinity and feminism yesterday during a segment of HuffPost Live. He's a little upset about all of us ladies "pretending to be men" by having careers and earning an income and not spending all our waking hours "shaping a life." He thinks feminism has made us "miserable" and probably only 7 percent of women would work if they didn't have to. Oh, and he thinks co-panelist Mary Anne Franks is a "f**king idiot."

McInnes—who left Vice in 2008 and now runs a men's humor website called StreetCarnage and writes for "Libertarian webzine" Taki's Magazine—started out by arguing that men have to be tough because they're "the breadwinners in the majority of cases in the Western world." He was tough just recently, he explained, when he got into a "fistfight with words" with a co-worker because, hey man, he's got bills to pay and children to feed. "This innate toughness that men have is crucial to our survival," McInnes said.

The host intervened to point out that in reality, women are breadwinners in droves in the United States and elsewhere. (Forty percent of American households with children under age 18 now have a mom who's either the sole or primary earner in her family.) McInnes countered that women are just faking this toughness because we're forced to.

They're miserable. Study after study has shown that feminism has made women less happy. They're not happy in the work force, for the most part. I would guess 7 percent [of women] like not having kids, they want to be CEOs, they like staying at the office all night working on a proposal, and all power to them. But by enforcing that as the norm, you're pulling these women away from what they naturally want to do, and you're making them miserable.

Thank goodness for Franks, a law professor at the University of Miami, who retorted that she's "pretty darn happy" as a feminist and she doesn't think she's in a minority.

When McInnes tried to interrupt, Franks just said, in stride, "I'm not done yet, Gavin," and then responded in such a calm, measured and thoughtful way that McInnes' stream-of-consciousness ranting seemed all the more unintelligible. Watch the whole thing and you'll see, she just nails it.

Of course, Franks also had the benefits of being both right and not a stark raving lunatic. She went on:

There is nothing about being tough or being aggressive or being successful that is at all related to being a male.

"What made his meltdown interesting, as opposed to merely irritating, was the naked fear and vulnerability in his voice and on his face. McInnes didn’t just provide a textbook example of the emotional weakness that so often underlies masculine swagger; he also provided an illustration of what it looks like to focus on the wrong target. McInnes sounded genuinely miserable and trapped when he talked about men having to be breadwinners to feed their families, and yet he directed his anger at people who do not conform to gender roles instead of examining the restrictiveness of the status quo. This is regrettable, because the dissatisfaction and anxiety so often produced by rigid gender roles is real and worth discussing. Relentless, baseless policing of gender roles undermines society and individual welfare, and that is a target that deserves our anger.

In a post on his site titled "In response to Whatsername," McInnes responded:

You know who’s scared of empowered women? Nobody. I live in the real world. [...] When discussing the vast majority of women, they TEND to prefer family to career and they TEND to want to make babies and they TEND to need to create them in their 20s / early 30s. This isn’t my opinion. It’s a general truth and the fact that simply stating it is controversial, shows how far the pendulum has swung into Crazy Town. PS: Go fuck yourself.