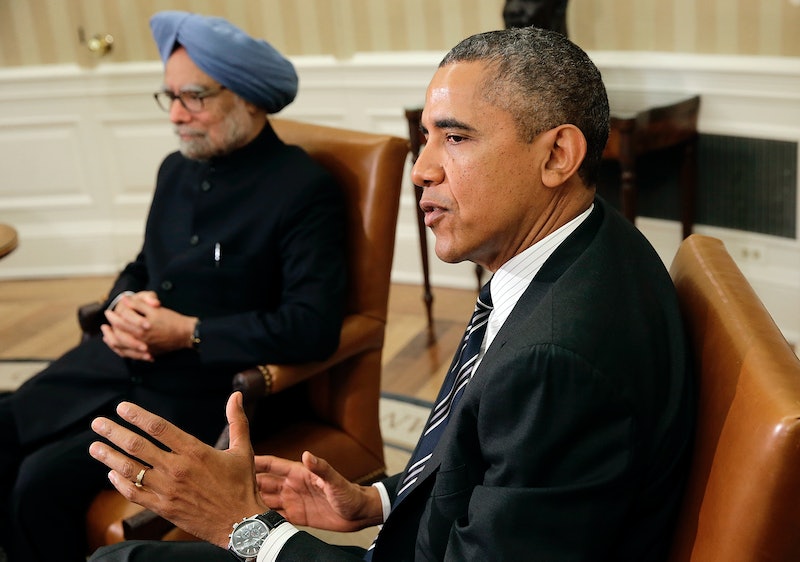 There's no clear answer as to what we should do in Syria, and according to a new report by the New York Times, President Obama's as unsure as ever. Because really, in a situation like this, everything is lots of 50 shades of grey — and every option is unsexy. This fact was emphasized by Secretary of State John Kerry's meeting with Syrian opposition groups Tuesday, as the world prepares for peace talks in Geneva next month. Despite averting a military strike, the United States has been criticized for its handling of the conflict. Even Saudi Arabia — one of America's key allies in Syria and the Middle East — has said it will scale back involvement with the U.S. over the conflict.

It seems like the current situation is the cumulative result of a lack of a firm policy stance from a leader who has yet to decide what should really be done, according to a new New York Times report.

A close examination of how the Obama administration finds itself at this point — based on interviews with dozens of current and former members of the administration, foreign diplomats and Congressional officials — starts with a deeply ambivalent president who has presided over a far more contentious debate among his advisers than previously known.

Here's what happened: Back in April, Obama secretly authorized an order that allowed the C.I.A. to begin arming Syrian rebels. Two months later, the forces were losing ground in western Syria — perhaps in part because the C.I.A. never actually shipped the weapons.

The Aug. 21 chemical weapons attack on civilians reflected a decision that hadn't been made in June, when the first word of chemical attacks against civilians was carried into the Situation Room by Secretary of State John Kerry. Officials were warned that if the U.S. didn't intervene, chemical weapons were likely to be used again. But the president and his advisors were conflicted.

Those advisers reflected Mr. Obama’s own conflicting impulses on how to respond to the forces unleashed by the Arab Spring: whether to side with those battling authoritarian governments or to avoid the risk of becoming enmeshed in another messy war in the Middle East.

And yet, again, signs of Obama's ambivalence showed after he looked to Congress for support of a military airstrike following a British refusal to participate.

A senior White House official said that one reason the president had decided to get Congressional approval was his fear that alienating lawmakers might undermine their support on other tough foreign policy issues, most notably Iran.

It finally took Russia, of all nations, to get anything done: The deal they brokered avoided American military force if Syria would allow a UN team dismantle its chemical weapons arsenal.

The decision came after Obama had announced that a team of 50 rebels, trained by the C.I.A. in Jordan, were crossing into Syria to train larger groups of rebels.

An administration that had spent nearly two years telling members of Congress it was determined to avoid direct military intervention in Syria now had to persuade lawmakers to pay for the arming and training program.

Russia's deal proved to be a better option than training rebel troops: The rebellion has diminished in strength as it has splintered, taken over by radical Islamic branches. Because of al Qaeda's predominance in the region, America's drawn away from further support out of concern some of them might be affiliated.

And so, at the beginning of October, the UN team went in.

It's part of the reason for America's partial loss of a key ally in the region: Saudi Arabia's throwing a diplomatic tantrum out of frustration with the also-indecisive UN security council — the country gave up its seat one day after being elected to the council. They're frustrated that their biggest ally (America) won't use military force in Syria.

"We know that the Saudis were obviously disappointed that the (Syrian) strike didn't take place and had questions about some of the other things that may be happening in the region," Kerry said yesterday after fairly unproductive talks with Syrian opposition groups in London.

But the partnership is a crucial one for the United States: The Western country supplies the Middle Eastern kingdom with weapons, while Saudi Arabia holds $700 billion of America's foreign assets. Right now, Kerry (and Obama, and Washington) have no choice but to remain optimistic.

"I am convinced we are on the same page as we are proceeding forward and I look forward to working very closely with our Saudi friends and allies," Kerry said.

Until then, however, the mission in Jordan has no plans for expansion, nor would it really help matters much in the long run. Furthermore, the rebel groups are splintered, the UN security council is pretty frozen, and America's key regional ally is pulling back. In this case, what, exactly, is an indecisive President — and Congress and team of advisors — supposed to do?

We'll have to wait and see.