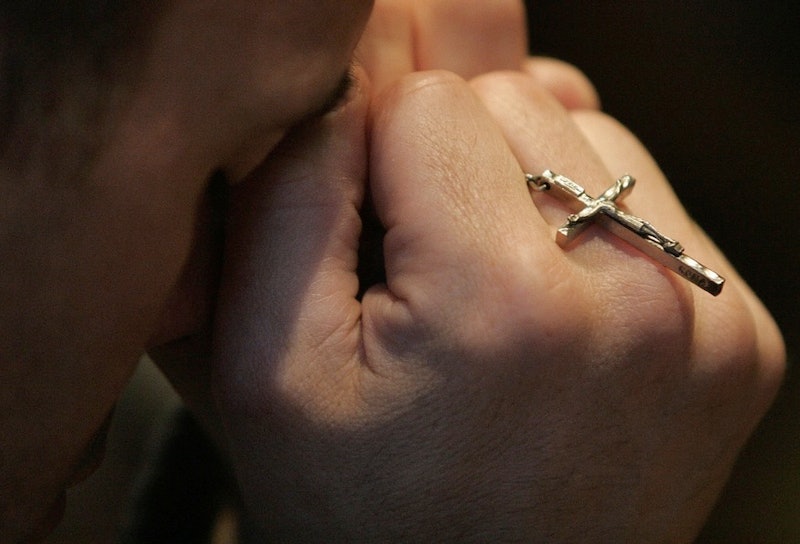 Today, the Vatican suspended Franz-Peter Tebartz-van Elst, also known as "The Bishop of Bling," for living high on the hog during his stint as the Bishop of Limburg. Tebartz-van Elst racked up a lot of expenses in the Limburg diocese: in addition to taking first-class flights to India to help the poor (and then lying about it in court), he spent $42 million, much of it provided by German taxpayers, remodeling his official residence. All of this led the Vatican to conclude Wednesday that he "can no longer exercise his episcopal duties," and to suspend him until further notice.

Two things are clear from this episode: 1) "The Bishop of Bling" would be a great name for a rap album. And 2) the Bishop's behavior shouldn't be all that surprising.

A new study out of Canada suggests that, when there’s money to be gained, religious people are more deceitful than their atheist peers. University of Regina economics professor Jason Childs took 400 students from introductory economics courses and divided them into two groups: “senders” and “receivers.”

For the study, the senders were given two different payouts — say, $5 and $7 — and then instructed to tell a receiver what the higher amount was and offer them the chance to take it. However, the senders had the option of lying about which payment was bigger, and pocketing the bigger payout for themselves.

A lot of the factors you might think would be correlated with lying — such as gender, age, GPA, amount of student debt, or socioeconomic status — didn’t affect whether or not students deceived their peers to make a couple of extra bucks. But faith did: Students who named religion as an “important” aspect of their lives were more likely to lie for a little extra money than their atheist peers. (Because ... confession?)

Unlike some of the study’s other findings — specifically, that business majors and kids with divorced parents were also more likely to lie for financial gain — this one was difficult for Childs to explain, as most religions list honesty as a pious trait (and it’s a well-known fact that the faithful never violate their religious creeds). Childs’ rather cynical theory is that the school’s religious students may feel alienated from the rest of the school’s (largely secular) student body, and thus feel fine making money off of their peers by lying to them. That is, needless to say, a pretty bleak portrait of religious thinking, but it does have the upside, for religious folk, of only indicting religious college students as hypocritical, not followers en masse.

By the way, another recent study found that men with wider-than-average faces also lie more when money is at stake. We can’t help but wonder now whether wide-faced men are more likely to take up religion. Kirk Cameron, anyone?

More like this
Where Is Former Bachelor Host Chris Harrison Now & What Is His Net Worth?
By Hugh McIntyre
Black Women's Equal Pay Day Highlights An Upsetting Problem
By Brandi Neal
Khloé Kardashian Is Reportedly Dating A Private Equity Investor She Met Through Kim
By Jordyn Tilchen and Jake Viswanath
Chelsea Clinton On The Best Advice She Ever Got From Her Mom
By Brianna Kovan
Get Even More From Bustle — Sign Up For The Newsletter