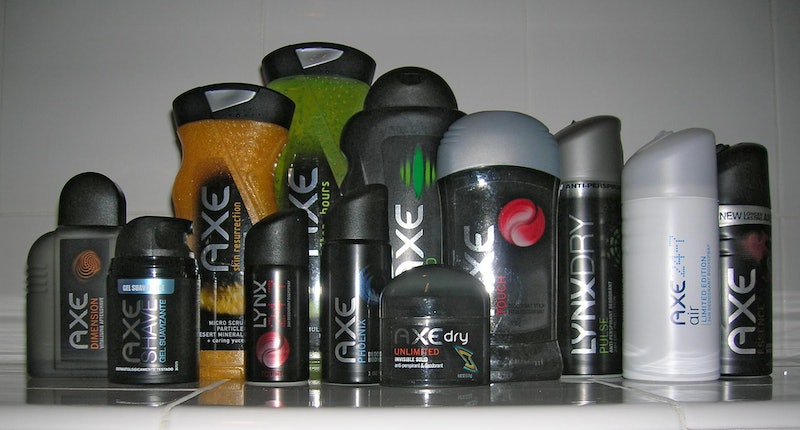 Oh, Axe Body Products for Dudes. What ever will we do with you? Well, for one female journalist, the answer is wear it every day for a week. Dahlia Lithwick writes for Slate that she, like most of us, was initially repulsed by the overpowering scent of Axe when she first smelled it — caked on her 13 year old nephew. But then one day on a family beach vacation she had nothing else to use in the shower, and in her rush, she went with the only thing available: 3 in 1 Axe. And shockingly, she says,"It was the most sublimely powerful fragrance experience of my adult life. Truly. After decades of smelling like a flower or a fruit, for the first time ever, I smelled like teen boy spirit."

She wound up wearing it every day for a week. Hey, you do you, I guess.

The particulars of her story are actually pretty funny, even the way she decided to mess with people by confusing them with her peculiar choice of fragrance. But what interests me most is something that Lithwick doesn't go into explicitly: the gender role reversal inherent here. As the author observes, women are generally supposed to smell like flowers and/or fruit (or whatever chemically created scent we're told is flowery or fruity). And really, why is that exactly? Men can't like the smell of flowers enough to wear it around? I mean, flowers smell nice; it's a thing. And apparently middle-aged women can grow to love the smell of Axe body spray.

In talking about things our society tells women they are and are not allowed to do, we rarely talk about scent. I mean, we often have major criticisms of Axe commercials and for good reason (Lithwick even says she probably wouldn't have tried this experiment if she'd ever seen any of Axe's commercials), but I know that I at least have never thought about how inherently sexist it is that Axe is intended solely for men (though they do, in their problematic way, have a product for women).

But why does that matter? Well, smell is a powerful thing. It affects us unconsciously, but it affects us none the less. Which begs the question: Is my grapefruit body wash actually reinforcing patriarchal norms? By smelling like flowers all the time, are we somehow perpetuating the idea that women are sweet and cutesy?

Though maybe the real question is why flowers and fruit are considered sweet and cutesy. From where I stand, they just smell good. Unlike, say, copious amounts of Axe body spray.

Still, it's tempting to see Lithwick's project of wearing Axe as somehow empowering. She's defying social convention, choosing something she thinks smells good even though it isn't societally appropriate for a woman to do. And then she goes around forcing people to confront it, even if they wouldn't confront her. Though she observes that few people actually said anything about her particular smell, plenty of people very clearly noticed. By wearing Axe Lithwick has changed the paradigm, flipped the script so to speak. Much as I hate Axe, I kind of like it.

Whatever we think of gender disparity in fragrance, or of Lithwick's project, though, I think we can agree that at least one good thing came out of the whole thing: her two young sons were so embarrassed they now have given up Axe products altogether.

More like this
Black Women's Equal Pay Day Highlights An Upsetting Problem
By Brandi Neal
Megan Rapinoe's Relaxation Hack Is Super Dreamy
By Carolyn Steber
This Psychological Effect Might Be Keeping You From Hitting Your Goals
By Lexi Inks
Help! I'm Not Getting Any Attention On Dating Apps. What Can I Do?
By Sophia Benoit
Get Even More From Bustle — Sign Up For The Newsletter