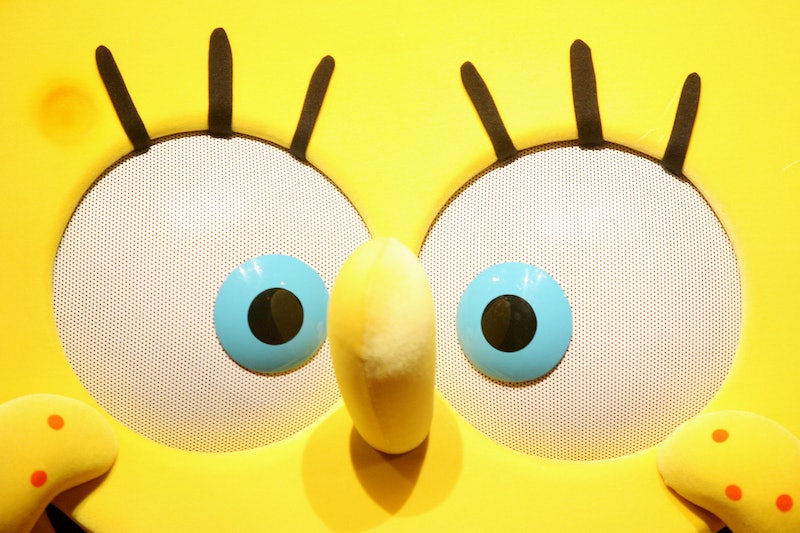 A Cincinnati, OH, cemetery just won’t let Army Sgt. Kimberly Walker rest in peace. The 28-year-old Iraq veteran’s Spongebob tombstone was removed for her gravesite earlier this month after the cemetery decided it didn’t fit in with the rest of the cemetery’s aesthetic, despite the fact that the family had discussed the tombstones — one cartoon sponge in Army gear to represent Sgt. Walker, and another dressed for the Navy in honor of her twin sister, Kara — with an employee beforehand.

Walker had served several tours of duty in Iraq and was scheduled to deploy to Afghanistan this summer. But instead, her family welcomed her body home from Colorado, where Sgt. Walker was allegedly killed by her boyfriend Montrell Mayo, another Army officer. Mayo is charged with hitting, cutting, and choking Walker when she visited him for Valentine’s Day from her base in Kansas.

At the core of this tragic story is Sgt. Walker’s love of Spongebob. She had birthday parties following that theme, and the character adorned her shower curtains. The family even says they put a pillow of the cartoon character in her casket before it was lowered into the ground, so she could spend eternity with the beloved sponge. An above-ground acknowledgment of her fondness for the cartoon seemed more appropriate to the family. They bought six burial plots to accommodate the 7,000 pound monuments, which stand at over six feet tall and even got Nickelodeon's approval.

But the day after the monuments were installed the cemetery said they would be taken down.

The cemetery issued a statement about the dispute to the local television station. “Spring Grove is deeply sorry for the issues involving the monument the Walker family recently purchased,” Spring Grove President and CEO Gary Freytag said. “As an historic cemetery, we must constantly balance the needs of families who have just suffered a loss with the thousands of families who have entrusted us in the past.”

I’m not going to argue that the tombstones weren’t garish. They were, and any six-foot-tall life-like thing would be.

But at the end of the day, that’s the fault of the initial cemetery official who approved the design. Suggesting something more tasteful — maybe a smaller Spongebob leaning on a more traditional tombstone? A Spongebob head peering out from behind a traditional tombstone? An etching, rather than the figure itself? — was certainly within the rights of the official. Making a stink after they were already up? Well, that’s just cruel.

Cemeteries are constantly changing. In Bustle’s own home borough, there are cemeteries that have been dealing with issues like this for years. Online magazine BKLYNR had a feature on a Brooklyn cemetery whose newer, more showy jet black headstones — honoring the dearly departed of the last wave of Jewish immigration from the former Soviet Union — clashed with the plain gray aesthetic of earlier immigrants. The Soviet Jews also put laser-etched portraits of the deceased on the stones, something unheard of in the cemetery before they arrived.

Unsurprisingly, those changes also prompted complaints. Amanda Cormier’s article notes that the cemetery got complaint calls. “This Orthodox guy once called me up and said, ‘What is this, a botanical garden?’ I said, ‘I saw pictures of Israel. They put flowers on the graves in Israel.’ He says, ‘That’s Israel, this is here. They’re not supposed to do that here,’” Richard Fishman, director of the New York Department of State’s Division of Cemeteries, told her. But the cemetery decided to keep the new gravestones, likely due to a combination of kindness and financial factors.

Spring Grove might be a historic cemetery, but that doesn’t mean the times don’t change. The backgrounds, religions, and, yes, sensibilities of people seeking burial are constantly changing. There are, clearly, some things that a cemetery has an interest in keeping off tombstones — like, say, swastikas and Klan symbols — but it’s difficult to imagine Spring Grove blocking Jewish families from the tradition of placing pebbles on tombstones because it violates aesthetic preferences.

Likewise, it’s unlikely that they would prevent families from leaving wreaths, candles, flowers, icons — all also things that detract from the serene green-and-marble color schemes that dominate cemeteries. Photos on Spring Grove’s website show obelisks and mausoleums; the cemetery had clearly previously acknowledged that one size does not fit all. Would a small altar also be excluded? Seems like a slippery grass slope.

Obviously, Walker’s fondness of Spongebob does not rise to the same level as a religious preference, but in some ways, its surprising that this issue has not come up before. A six-foot Spongebob, while tacky and garish, is not offensive. We place an ever-increasing emphasis on individuality, and who says that it shouldn’t extend into the afterlife?

It's still unclear what will ultimately happen with Walker's monuments, but other families have, in the past, been found to have certain rights over burial plots they've purchased. In one example, a family was able to move someone who had erroneously been buried in plots purchased by them, over the objections of the deceased's family.

As for Walker's family, they see only one viable solution: they want the Spongebobs to come back. "I feel like, and we all feel like, SpongeBob should stay there," her mother said. "We bought the plots, all six of them. We put the monuments there, we did what we had to do and they said they could provide that service to us." The cemetery, for its part, offered to replace the monuments with something deemed more appropriate at its own expense, but said that it won't restore the Spongebobs.