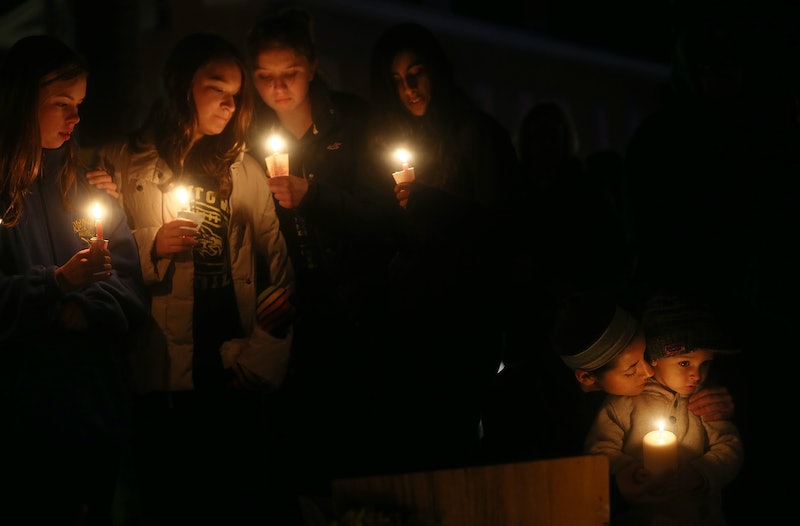 On Monday morning, a 12-year-old opened fire in a Sparks, Nevada math class, killing his teacher and himself, and wounding two other students. In the absence of any answers, and with evidence that the child had brought the gun from home, the state of Nevada is considering slapping the boy's parents with criminal charges. Likewise, urgent calls have been made for the arrest of the parents of two Florida girls who, as part of a troupe of teenagers, relentlessly bullied 12-year-old Rebeca Sedwick until she killed herself in September by jumping from an abandoned cement tower. Legally, a parent or guardian is responsible for the minor in their care — but does that make all parents liable to criminal charges if their child commits a crime?

According to the law, the answer is both yes, and no. A parent can be held legally accountable for a minor's crime, but only if there's evidence that they could have prevented the crime, and didn't. For example, if evidence emerges that the unnamed Nevada shooter had threatened to use the gun on other people, and his parents hadn't locked up their weapons in response, then the boy's parents could be criminally liable for his crime. The degree of parental culpability differs from state to state, but the parent-child relationship in itself doesn't make a parent responsible for the crime.

But things can quickly get complicated from there.

Take Rebecca Sedwick's unnamed bully, whose stepmother, Vivan Vosburg, was recently charged with child abuse after a video emerged on Facebook of Vosburg beating a boy. It becomes easy to make the link: bad parenting leads to bad behavior from a child who doesn't know any better. After all, children who suffer neglect and abuse are exponentially more likely to commit crimes than those who grow up in healthy family environments.

City councils in Texas and Oregon have experimented with an automatic parental fine when minors commit low-level crimes — juvenile crime, truancy — and the policy's seen some success. (Repeated violent crimes dropped in San Antonio, Texas after parents saw that they were being held financially accountable. )

Parental accountability might be a viable crime-fighting tactic, but that doesn't make it a responsible move: after all, if kids grow up learning that they can do anything they want and their parents will be the ones blamed, what's to stop them from committing crimes? How are children to learn to take responsibility for themselves if the onus of legal responsibility throughout their teenage years lies on their parents?

The problem with the cases in Nevada and Florida is that there's a lot of blame to go around, and nobody clear to pin all of it on. In Sparks, the shooter died, and no one will ever really know what was going through his head. In Florida, the two girls responsible for much of the bullying against Sedwick won't receive a harsh sentence — especially since they've only been charged with felony aggravated stalking, instead of the more severe charge of manslaughter.

The knee-jerk reaction in these cases is that someone should pay, and heavily so. But it's very difficult to claim that a 12-year-old was fully aware of the impact of his or her crime. So the blame automatically shifts to the parent, who should, the argument goes, have been capable of stopping their child from killing with a handgun or physically and emotionally bullying to the point of suicide. It's an instinctive reaction, and a growing trend, but that doesn't make it ethically sound.

To be a parent is to take on a lot of responsibility, legally and morally, but a parent can't be the go-to party for everything that a child does wrong. After all, if they were, the legal system would have a huge ethical dilemma on its hands: Can you justify punishing a person for somebody else's crimes, especially if they played no part in the crime and wasn't aware it would occur? If the goal of incarnation (a widely debated point) is punishment, can you ethically punish someone for something they played no part in? Could a parent ever make the argument that a child was simply bad?

According to the law at present, for a parent to be held responsible for a child's crime, the parent:

In other words, parents must have had to have known the crimes their child was capable of, and not tried to stop them from occurring. Meaning a parent must be almost an accessory to crime — deliberately allowing it, deliberately ignoring warning signs — in order to be responsible for it. If that isn't true of the parents in Nevada and Florida, then they should not be legally charged, as much as the public might want them to be.