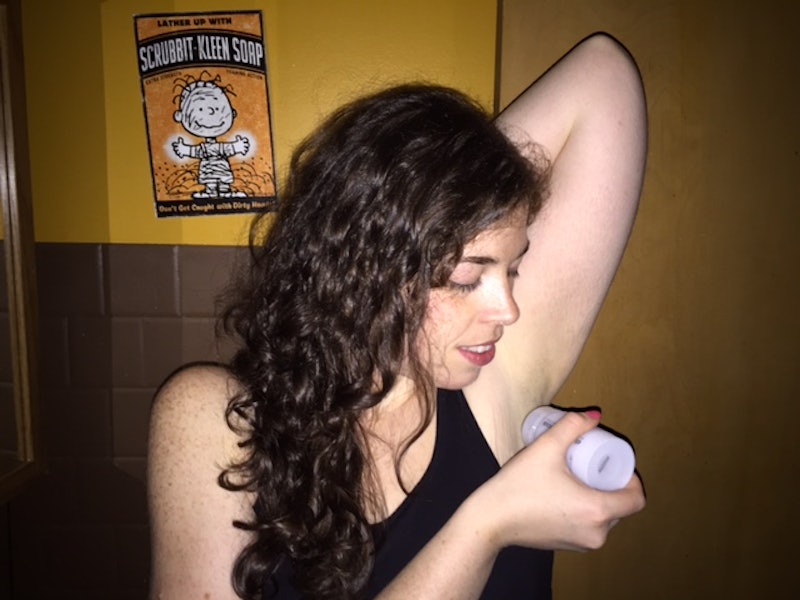 From the moment you first get a whiff of your own body odor or notice that your stress sweat affects your confidence, you’ll forever be paranoid about controlling the chaotic consequences of perspiration. Nobody likes sweating a lot, especially in situations that don’t normally inspire perspiration for others, but that’s where deodorant comes to the rescue. Deodorant improves the air quality of locker rooms everywhere and has saved every single one of us on a first date at least once in our lives. Speaking as someone who’s forgotten — on more than one occasion — to swipe on some deodorant when she’s running late, I can’t imagine wearing nothing to help neutralize my body odor, but like any other person who reads Internet articles and wants to take care of her body, I’ve heard some pretty troubling things about my trusty roll-on.

Before I go on, did you know that there’s a difference between antiperspirant and deodorant? Prior to writing this article, I didn’t. I thought they were interchangeable terms, and as it turns out, most of the time they are, but there is a distinction between the two. “Antiperspirant” refers specifically to products that are intended to control how much you sweat.

Antiperspirants typically use aluminum in some form. If you check your roll-on, you’ll probably find the active ingredient is something with a long, scientific name like aluminum zirconium tetrachlorohydrex (found often in roll-ons) or aluminum chlorohydrate (common in aerosol antiperspirants). The aluminum in antiperspirant creates a temporary little plug in your armpit sweat glands, which is what keeps you from getting super sweaty.

Deodorant, on the other hand, is scented like summer rain and provides the fragrance buffer that keeps your gym buddy from smelling you when you’re on the treadmill. Deodorants are antibacterial, too, because that’s what actually causes that sweaty smell we all dread. A certain kind of sweat combines with the bacteria on your skin to produce body odor. Most deodorants are both deodorants and antiperspirants, so if you didn’t know there was a difference, you’ll be relieved to learn that all your roll-on experiences likely haven’t all been under false pretenses.

Whether it’s conclusively linked to certain health issues or not, I’m not sure how I personally feel about aluminum being in my deodorant. Admittedly, if my diet is any indication, I can be pretty laissez-faire about the things I’m putting into my body, but whenever I can, I like to use (and eat) things with more natural ingredients, the kind that don’t make me wonder things like, “Is it really okay that soda cans have something in common with what I put on my arm pits every morning?” I decided to see how natural deodorant stacks up against the clinical protection roll-on I've been using for years.

My First Experience With Natural Deodorant

There are a variety of natural deodorants out there, but after doing some research, I decided to try Dermalogica's Environmental Control Deodorant. It's formulated for sensitive skin and made using essential oils, and it most notably doesn't contain aluminum or alcohol. It cost $22 for a 2.25 ounce roll-on at my local Ulta. I'll admit it stung to pay more 20 twenty bucks for something that I smear on my armpits and forget about, but I needed to know if going natural was worth it.

The deodorant I've used in the past has been the white, creamy kind that gets stains all over your tight, black shirts, so I was glad to see that this particular formula of natural deodorant was more a gel that seemed less likely to leave that pesky residue behind. When I tested it on my fingers and the back of my hand, I was surprised by how smoothly it went on and how quickly it dried with nary a clump or streak to be found.

But we need to talk about the smell, because it's not for everyone. It smells like oils. If that isn't descriptive enough, let's just say it smells like chamomile tea mixed with what I imagine the waiting room smells like at a holistic massage therapist's office. It's not overpowering, but if you're not big into herb-y, natural smells, you may not like it. My boyfriend said it smelled like lemon to him, but I disagree.

My Week Of Natural Deodorant

Before getting into how the natural held up to my routine, you should probably know a little more about my sweat situation. My daily commute consists of walking a mile and a half and taking the train. I do a combination of strength training and cardio six days out of the week for 30-60 minutes. I stress sweat pretty much whenever I'm worrying about a deadline, thinking about my life, wondering if the barista is judging my order, and making small talk with anyone at any time. Yes, I get sweaty, so I began my natural deodorant week fully expecting to transform into Pig Pen from Charlie Brown for the next seven days. But it wasn't as bad as I thought it would be.

During the first few days of the week, I was very aware that I smelled like I had just gotten a massage. I smelled oily, and though no one else seemed to notice, being able to smell my deodorant without sticking my nose in my armpit was an adjustment. I caught myself doing casual sniff checks throughout the day, because that foreboding question kept echoing in my mind, "Does natural deodorant really work?" I worried I was going to learn the hard way that it didn't.

It wasn't until after hitting the gym the first day that I really noticed the difference between my old aluminum-filled deodorant and this natural deodorant: My armpits were so wet by the time I hit the shower. I'm used to moderate armpit sweat levels, but not like this. I was sweating like someone on a gluten-free diet at Olive Garden. For the amount of moisture seeping out of my under-arms, it felt like I hadn't worn any deodorant at all.

As the week went on, I can't say that the wet armpit feeling improved, but I got used to it. If nothing else, with all the sneaky causes of body odor out there, I took some solace in the fact that, at the very least, I could identify the cause of mine if it became overpowering. That liberated armpit feeling became familiar. It stopped feeling like something was wrong and just became one of those things that you get used to, like the awareness of wearing a strapless bra.

By the time I got to days 5, 6, and 7 of the experiment, I had accepted that natural deodorant was lighter and a lot more sheer than any deodorant I had used in the past, but that didn't mean it was any less effective. Admittedly, by the time I took my bra off at the end of each day, my armpits did have a faint odor to them that I normally wouldn’t have experienced with my traditional roll-on, but it didn't seem like such a big deal. In fact, more than anything, I was surprised by just how much my old deodorant was blocking out. Don’t get me wrong, it’s great that deodorant is formulated to be so effective, but is it really good for our bodies to be keeping all that moisture in? As much as I hate feeling moist under my arms, could some extra perspiration be better than the chemically-induced sweat suppression I’m used to?

My week of using natural deodorant ended a few days ago, but I’ve still been using it since then. Yes, that does mean I get sweatier than usual on the train and at the gym, but it’s worth it for me. Natural deodorant may not be for everyone, but if you’re thinking of giving it a try, go into in being aware that your sweat experience won’t be the same as it would be when you apply a deodorant that uses aluminum as the antiperspirant. It’s going to be different and uncomfortable at first. And you will be paranoid about B.O. for at least a day.

Comparing natural deodorant with the average roll-on is like measuring powdered foundation using liquid foundation’s standards. Each product provides a distinct type of coverage, and depending on your needs, one might suit your lifestyle better than the other. The same is true of deodorant. But don't let me or or anyone else talk you into what you should be putting on your pits. Consider your health concerns and how much you sweat and go from there. As for me, I’m going to try to stick with the natural deodorant, because even though my arm pits are a little wetter and more susceptible to odors, it’s worth the peace of mind to know that no chemicals are keeping my armpits from fully expressing themselves.

More like this
6 Asian Beauty Rituals That Will Soothe Your Skin, Scalp & Mind
By Jennifer Li
Instagram & Facebook May Finally Lift Their Notorious Nudity Ban
By Allie Fasanella
13 January 2023 Beauty Launches Our Editors Can't Get Enough Of
By Rachel Lapidos
I Tried Peace Out Skincare's Acne Day Dots Under Makeup & I'm Impressed
By Olivia Rose Rushing
Get Even More From Bustle — Sign Up For The Newsletter
From hair trends to relationship advice, our daily newsletter has everything you need to sound like a person who’s on TikTok, even if you aren’t.