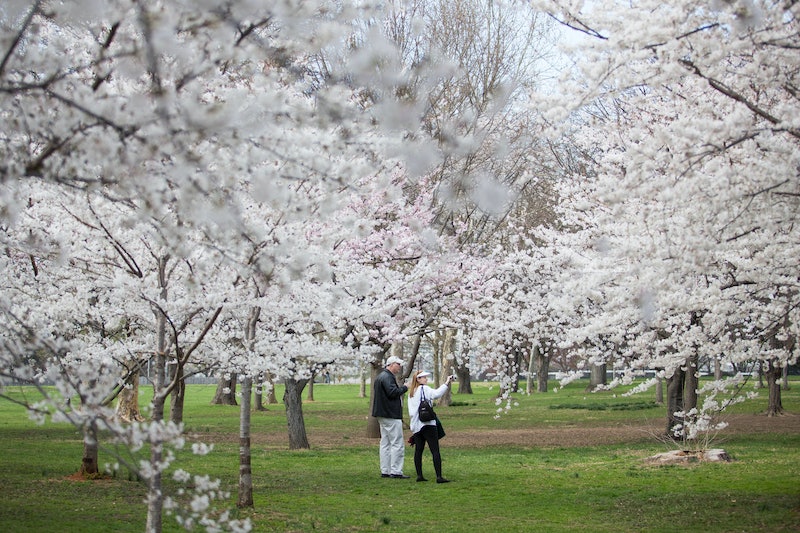 If you want to know if he loves you so, it's in his walk, according to one new study. Washington researchers found that men slow down significantly when walking next to women they're dating, compared to walking alone or with friends.

An energetic dilemma! So how do our lovebirds solve this? To find out, the researchers recorded the speeds of individuals walking around a track alone, with a significant other (holding hands and not holding hands), with friends of the same sex and with friends of the opposite sex. The study was pretty small, with just 11 women and 11 men (ages 18 to 29), where each male participant was married to or dating a female participant.

The walkabouts showed that men slowed their pace significantly when walking next to a woman they were romantic with. But their speed remained the same when walking next to opposite- or same-sex friends. A few potential reasons for this seem obvious: Greater levels of engagement (physically or conversationally) when walking next to significant others; a (conscious or unconscious) desire to match pace. But according to the researchers, these findings suggest (sigh) reproductive strategies.

Because the male carries the energetic burden by adjusting his pace (slowing down 7%), the female is spared the potentially increased caloric cost required to walk together.

In other words: He slows down so you can save all those calories for baby-making!

From an energetics perspective, this is the expected outcome since the female reproductive system is sensitive to even the slightest energetic perturbations. If a female is in negative energy balance, ovarian function may be stifled. [...] In order to protect the fertility of females, males may bear the energetic penalty to walk at the females’ paces if they are walking together, and are more likely to bear this burden with a romantic partner than with another female.

Beware the guy friend who starts slowing his gait around you, ladies.

“By men slowing down, the female reproduction is protected, and that’s not something that is trivial," anthropologist and lead researcher Cara M. Wall-Scheffler told the Los Angeles Times. “There is so much data that when women are able to reduce the amount of energy they spend walking, they have more children.”

So ... she's suggesting that walking is ruining our fertility now? Back to the fainting couch, y'all.

More like this
Are Quality Time & Gift-Receiving Love Languages Compatible?
By Lexi Inks
The Differences Between Polyamory & Open Relationships
By Lexi Inks
The 19 Best Tweets & Memes About Bisexual Awareness Week
By Lexi Inks
20 Women Reveal Exactly How Long It Took Them To Get Over Their Ex
By Amanda Chatel and Lexi Inks
Get Even More From Bustle — Sign Up For The Newsletter