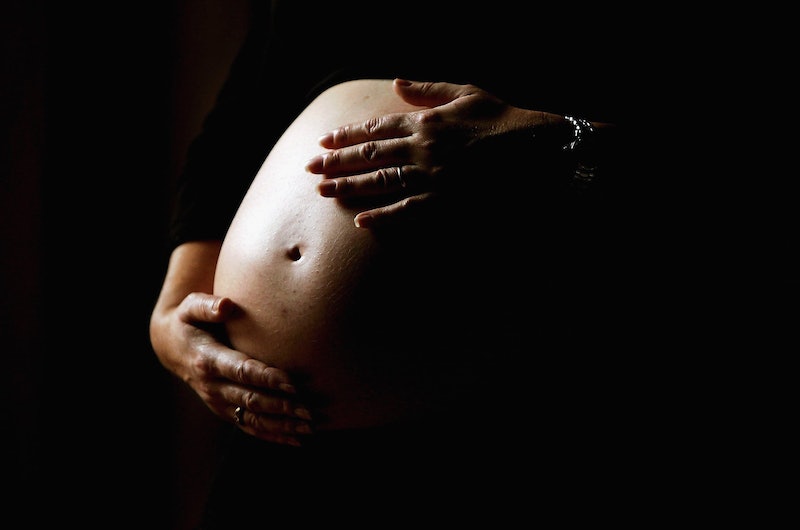 When Wisconsin's so-called "cocaine mom" law was passed in 1998, it was meant to protect babies whose mothers cannot even protect themselves. Lauded by right-to-life groups, it has recently taken a controversial turn earlier this month when National Advocates for Pregnant Women (NAPW) filed a federal lawsuit challenging the law. As the face of the lawsuit, 28-year-old Alicia Beltran was profiled in a New York Times article Thursday.

At her first prenatal checkup, Beltran disclosed that she had been addicted to Percocet the previous year, but was able to wean herself off of it by herself and with the help of a friend's prescription of Suboxone, an opiate blocker. But two weeks later, she says officials came to her house after she refused to go back on a legal prescription treatment. She was handcuffed and told in court that a lawyer had already been appointed for her baby.

“I didn’t know unborn children had lawyers,” recalled Ms. Beltran, now six months pregnant, after returning to her home north of Milwaukee from a court-ordered 78-day stay at a drug treatment center. “I said, ‘Where’s my lawyer?’ ”

Even though Beltran had no traces of drugs in her system when she was ordered to the treatment clinic, officials had the authority to confine her due to the law's wording about mothers who refuse to accept treatment.

Wisconsin is one of four states, along with Minnesota, Oklahoma and South Dakota, with laws specifically granting authorities the power to confine pregnant women for substance abuse. But many other states use civil-confinement, child-protection or assorted criminal laws to force women into treatment programs or punish them for taking drugs.

The law is a "a bunch of crap," according to Wisconsin neonatologist Dr. Steven Leuthner. In a 2005 article in the Racine, Wis., Journal Times, Leuthner says that the law criminalizes mothers instead of treating them like patients. He expresses concerns that it drives women away instead of being honest and open with doctors about their problems, which most likely occur prior to pregnancy.

In 2011, the American College of Obstetricians and Gynecologists said that “incarceration and threat of incarceration have proved to be ineffective in reducing the incidence of alcohol or drug abuse” and that mandated testing and reporting lead women to avoid prenatal care that “greatly reduces the negative effects of substance abuse during pregnancy.”

In Alabama, a law intended to protect unborn babies from meth labs has actually prosecuted more than 100 women for other drug and alcohol offenses, sending some new moms to prison. So where does that leave their children? And what are the long-term psychological, economic, and societal effects of locking up new moms in prison?

According to a 2012 New York Times Magazine article, Alabama prosecutor Mitch Floyd wholeheartedly defends the law, saying that it's "our job" to sometimes protect babies from their mothers. But Brown University's Dr. Barry Lester encourages prosecutors to understand that "addiction is a disease of the brain." Lester says that like other mental illnesses, addiction is treatable.

For Beltran, it seems that implementation of the law has done more harm than good. Her stay in the clinic caused her to lose her job, she says. With her baby due in January, she's hoping to scrape together some money doing seasonal work to support the child. She says she remains close with the baby's father.

"Cocaine mom" laws my be needed in the most extreme cases, like when the life of the child depends on it. According to a recent study, prescription drug deaths for newborns are on the rise: From 1991 to 2007, the rate tripled — and was due to painkillers like Vicodin and Oxycontin.

But Beltran's case seems to be a waste of government resources and time. And perhaps worst of all, Beltran lost her independence. She was probably very proud that she had the will to beat her pill addiction on her own, even before she knew about her pregnancy. Why should she be concerned about how she will support her child, when she admitted her problem to protect the child's health in the first place?