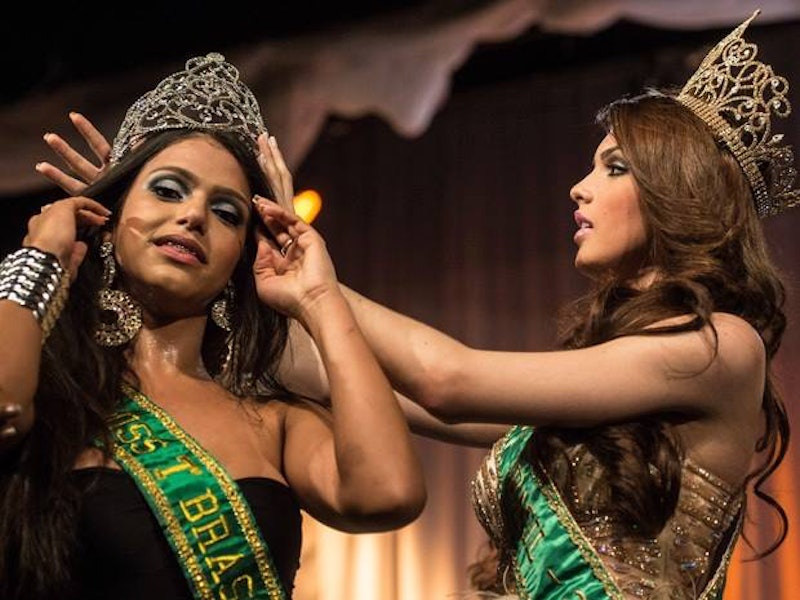 Are beauty pageants for trans women liberating, or do they turn back the clock for female-identified people? The second annual "Miss T" beauty pageant, which took place in Brazil earlier this week, raised that question.

Along with the crown, winner Raika Ferraz, who is transgender, was awarded an all-expense-paid trip to Thailand for the international version of the contest, Miss International Queen 2014. Ferraz was also offered the opportunity to have a sex change operation in Bangkok. "Ferraz, however, demurred," the Daily Beast reported, "creating an instant buzz across the gender-bending spectrum where genital surgery is often held up as the final passage to freedom for those convinced they were born in the wrong body. 'I love being the way I am,' she said."

Which, it turns out, might not be totally true. “I’ll get my nose done and a bit of botox. I also think I’m a little bit fat,” Ferraz told Neto Lucon, an LGBTQ website.

The Miss T competition certainly plays an important role in drawing attention to the issues surrounding trans communities. Marjorie Machi, one of the pageant organizers, told the Daily Mail, "There are still a lot of transvestites and transsexuals who suffer discrimination by being refused for a job, by not being able to use the name they choose for themselves, and by being the subject of homophobic violence and abuse." For the 28 transgender and transsexual participants who competed for the crown, the pageant was almost definitely about trans pride and freedom of expression.

But Miss T is still a beauty pageant, which means it still pushes a restrictive — and restrictively "feminine" — beauty ideal on both contestants and viewers. This agenda, intentional or not, is evident especially in the contest's private sponsors. While the Rio government put up 70 percent of the contest's budget, funding also came from fashion designer Almir França, a Brazilian cosmetic surgery company, and the Kamol Cosmetic Hospital in Bangkok.“I’ve seen beauty contests and competitions for Miss all over the world, but never have I seen any as feminine as this year’s crew of transgender models,” Di Castro, a famous Rio transvestite stage artist and singer, told the Daily Beast.

All of which seems to run counter to the acceptance of gender fluidity that is a hallmark of many trans communities. A transgender person is, by definition, someone who does not identify with their biological gender. A transgender person may choose to identity as man, woman, both, or neither.

The way the Miss T pageant has been covered by some media outlets reflects how far we still have to go in shifting mainstream perceptions of beauty to accommodate a multiplicity of gender identities and sexualities. The Mirror reported the "glamourous transgender girls [...] battled it out [...] there was sure to be tears and tantrums backstage." The Daily Mail described Miss T as "the competition where everyone wants to win the booby prize." Other news sources, like the Vancouver Sun and CNN, simply avoided any discussion of the issue and only published photos of the competition.

While Miss T reflects significant progress and increased tolerance, it also perpetuates a single cookie-cutter model of femininity for female-identifying individuals. Contestants are invariably assumed to be glamorous and catty, to love walking in high heels and fear broken nails. In order to be truly groundbreaking, Miss T and other trans beauty pageants would need to vastly expand their definition of what constitutes beauty in the first place.