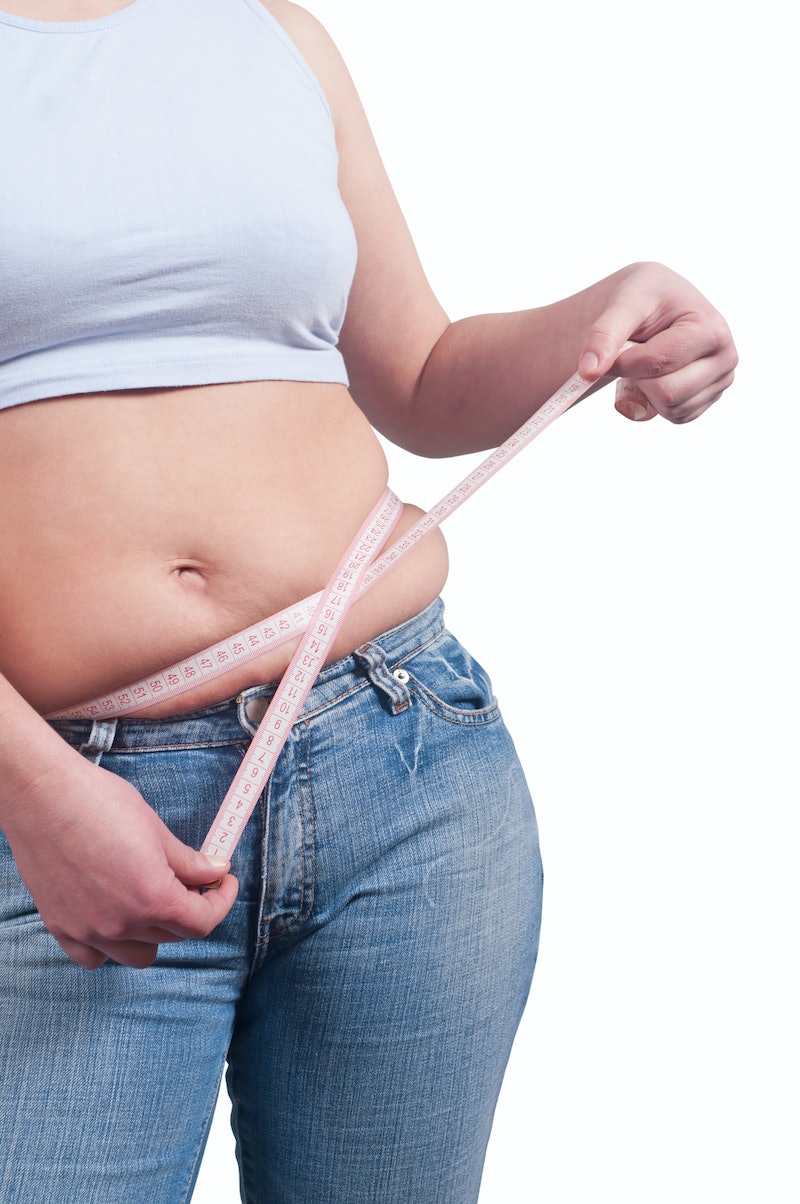 One of the most common struggles that comes with being plus-size, whether you are a man or a woman, is the assumption that you are unhealthy — the assumption that size 100 percent, without a doubt, correlates to health, and that if you’re overweight even in the slightest, there must be something wrong with you. You must have high blood pressure or diabetes. You must not be able to step on a treadmill to save your life. You must just be a heart attack waiting to happen.

Being overweight has been called a “chronic disease.” We hear about the “obesity epidemic” on a daily basis. And if our Body Mass Index is over a 25, we are automatically considered overweight and thus unhealthy – even though BMI is a generic number based on height and weight alone, and doesn’t take into account bone structure or genetics or actual health in any way. It doesn’t reflect the results of a blood test, heart exam or anything that would actually indicate health or fitness. It just exists to facilitate human characterization – to put people into boxes.

So when a doctor tells you that you are unhealthy because of your size before he/she even tests your blood pressure or cholesterol or heart rate, it’s almost expected. We overweight women have conditioned ourselves to live with that. But when a doctor tells you that because you are overweight, you must inevitably be dealing with the five stages of grief — i.e. Kubler-Ross’s analytical process of grieving — that crosses a line.

In a recent Huffington Post Canada piece by Dr. Arya M. Sharma, Chair of Obesity Research and Management at the University of Alberta, we were informed that people who are obese deal with the five stages of grief in the exact same way as someone who has suffered the loss of a loved one would, or someone diagnosed with terminal cancer. According to Dr. Sharma, obesity is in fact a “chronic illness” and so it must be accompanied by denial, anger, depression, bargaining and acceptance. To sum up his points, obese people react to their “condition” as follows:

So what we learned from Dr. Sharma is that fat people are deluded, self-hating, self-deprecating, depressed and angry human beings. They hate themselves; they hate other people; they hate everything. They should all be seeing therapists.

Now, one can kind of, maybe, understand why Dr. Sharma would reach this conclusion. The fact of the matter is that he works in “obesity management.” The men and women who approach him are probably those hoping to lose weight and make mega lifestyle changes. But common sense would indicate that just because some people feel happier and healthier at a lower weight does not mean that all people do. It doesn’t mean that anyone who classifies as obese (a vague term in and of itself because it’s based on BMI) is unhappy or angry or in denial. And even if an overweight person is unhappy or angry, common sense would suggest that the constant ridicule and stigmatization surrounding fat people is a factor in those emotions.

To say that someone who is fat must be dealing with the five stages of grief is nothing less than utterly bizarre. The despair that comes with losing a loved one or being told you have a terminal illness is simply not in the same category as being fat. Death, whether that of someone you care for or the possibility of your own, is a tragedy. Being overweight or even “obese” don’t have to be – unless you choose to make them so.

Dr. Sharma’s five stages also suggest that only those who are overweight are at risk of diabetes or sleep apnea – that those who are overweight don’t exercise – that those who are overweight have two options: lose weight and be happy, or stay fat and live a dark, misery-ridden life in a wide, solitary bubble. Based on his observations, one would honestly believe that this man has never met a happy fat person. And honestly, if that’s the case, you can’t even be mad. You can be upset, however – saddened by the fact that someone could go a whole life under the false illusion that how much you weigh decides not just how healthy you are, but also how happy.

In terms of the comments section, reviews on his article were mixed. You had the fat shamers here and there, agreeing with the theory that all fat people are unhappy and just feigning otherwise: “That’s what ‘fat acceptance' is all about, just give up, say nothing can be done and pretend you are happy that way.” But there were also the readers who became enraged at the comparison between being fat and being in a serious grieving process: “Comparing depression and obesity is absurd. Depression comes from a chemical imbalance in the brain, while obesity comes from what we eat, why we eat and how we eat. All personal choices manifested through just that.” And there were comments in between. But for the most part, people either related to Dr. Sharma’s theory, or detested it with a fiery passion.

When it comes down to it, people who are fat and happy are sick of being told they are liars. Celebrity fitness trainer Jillian Michaels went on a similar rampage a month back. And there are plenty others like her who feel the same – who feel that overweight people must be filled with hatred towards themselves and others – but who reach these conclusions because again, they work in a field where the only fat people they meet are those hoping to lose weight (Michaels works for The Biggest Loser, after all) and assume that that select group of people represents all the fat people of the world.

To put it bluntly, that just isn’t true. And those who convince themselves that fat people are all miserable humans are honestly the deluded ones. One starts to ponder whether they have to believe that in order to excel in their designated fields. But that’s the tragedy – not being fat – but being blinded by a close-minded, uneducated, poorly researched assumption. Or, by never being introduced to someone like Nicolette Mason or Ashley Fink.

More like this
This Psychological Effect Might Be Keeping You From Hitting Your Goals
By Lexi Inks
The 19 Best Tweets & Memes About Bisexual Awareness Week
By Lexi Inks
5 Ways To Help People Impacted By Hurricane Ian In Cuba & Florida
By Emma Carey
Help! I'm Not Getting Any Attention On Dating Apps. What Can I Do?
By Sophia Benoit
Get Even More From Bustle — Sign Up For The Newsletter