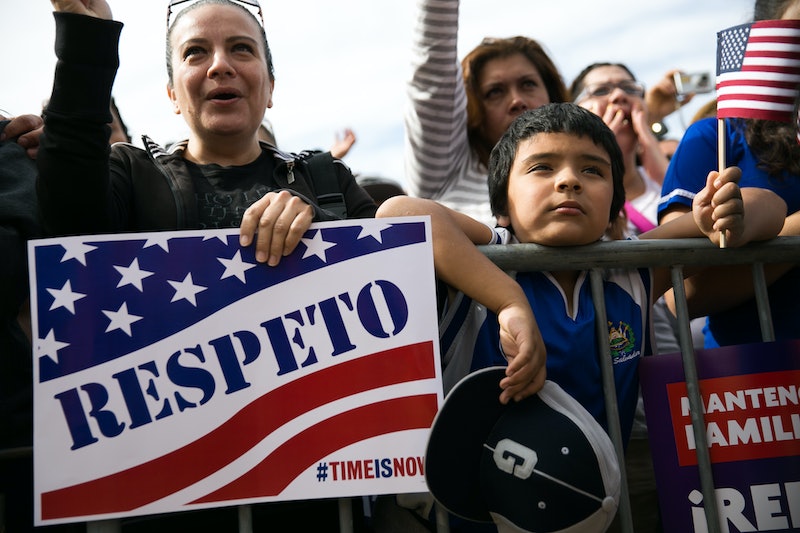 On Thursday, President Obama gave a speech urging Congress to finally pass comprehensive immigration reform. He’s been pushing reform for a while, and some Republicans, having realized last year that caustically alienating an entire demographic for decades actually does have electoral consequences, are on board as well. The Senate, largely at the urging of Marco “Remember This In 2016” Rubio, passed immigration reform earlier this year. But the House hasn’t acted on it yet, and until they do, reform isn’t going anywhere.

The 11.7 million-dollar question (actually, make that 11.7 million undocumented people question) is obvious: will immigration reform actually pass this time? There a lot of factors working for it — and just as many working against it. Let's break it down.

Surprisingly, immigration reform does have the support of some House Republicans, including Speaker John Boehner. The problem, as was made clear during the debt ceiling showdown, is that Boehner is biologically incapable of doing anything that upsets the most conservative members of his caucus unless threatened with global catastrophe, and conservative House Republicans generally oppose any immigration reform that allows immigrants to become citizens (the horror!).

“I would not give what I call a ‘special pathway to citizenship’ to anyone who's illegally in the United States,” said Representative Bob Goodlatte, slyly using the word “special” to imply, incorrectly, that reformers support giving some sort of preferential treatment to immigrants. His sentiment is common amongst the Tea Partiers in the House, and this is the single biggest obstacle in the way of comprehensive immigration reform.

In most situations, the House Majority leader is a standard-issue Republican obstructionist, but now, he’s crafting legislation that could open a window of opportunity for immigration reform in the House. Cantor’s bill, the so-called “KIDS Act,” would give citizenship to immigrants brought into the country as children. For proponents of comprehensive immigration reform, this isn’t nearly enough, but it is something, a step in the right direction. Furthermore, it could conceivably be expanded after it passes, in what’s called the conference committee between the House and Senate. This is what some reform proponents are hoping for.

What’s more, the KIDS Act may just have a chance of winning over House Republicans. Representative Aaron Schock opposes comprehensive reform but supports the KIDS Act, and says that a lot of his colleagues do, too. Cantor is even drafting the legislation with the aforementioned Goodlatte, so it’s possible this could provide a narrow path to a broader reform effort.

Obama made it clear early this year that immigration reform would be the big legislative kick off of his second term. Then the IRS scandal happened (remember that?), followed by the Edward Snowden leaks. Not long thereafter, chemical weapons were used in Syria, which was quickly overshadowed by the government shutdown and debt ceiling standoff. Immigration reform got shelved.

Regardless of to what degree Obama is at fault for those various crises, he’s had to devote significant time and energy to dealing with each of them, and that’s time and energy that he isn’t devoting to immigration reform. He’s already effectively spent 25 percent of his second term in damage control mode; anything could conceivably derail this latest effort.

We never thought we'd put the phrases "government shutdown" and "good sign" together. To explain: If Boehner put the Senate’s immigration bill up for a vote, it would likely pass with a majority of Democrats and minority of Republicans voting for it. Boehner probably won’t do this; instead, he’s expected to follow his standard legislative strategy, which consists primarily of cowering helplessly before the Tea Party and passing bills he knows will get vetoed. However, there’s a school of thought that he might just take a different route this time.

The government shutdown and subsequent debt ceiling crisis were the result of Boehner acquiescing to the most conservative members of the House, and that episode caused massive damage to the Republican brand. This irrefutable fact, some theorize, gives Boehner cover to bring up the Senate bill over the objections of the Tea Partiers. In addition, smarter House Republicans might also see immigration reform as an opportunity to help repair their image in the eyes of the electorate. It’s optimistic, sure, but it’s not a completely insane thought.

Suppose a majority of House Republicans came to their senses and realized that passing immigration reform is both good, compassionate policy, and smart politics. It’s a stretch, sure, but let’s just pretend for a minute. Even if that happened, it could all be thwarted by the Heritage Foundation, one of several conservative think tanks that wield Rasputin-like power over how conservatives in the House cast their votes.

Heritage — which urged Republicans not to vote to raise the debt ceiling — has already come out against any sort of immigration reform and is urging Republicans to avoid even negotiating with the president on it. The sway these organizations have over Republicans can’t be overstated: During the debt ceiling crisis, Heritage president (and former senator) Jim DeMint was nicknamed “The Shadow Speaker” and the “GOP’s true leader” for the outsized influence he and his organization hold over House Republicans.

Progressives aren’t used to using “big business” and “good” in the same breath, but immigration is one of those issues that makes for odd political alliances. Expanding the pool of available talent by 11 million people has obvious appeal to business leaders, and many of them are already pressing Congress to pass immigration reform as a result. A business group called Partnership for a New American Economy has mounted an aggressive lobbying campaign on Capitol Hill, and even Grover Norquist — traditionally no friend to the liberal cause — has rallied for Republicans to pass immigration reform.

The support of the business community could be key, as they make up most (all?) of the Republican Party’s financial base. If they put enough muscle behind immigration reform — by, say, pledging to withhold campaign funds from Republicans who vote against it — it could be enough to convince recalcitrant Tea Partiers to support it.

Unfortunately for all the people whose lives depend on it, we'll just have to wait and see whether the good or the bad signs for immigration reform prevail. Let's just hope it's not the ugly.