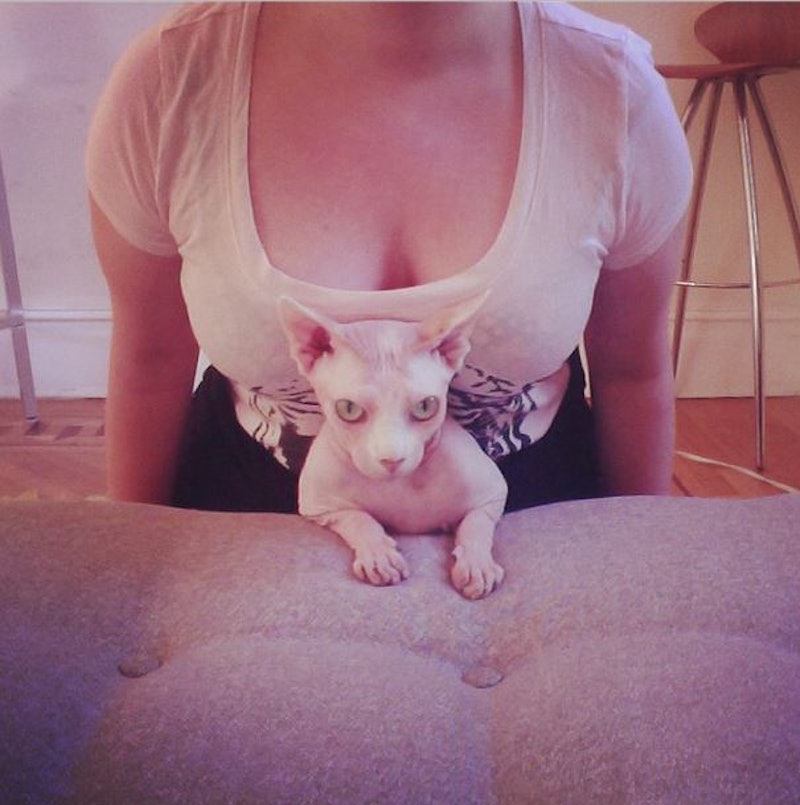 If you're wondering why women are taking and uploading pictures of their boobs on random things, it's a new meme called "#mamming." Think planking, but upright (usually) and done in the name of breast cancer awareness. The concept is simple: Take a picture of your boobs in a public space, preferably propped up on something.

According to the #mamming website, the idea is a "passion project created by two female advertising creatives," one of whom is a breast cancer survivor. Here is how they define it:

#Mamming is the act of laying your (clothed) boobs on a flat surface. Like a counter. Or a bench. Or the body of a person who is #planking.

Why? Because it's supposed to mimic mammography:

#Mamming is a chance for all* of us to show solidarity with the millions of women getting mammograms this Breast Cancer Awareness Month. Because when a woman reaches a certain age, doctors recommend that she get a mammogram to screen for the disease, and the procedure involves laying her boobs on the machine’s flat surface.

I'm not that into this campaign, but I'll post some more of the photos below so you can draw your own conclusions. My complaint isn't as much about the content as it is about the message, which is vague at best. The #mamming photos don't quite articulate what you're meant to do about mammograms—get them, not get them, support them, what?

And the question of whether and when to get mammograms is actually pretty complicated. In the United States, most guidelines say women should get mammograms every one to two years starting at age 40. But for women with genetic or other risk factors, the recommendations might say to start as early as 30. In the UK, mammograms aren't recommended until age 50, and then every three years. In 2009, the U.S. Preventative Services Task Force—a group responsible for evaluating and advising on health screening recommendations—changed its recommendation to say most women shouldn't start getting mammograms until age 50. In light of all this, the idea of just pushing mammograms per se is pretty silly.

The only clear message I hear from #mamming is to share photos of your boobs on the Internet (after drawing attention to them in public), which doesn't seem all that useful to women -- or related to breast cancer prevention.

So, there you go: #Mamming. The whole thing is making me flash back to a weird song my friends and I liked about five years ago, so I'm going to share it with you. It's called "Boob Scotch" (NSFW). Might these women have been the original #mammers?