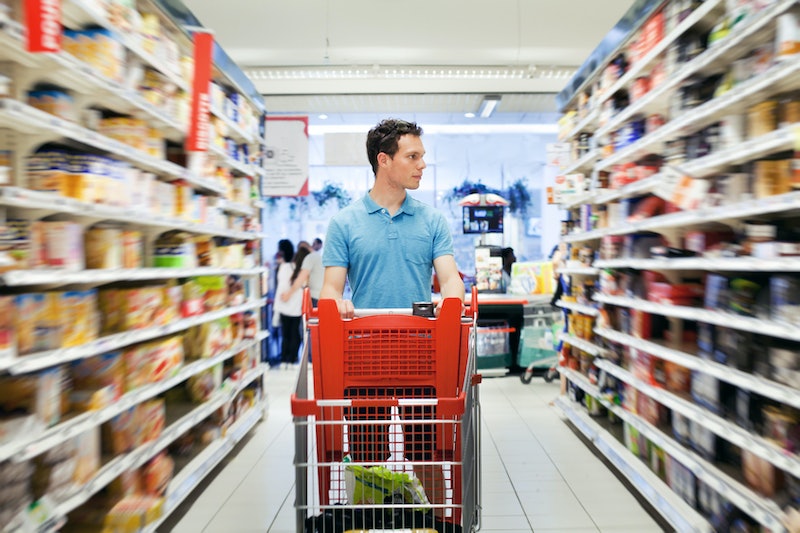 Almost half of men of in the United States are buying most of the groceries and doing most of the cooking for their families, according to Midan Marketing, an agency that has nicknamed this group 'Manfluencers' (and trademarked the term). It's a play on marketing speak for moms who make most household purchasing decisions, deemed 'Momfluencers." In Midan's survey of 900 men, 47 percent did at least half of their family's grocery shopping and meal prep.

Although this survey was relatively small, it mirrors trends that have been seen elsewhere. A 2011 report from ESPN said the number of men who were the primary grocery shoppers in their households had doubled since 1985, from 14 percent to 31 percent. One 2012 survey put this number at 52 percent. A survey from media agency BPN earlier this year put this said 40 percent. So overall there's been a demonstrated upswing in the amount of family grocery shopping men do. Still, Midan account planner Julie Murphy told Quartz's Christopher Mims that the agency "just couldn't believe how high these numbers were for men."

Murphy's agency was also shocked that that male and female shoppers don't buy radically different groceries, which is pretty funny.

“Men are from Mars and women are from Venus, right?," Murphy told Quartz. "We thought [the differences in shopping habits] were going to be earth-shattering, and there would be so many differences between genders. But we found they’re very alike.”

My my my. It turns out maybe there isn't a gendered way to buy cheese and soda. Mims points out that this lack of difference may explain why marketers still think the majority of their audience is moms. Though groceries specially marketed to men have been emerging (see: yogurt for bros), the majority of advertising still portrays mom as the figure in charge of mopping, shopping and making meals.

Thankfully (and predictably), the awe, praise and tailored marketing greeting the "manfluencers" has provoked a good dose of skepticism and snark. Willy Blackmore at Take Part calls it "pander(ing) to the most base idea of masculinity to sell products to them." Melissa McEwan at Shakesville notes:

A woman who is "responsible for at least half of the grocery shopping and meal preparation for their households" is just a woman doing her womanly duty as prescribed by nature. A man who does the same is a "manfluencer." Perfect.

But while 'manfluence' may be silly, more men sharing shopping and cooking duties in their families is an encouraging thing. Let's keep that in mind. And if marketers see this as an opportunity to market to men in a more gendered way, that could be a good thing, too. Maybe once guys start getting patronized in every supermarket aisle, they'll realize how women feel when we see a Dannon commercial.

More like this
An Open Letter To The Person Who Bought Steve Jobs’ Birkenstocks For $218,000
By Ginny Hogan
8 Money Saving Experts To Follow For Accessible Advice
By Maxine Harrison
Is Blake Lively Or Penn Badgley The Richest 'Gossip Girl' Star From The OG Series?
By Hugh McIntyre
Silvio Scaglia Is Wealthier Than 'My Unorthodox Life' Star Julia Haart
By Radhika Menon
Get Even More From Bustle — Sign Up For The Newsletter