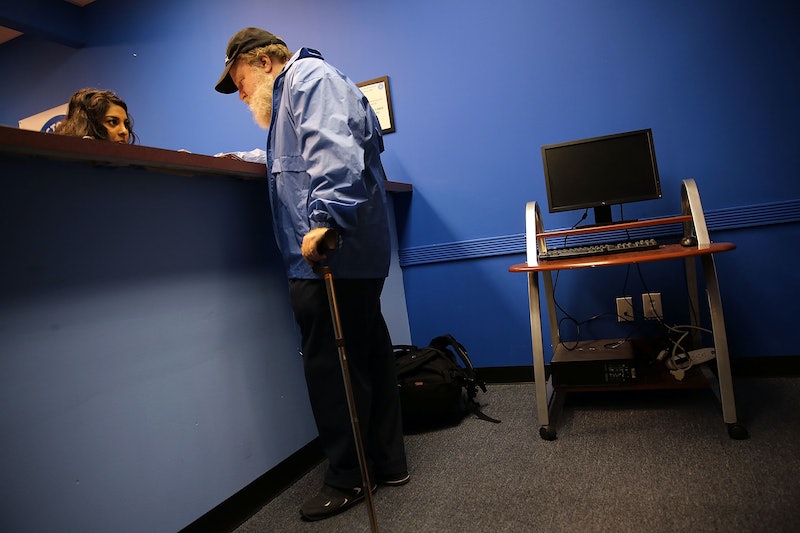 A little but significant tweak to Obamacare was made Thursday: The administration has now made the date for the end of healthcare enrollment and the individual mandate's effective date one and the same. This means that consumers buying health insurance through government exchanges will no longer be fined for being without coverage the first three months of the year — as long as they purchase a policy by March 31.

Wait, say frustrated people swearing at their Heathcare.gov screens everywhere, wasn't this the plan all along? Didn't the enrollment period always end then?

Well, yes, but there was a little fine-related loophole that needed closing.

See, fines kick in when you go three months or longer without being covered by insurance — which, beginning in 2014, everyone has to have. But with insurance, there's sometimes a gap between when you actually sign up for a policy and when the coverage of it begins: Those who signed up toward the end of the enrollment period might, for example, have policies that begin April 1. But because they'd gone uncovered for the first three months of the year, they would have been hit with a fine.

With the un-tweaked policy, this would mean that consumers would have had to purchase a policy by Valentine's Day or so in order to have coverage March 1 and thus avoid fines. Which is not so romantic.

The "weird misalignment" was caught by tax firm Jackson Hewitt and confirmed by the White House on Oct. 9. Part of the problem, said health policy Senior Vice President Brian Haile at Jackson Hewitt, was that different parts of the government that handled different parts of the law's implementation also had different takes on what the deadlines actually were. Health and Human Services, which takes most of the charge for healthcare, was using the March 31 deadline. The Internal Revenue Service, on the other hand, was saying the deadline for enrollment had to be in February. Essentially, both agencies were right, just in different ways.

Anyway, the White House has fixed all that now: Basically, as long as you purchase coverage through the online exchanges by the end of the open enrollment period, which is and always has been March 31, you won't be penalized.

It's not certain how much this has to do with Heathcare.gov's ongoing problems, but maybe with six extra weeks for people to get insurance, traffic will be spread out a little.

Congressional hearings about the website glitches also took place yesterday, mostly to find out exactly why failed tests still apparently meant a green-light for its launch and why, exactly, Healthcare.gov still a bit crappy to use. While there was a lot of partisan bickering (always, forever), it wasn't just Republicans that were upset.

"You keep speaking about unexpected volumes," said Rep. Anna Eshoo (D-Calif.), who oversees Silicon Valley in her district. "I think that's really kind of a lame excuse. Amazon and eBay don't crash the week before Christmas."

Good point, Eshoo. The Republicans, meanwhile, went on about how the whole program was doomed because the Healthcare.gov sucks, which is kind of like assuming an ugly cover means an entire novel will be a waste of time.