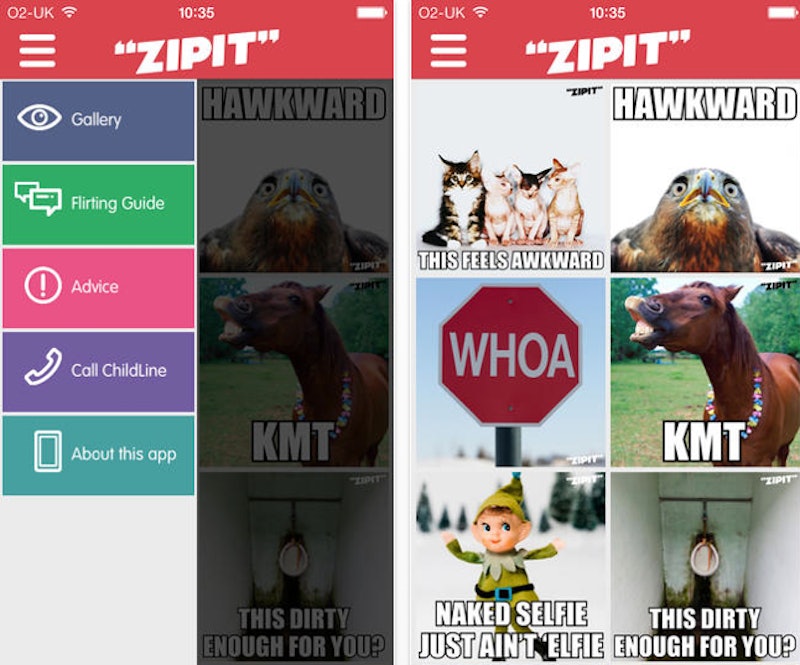 There’s a new sexting app that helps you avoid sexting! Yes, folks, it’s true. You can now halt the epidemic of sexting and save yourself with nothing more than a handy supply of memes. The app, called ‘Zipit,’ aims to help teens avoid feeling that they have to sext by giving them some potential responses that are humorous enough they won’t get teased later for their refusal.

Now, this is a noble idea. Nobody likes the idea of teens being pressured to share revealing photos of themselves. Certainly I don’t. But still, isn’t this kind of like saying “Peer pressure trouble? There’s an app for that!” In the real world, it probably won’t work quite so well – even if the “Here’s a picture of my junk” laid over a photo of garbage really did make make laugh.

The point is that teenagers have never been interested in anything resembling a canned response, whether they’re sending or receiving it. Teenagers need to make their own rules, to remake the world, because…well because they’re teenagers. It’s just what you do. The idea of using an app to help avoid peer pressure – especially one that comes with a “flirting guide” – sounds like a great gift to an adult’s ears but to teens, it’s likely to look kind of lame.

I’m just guessing, though. I haven’t been a teen in a frighteningly long time. In fact I’m kind of worried that the simple fact I find some of these memes funny might mean I have passed, definitely, into adult land. So thanks for that, Zipit. And thanks for your name that vaguely reminds me of all that “keep ‘em closed” advice that girls get. Don't know if that was your intention, but still.

Ultimately, teens who don’t want to sext are going to have to figure out how to manage situations where sexting comes up, in the same way that teens have to navigate the dangerous waters of drugs, alcohol, bullying, family drama, and actual, real sex. If they want to use an app to help them, great for them, but it’s worth mentioning that in the end it won’t be an app that saves them (assuming of course, they want to be saved); it will be learning to speak up for themselves and manage unfamiliar social situations and claim their own agency, which really is the process of being a teen.