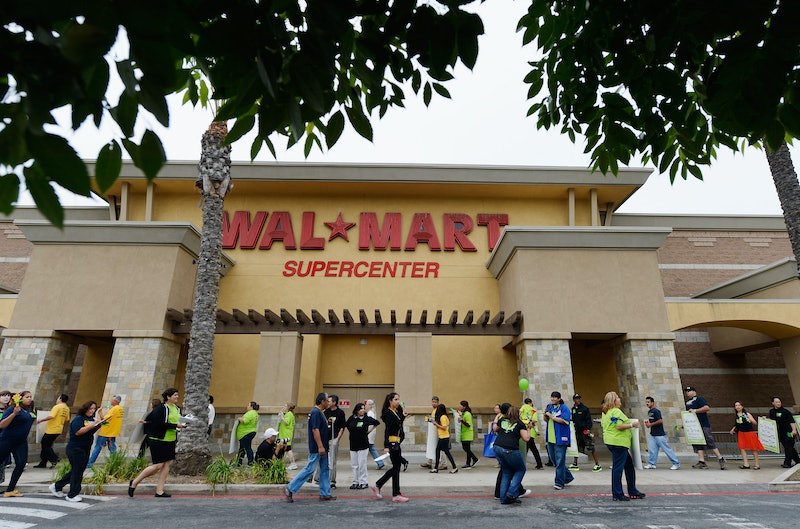 Walmart has offered to hire back Kristopher Oswald, the Michigan employee Walmart famously fired for helping a woman who was being assaulted by her ex-boyfriend on store premises. Yup, you read that right; preventing domestic abuse is a fireable offense at Walmart, which places strict limits how much genuine human decency they’ll allow on company grounds at any given time. But Oswald rejected their “offer,” saying the company has been “unwilling to compromise”, and unable to offer him assurance that he wouldn’t face further disciplinary action were he to return to his job. Good job there, Walmart.

On Oct. 13, Oswald working the night shift at the Livingston County’s Hartland Township store. During his break, he went to his car to eat lunch, but soon noticed a woman and a man having some sort of scuffle in the parking lot.

“I observed a person on a vehicle, kinda like ‘Die Hard’ mode, holding onto the hood,” Oswald said. “But then I saw who the driver was: It was this tiny, little blonde girl who got out and tried to force this person off of her vehicle. And she’s screaming, and he jumped off the car, grabbed her by the arms … and forced her against the car.”

Oswald got out of his car, approached the two and asked the woman if she was okay. This prompted the woman’s attacker to punch Oswald in the head and scream that he was going to kill him. Oswald fought back, and eventually got on top of the man, but the attacker apparently had two henchmen waiting in the shadows, who jumped Oswald from behind. The Livingston County Sheriff deputies arrived next, broke up the fight, and arrested the attacker, who was charged with drunk driving, malicious destruction of property and domestic violence.

The Sheriff’s office praised Oswald for coming to the woman’s assistance; Walmart responded by firing him for “a violation of company policy.” The story soon went viral, and everyone started hating Walmart just a little bit more than they already do, at which point the company backtracked and offered him his job back. But Oswald doesn’t want it.

"They could not guarantee that nothing would happen from management if I did take my job," Oswald told Livingston Daily. "It's a day-to-day struggle. I feel like if I say the wrong thing, I'm going to have a company coming after me."

Meanwhile, the attacker's court date is this Tuesday but, depressingly, he's currently free on a $1,000 bond. Oswald says that, if he had to do it all over, he wouldn't do anything differently.

"I will always do the right thing," he said.