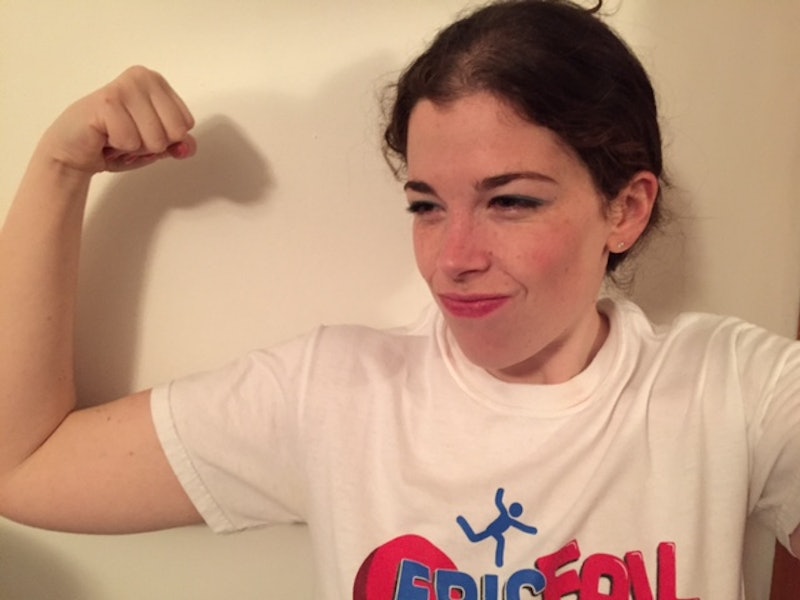 Wearing makeup can come up with a lot of baggage, especially wearing makeup to the gym. Ladies endure all kinds of criticism from the long list of things you should never say to women wearing makeup, from the tired, “Loving makeup means you're insecure,” accusation to, “She’d look better without all that stuff on her face!”

We have a habit of imposing ruthless standards to women who like to apply a little rouge before leaving the house. It can be hard to determine what amount of makeup is “acceptable” to wear to places that fall into that gray area between Doll Yourself Up! and Don't Bother — like the DMV, the dentist, or the grocery store — but the one location where wearing makeup inspires the most polarizing opinions is at the gym. We have some very strong perceptions about ladies wearing lipstick for their lunges.

Full disclosure: I’m one of the haters serving side-eye and shade from the Stairmaster. The glamour girl — with her perfect hairstyle and inability to sweat in a way that isn't effortlessly sexy — is one of the many types of people you see at the gym. At my fitness center, I often run into the same woman using the hip abductor machine, and her face is always covered in makeup, complete with fake eyelashes and blue eyeshadow. Even though the only thing I know about her is that she exercises with makeup on, my assessment of her character as a human being is less than charitable. Based on her makeup alone, I’ve accused her of wandering around the gym solely to attract men and questioned the quality of her workout, because who seriously lifts weights while wearing fake eyelashes? All these hostile assumptions are based on the fact that she's a woman with makeup on at the gym.

As women, sometimes that’s the trap we fall into when it comes to beauty and fashion, isn’t it? We assume there’s only one right way — which conveniently is usually our way. We apply our own notions about what's "proper" onto women we don’t even know, and the offending characteristics are usually so small. In my case at the gym, the issues were contained entirely on one fellow gym-goer’s eyelids. As someone who never wears makeup while exercising, I wanted to see what it was like to go to the gym wearing the very blue eyeshadow that inspired such contempt in me. For seven days, I wanted to see what it felt like to be that woman, to note how people react to me, and to determine whether wearing makeup has any impact on the quality of my workout.

I don't ever walk into the gym with the same sense of purpose I would have walking into the book store or a bakery, but on Day 1 of the Glamour Gym Girl experiment, I'm really dragging my feet. Even though I know I'm only wearing blue eyeshadow for this experiment, there's a good chance people at the gym will see me and think this is how I show up to the gym all the time. I'm surprised by how I care so much about that — that people could actually confuse me for an authentic Glamour Gym Girl.

The cool teenage girl at the front desk scanning my membership card has this look on her face like she's filing our interaction away to discuss with her coworkers later. I imagine the conversation will go something like, "Hey, did you see the girl with the blue eyeshadow?" I use a treadmill for 30 minutes, and even though a few people passed by in front of me, none of them openly gawked or questioned me. Beyond my own insecurities, the biggest obstacle I endured was mastering the subtle art of dabbing my face with a towel so that nothing smeared.

I'm in spin class, and today I definitely received the hairy eyeball from a middle-aged woman, but I think that has less to do with my eyeshadow and more to do with the fact I may have stolen her usual bike. Even though I've been to a few spin classes before, the women seem more accepting of me, even with this blue eyeshadow. The spin ladies normally say their pleasant hellos when I'm makeup-free and pretty much ignore me after that, but today I'm included in their conversations, and they asked me more questions about myself than they ever have before. Of all the thoughts you have during indoor cycling class, wondering if people like you more with blue eyeshadow is definitely among the most disturbing.

The many mirrors at the gym always attract an onlooker or two. Sometimes the staring is on behalf of innocent people trying to commit your stretches to memory so they can try them later in the privacy of their own home, and the rest of the time it's men trying to sneak a peek at your reflection. I'm stretching and doing some body weight exercises in an area of the gym where a lot of dudes lift weights, and I'm getting some attention. Some of the men are looking with interest, and I'm wondering if they find me more attractive because they assume a girl who wears makeup to the gym must really "take care of herself," as guys sometimes say. The other hardcore lifters don't seem impressed, and they treat me like a tourist taking up space when I should be off somewhere asking a mirror if I'm the fairest of them all.

Today I'm at a boot camp class I've been attending fairly regularly for about a month. I know several of the other people who come to the class, and most of them are used to seeing me in sweatpants, hair tied, chillin' with no makeup on. When I arrived at class, I was treated like I was wearing a taffeta gown. One woman commented, "You look beautiful! Are you going somewhere special after this?" I'm embarrassed, and I'm not sure how to respond. I feel like I need a good excuse for looking the way I do, even though the response was surprisingly positive.

Today I decided to visit the women's circuit at my gym. This area is only used by women, so I was curious to see how fellow ladies at the gym would respond to seeing me in my bright eyeshadow. I went in expecting that the women closest in age to me would be the most skeptical, rolling their eyes and quietly judging me for looking the way I looked. Surprisingly, the only response I received was from an elderly woman. While she was using the machine next to mine, she turned to me and asked, "Don't you get sweaty under all that?" After doing this for a few days now, I actually felt irritated. Even if I was sweaty, what business was it of hers?

I'm going to a weekly kettlebell class with my mom tonight. Of everyone I've come across, she's probably the most embarrassed to be seen near me. I've explained more than once that I'm wearing the eyeshadow for an article I'm researching, but she still thinks I'm crazy. When I say hello to the instructor of our class, I notice her eyes travel up to scrutinize what's on my eyelids, but she doesn't say anything. Even though I know my mom thinks I look crazy, I think back to how nervous I was about being seen on Day 1, and it seems so silly that I was hyper-concerned about the assumptions people might make about me as Glamour Gym Girl.

Maybe I'm feeling extra confident because I know it's Day 7, but I walk into the gym with my head held high. Yes, I have blue eyeshadow on along with some heavy-handed mascara and blush, but I'm here to exercise the same as anyone else. If anyone gave my face a second glance or whispered to their gym buddy behind my back, I didn't notice, because I realized it wasn't all that important.

Whenever I've just finished exercising — with baby hairs sticking up everywhere, red cheeks, and sweat making my forehead shiny — I feel the most beautiful. I may not look as conventionally "good" as I would when more polished, but it's a beauty that comes from within. It comes from knowing I did something good for myself. Why should I assume women wearing makeup at the gym don't look forward to the same feeling? Why should I assume my method of feeling beautiful at the gym is the only one that exists? I may not be rocking that blue eyeshadow again anytime soon, but I will be making an effort to more open-minded running alongside a fellow Glamour Girl.

More like this
The 13 Best Cream Makeup Palettes, According To Experts
By Audrey Noble
Pamela Anderson's Most Iconic Makeup & Hairstyle Moments
By Olivia Rose Rushing
23 Romantic Makeup Ideas For Valentine's Day 2023
By Olivia Rose Rushing
This Week’s New Makeup Releases & More Beauty Headlines
By Audrey Noble and Erin Stovall
Get Even More From Bustle — Sign Up For The Newsletter
From hair trends to relationship advice, our daily newsletter has everything you need to sound like a person who’s on TikTok, even if you aren’t.