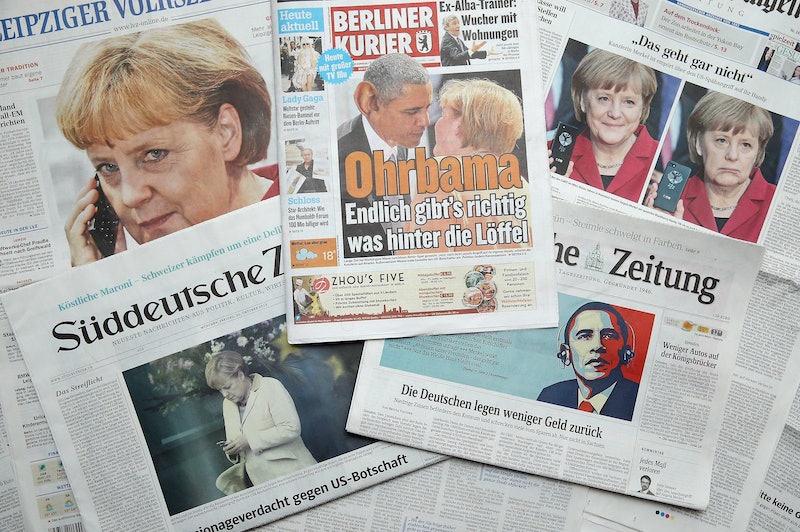 Following a few more awkward Snowden leaks earlier this week, not only are Germany and France furious with the United States government, American citizens are getting riled up again too. On Saturday, thousands marched to the Capitol to protest against the National Security Agency's mass surveillance in a rally organized by a coalition of over 100 public advocacy groups, including the ACLU and Occupy Wall Street-NYC. At the same time, foreign leaders are also calling for an end to the U.S.'s extreme snooping, putting the pressure on President Obama to fix relations, and fast.

The march, put together by a partnership of groups calling themselves 'Stop Watching Us', is hoping to deliver a petition to Congress by Saturday demanding a stop to the NSA's mass surveillance techniques. Meanwhile, German intelligence officials landed in Washington to address reports that the NSA had been spying on German Chancellor Angela Merkel's cell phone — even after Obama simultaneously denied the allegations and promised to stop.

“The president assured the chancellor that the United States is not monitoring and will not monitor the communications of the chancellor,” White House press secretary Jay Carney said to reporters earlier this week.

According to US state department spokesperson Jen Psaki, the leaks have "posed a moment of tension with some of our allies," but they "are having discussions with those allies, those will continue, as is evidenced by the German delegation that will be coming here in the coming weeks." She added, however, that President Obama has now called for a review of the nation's intelligence gathering, saying:"We wanted to ensure we're collecting information because we need it and not just because we can."

The news of Merkel's surveillance follows revelations earlier this week that American intelligence had also collected several million French telephone records over a month-long period, and before that, it was leaked that a similar situation had gone down in Brazil. When she found out found out that the U.S. had been snooping on its citizens, Brazilian President Dilma Rousseff was so insulted that she publicly slammed the U.S. and cancelled a dinner at the White House. And the rifts with Brazil are unlikely to disappear anytime soon — according to Michael Leiter, former head of the National Counterterrorism Center, “It’s much more troublesome for rapidly emerging powers like Brazil. They’re critical partners and we don’t have the same long-term, deep national security ties and I think this really does make it hard for us.”

”They told us it was in the past and now there’s a will to organize things differently,” Hollande said, but added: "Protection of virtual life is not just the protection of leaders, who have cellphones just like everyone else. It's the protection of all citizens. The protection of personal information should be guaranteed in Europe and demanded of the intelligence services."

He also pointed out that surveillance can have an impact on markets and mergers, saying, "On innovation and research, there's also surveillance. That's why the major French enterprises, include tech companies, are in a program to give them protection."

But others are pointing the finger at journalists and the ever-controversial ex-government contractor, Edward Snowden.

“I think it’s wrong that that newspaper reporters have all these documents, the 50,000 — whatever they have and are selling them and giving them out as if these — you know it just doesn’t make sense,” said National Security Agency director Gen. Keith Alexander. “We ought to come up with a way of stopping it. I don’t know how to do that. That’s more of the courts and the policymakers but, from my perspective, it’s wrong to allow this to go on.”

And Britain's Prime Minister David Cameron directly blamed the whistle-blower, saying, "What Snowden is doing, and to an extent what the newspapers are doing in helping him doing what he's doing, is frankly signaling to people who mean to do us harm how to evade and avoid intelligence and surveillance."

On the other hand, there are those that see the leaks as evidence that there is something fundamentally messed up in the way the NSA is monitored. According to an op-ed by Congressman Alan Grayson (D-FL 9th District):

Despite being a member of Congress possessing security clearance, I've learned far more about government spying on me and my fellow citizens from reading media reports than I have from "intelligence" briefings...In fact, one long-serving conservative Republican told me that he doesn't attend such briefings anymore, because, "they always lie"...Edward Snowden's revelations demonstrate that the members of Congress, who are asked to authorize these programs, are not privy to the same information provided to junior analysts at the NSA, and even private contractors who sell services to foreign governments.

So, we get it. The NSA watches us (and everyone else, it seems), but who watches the watcher? With the shutdown now all but forgotten, attention can again be focused on whether or not the government has crossed an Orwellian line. Next week, the House will have a hearing on the issue, and, separately, the Privacy and Civil Liberties Oversight Board is also set to hold an all-day public hearing to go over possible reforms.