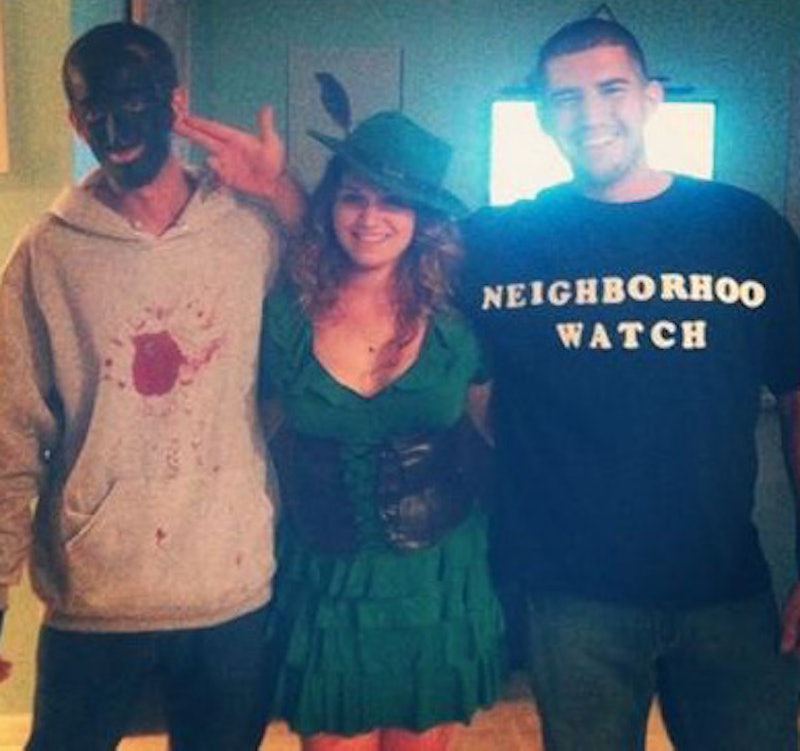 Another Halloween, another spat of what were you thinking how could you what the?! costumes. This year, we've already had Julianne Hough donning blackface and "Anna Rexia" — and this weekend, two Florida teens dressed up as Trayvon Martin and George Zimmerman. "Zimmerman" wore a T-shirt with "Neighborhood Watch" stenciled on it, and "Trayvon" wore blackface, a blood-splattered hoodie, and a really big smile. "Happy Halloween from Zimmerman & Trayvon," read the caption. The image, which the teens shared over both Facebook and Twitter — because their common sense wasn't already lacking here — prompted a furious backlash from, well, everybody with a brain and/or soul. The three were "named and shamed," and the Facebook image was pulled from the site.

Of course, last February, 17-year-old Martin was shot and killed in Sanford, Florida. Zimmerman told police that he'd shot the teenager in self-defense, and a jury found him not guilty of murder and manslaughter. The decision sparked a series of nationwide riots, and outrage from thousands who believed Zimmerman had racially profiled and/or picked a fight with Martin prior to the shooting.

The Florida boys, 22-year-old Greg Cimeno and William Filene, 25, haven't apologized. Filene wrote in a Facebook comment: "By far the most politically incorrect and funniest costume of the year... Fuck yeah!"

Good old Filene has his own page of the Florida Department of Corrections website, according to The Smoking gun, and is currently on probation for stealing a car. Caitlin Cimeno (Greg's sister, who stands between them in the photo and was the one to post it to her Facebook page) is apparently also a fantastic human. The Smoking Gun confirms that she is, indeed, racist:

In Facebook posts last year, Cimeno referred to elderly women who wore tight pants and tube tops as “tacos,” and, when requesting that a friend contact her, she wrote, “Text me niggs.” In August, Cimeno also posted a photo of an African American girl wearing a t-shirt reading “Black Girls Rock.” In her accompanying caption, Cimeno wrote, “First of all, sorry Hun but mommy lied to you & secondly if I was wearing a shirt that said something like the truth 'white girls rock' I would be stared at and called a racist cracker.”

They weren't the only ones who decided Halloween was an excellent opportunity to parody the teenager's death.

Back in July, BuzzFeed reported that teenagers had jumped on board the disturbing "Trayvoning" trend, which saw them "playing dead" on the ground, holding packets of Skittles — Martin had gone to buy Skittles on the night he died — and then uploading the photograph to Facebook, Twitter, and Instagram.

Pull it together, humanity.