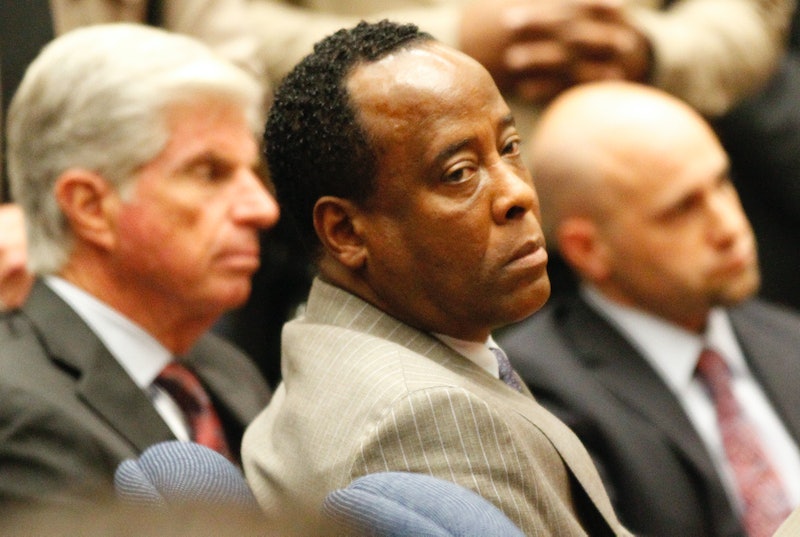 A minute of midnight Monday, pop star icon Michael Jackson's former doctor Conrad Murray walked out of a downtown Los Angeles jail, a free man after two years behind bars. Murray, who'd been charged with involuntary manslaughter and sentenced to the statutory maximum of four years, only ended up having to serve two, thanks to a change in the state's laws. The ex-cardiologist, who was also Michael Jackson's personal physician, was convicted in 2011 of causing the musician's death by giving him an overdose of the powerful anesthetic Propofol as a sleeping aid two years before. Due to a U.S. Supreme Court decision hoping to help overcrowding by shifting non-violent offenders to local jails, the former doctor was allowed to serve his sentence at Los Angeles jail rather than a state prison.

As could be expected, a crowd of Michael Jackson fans congregated outside the Los Angeles County Jail to protest the 60-year-old's release.

So what now? According to Wass, Murray will continue to challenge his conviction on the grounds of insufficient evidence in the state Court of Appeal (although an appeals court has already indicated uncertainty over whether it should hear the case). His California medical license has been suspended, pending his appeal, and his Texas license has been revoked entirely. But his lawyers pushing for him to practice again — whatever that may mean.

“Dr. Murray has an unquenchable desire to help people, and no matter where it is, he will return to his given profession of healing,” his Texas lawyer Charles Peckham said last week. “The truth is that a man like Dr. Murray who’s dedicated his life to helping people will find a place to do it. If it’s in Texas or the U.S. or we don’t know where, you can be sure he will find a place to help people.”

In other words: Be on the look-out, countries-with-lax-medical-laws.

But others are suggesting that Murray might use the public attention to do what many controversial figures have done before: pen a memoir.

“He is offering it to publishers and expects seven figures. People have told him no one wants to read it, but he is using Michael to try and make money,” the doctor's former bodyguard Jeff Adams told The New York Daily News recently.

“Murray thinks he can make it as a singer in the future,”Adams said. "He is working on rebuilding his career in the medical field and forging a career in entertainment."

Here's what the Twittersphere has to say about it: