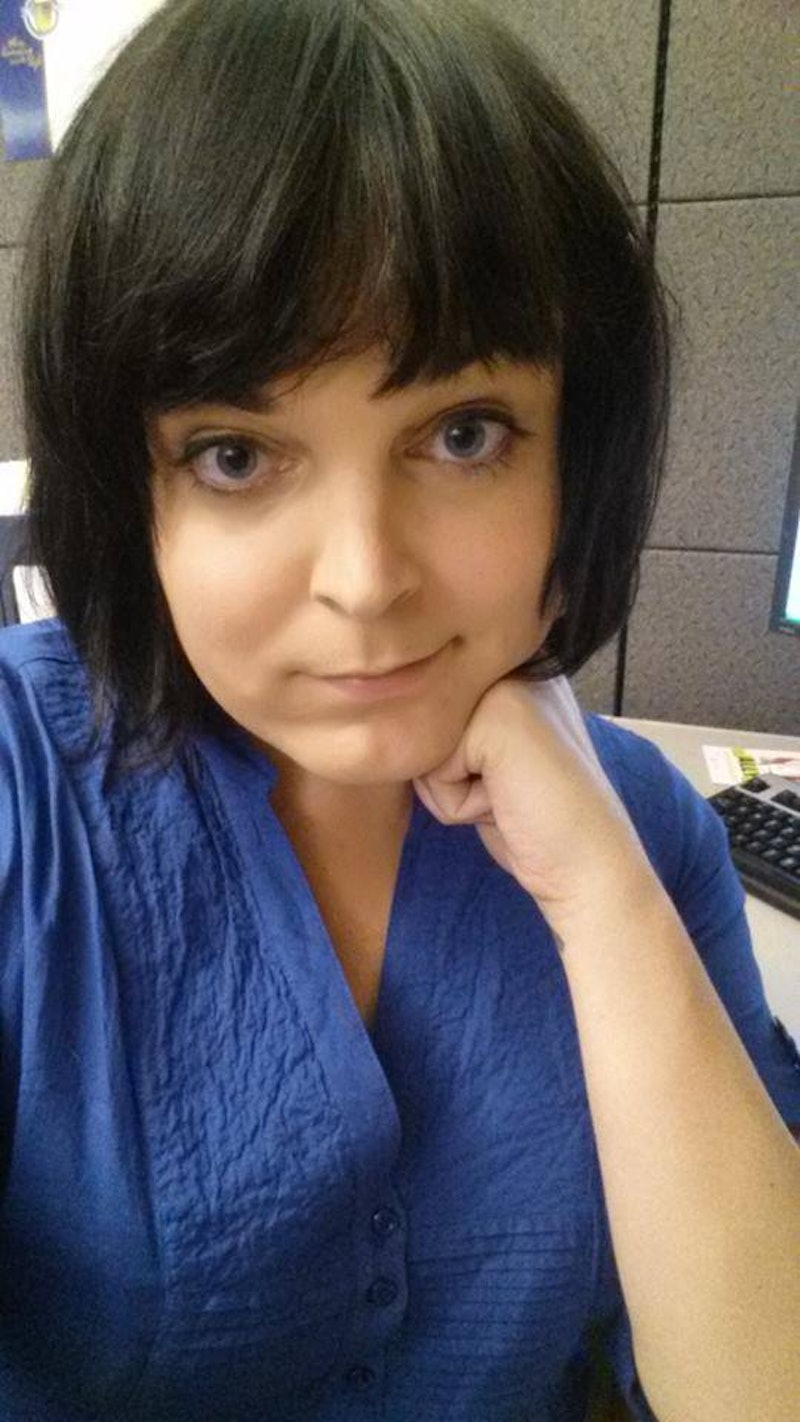 To the edge and back

I’m transgender, meaning the gender that was assigned to me at birth doesn’t match the gender I identify with. For most of my life, I couldn’t articulate this feeling in a coherent way.

I started struggling when puberty hit, around age 12. I watched as my body turned what felt to me grotesquely masculine, and my mind began to feel as though it was in a fog of testosterone. My brain was like a Camry someone had tried to fuel with diesel — it wasn’t meant to run on testosterone. I wished I could be like the other girls in my class. Something just seemed right about who they were, how they were.

I sank into a depression that lasted for years. I didn’t understand why. I tried therapy, anti-depressants, anti-convulsants, and anti-anxiety medications. They didn’t help. I finally gave up trying to fix it. I thought there was nothing I could do.

At age 26, after years of repressing these feelings, the dissonance between my mind, body and life itself became too much to handle. Every morning I woke up feeling more shame and anxiety than ever before. I took up smoking, a habit I’d kicked nearly two years prior. I couldn’t sleep without drinking, and I often drank until I couldn’t walk. Still, the feelings persisted. I considered suicide.

Then in late May of 2012, I came out to my girlfriend of 5 years, pouring my heart out, doing the best I could to explain the toll that ignoring this has taken on me. It’s a hard thing to put into words.

By that October, after months of working with a therapist specializing in gender-related issues, I had begun hormone replacement therapy. Simple enough. I took medication to reduce the testosterone in my system, the very hormone that had nearly destroyed me, and I gave myself a weekly injection of estradiol, one of the more common forms of estrogen found in pubescent and post-pubescent women.

A few months later, I’d begun to experience the physical and mental impact of the hormones, and with it a new sense of clarity, peace and happiness. The chronic aches in my joints and pains in my stomach that had been a staple of my life since puberty dissipated. My mind and body began repairing themselves. It’s as though my brain was meant to run on estrogen my whole life.

Why am I like this? Honestly, I don’t know. There are a number of theories rooted in medicine, one of the most prominent being a 2006 study, published in the journal Psychoneuroendocrinology, by Schneider, Pickel and Stalla.

The study suggests that the amount of testosterone a fetus is exposed to in utero is directly linked to one’s likelihood of being transgender. In other words, prior to my birth, I may have been exposed to too much or too little testosterone while in my mother’s womb, causing my brain to develop differently than that of the average baby boy.

No matter the cause, this is, and has always been, a part of me. If I could have, I would have chosen to be born congruent, mind and body. I didn’t choose this, but I’m making the best of what I have.

I know who I am

I have to ask: What constitutes a “real woman?”

How am I not one? Is it because of my chromosomes? I don’t think that’s fair, as neither you nor I know what my chromosomes even are. Someone who makes this argument assume they’re XY, but I don’t even know that for certain, as I’ve never had a karyotype test. It’s probably a safe bet that my detractor hasn’t had a karyotype test, either. Even if I do have a Y chromosome, that doesn’t mean anything. There are a number of women with Androgen Insensitivity Syndrome, sometimes giving them an XY set of chromosomes, which, typically, would be associated with men. Are they not women? In fact, there was even a recent case of a woman with XY chromosomes who gave birth to a daughter with -- you guessed it -- XY chromosomes.

Additionally, a September 16, 2013 article in the New York Times (“DNA Double Take”) examines recent studies on the DNA of women. “In 2012, Canadian scientists performed autopsies on the brains of 59 women. They found neurons with Y chromosomes in 63 percent of them.” 63 percent!? Wow. A separate study, conducted at the Dana-Farber Cancer Institute in Boston, discovered that 56 percent of the women they investigated had a Y chromosome, based on a sample of their breast tissue. This goes to show that being a woman is about more than whether you have two X chromosomes.

Is the reason that some disqualify me from womanhood related to the fact that I can’t birth a child and don’t have a uterus? If so, do they also reject the womanhood of infertile women or those who have had a hysterectomy? It’s true that I wasn’t born with a uterus, but neither was Jaclyn Schultz, Miss Michigan 2013. As a result of Mayer-Rokitansky-Küster-Hauser syndrome (MRKH), she was born perfectly healthy, with the exception of her missing uterus (which also resulted in an inability to menstruate). 75,000 women in the United States have MRKH. Are they “really men?”

Is it the fact that I wasn’t “socialized as a woman” that excludes me from womanhood? Is it that I was “socialized as a man”? Well, so were these girls in Afghanistan. They were “raised as boys” until they were well into their teenage years. Are they not women?

Let’s move on to the most obvious objection to my womanhood: It would take sexual reassignment surgery (SRS), also known as vaginoplasty, for me to ever have a vagina. So that “makes me a man”? Tell that to women born with vaginal agenesis, a condition present in 1 out of every 5,000 female infants, where a child is born without a fully-formed vagina. This condition may require surgical intervention (i.e. vaginoplasty) in order to create a vagina. Does this negate their femaleness as well?

None of these factors (chromosomes, reproductive organs, socialization, genitals) cancel out the fact that the girls and women I mentioned above are, in fact, girls and women. I sincerely doubt that most people would so much as question the womanhood of the women I described. After all, it’s not their fault that they were born with anomalies. How am I any different? I didn’t choose to be transgender.

I’m different, and I’m okay with that

I don’t want “special treatment,” I just want to be respected as a human being, as deserving of dignity as anyone else. I want to be able to exist in the world without the core of my identity, something that I grappled with for more than a quarter century, being dismissed by someone who couldn’t possibly understand what it’s like. I want to be able to go to work without worrying about being fired for who I am. I want to be able to use the restroom without fear of being beaten or accused of having malicious intentions. Like everyone else, I want the world to see me for me.

Is that really so much to ask, to be treated like everyone else, to have the same rights and protections as everyone else? From a legal and public accommodations viewpoint, that's really all any of us are asking for.

Being transgender is a medical condition. Like so many other conditions, if left untreated, you're bound to wind up the bearer of a host of related symptoms. Depression, anxiety, suicidal thoughts and actions are what you often get when you try to suppress your dysphoria. Without treatment, which, for me, came in the form of hormone replacement therapy, I might be dead.

More like this
It's A Pleasure #53: Help! My Boyfriend Won't Tell Me Why He Stopped Going Down On Me
By Sophia Benoit
Megan Rapinoe's Relaxation Hack Is Super Dreamy
By Carolyn Steber
How To Politely Reject Someone Who Keeps Asking You Out
By Laken Howard and Lexi Inks
Bustle Daily Newsletter: October 4, 2022
By Hayley Schueneman
Get Even More From Bustle — Sign Up For The Newsletter