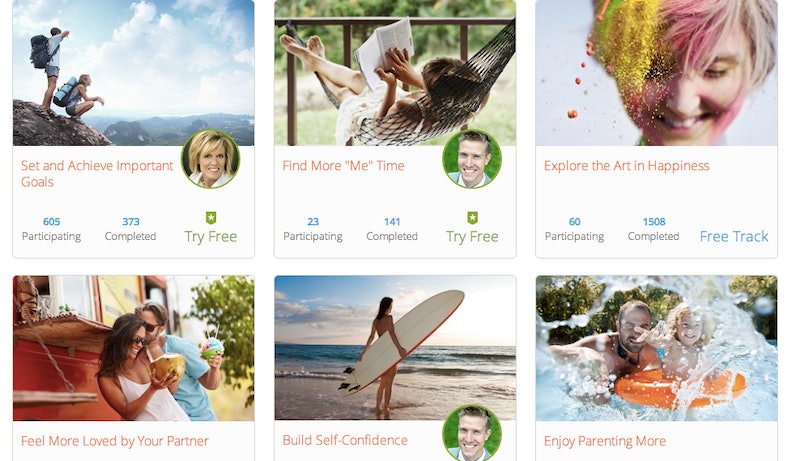 Are humans hard-wired to focus on the negative? Evolutionarily, yes, according to a new book by neuropsychologist Rick Hanson. We've evolved to meet potential threats with a greater emotional response than we'll get from, say, the smell of flowers. For every negative experience — an insult, a breakup, a brush-off — it's estimated that we'll feel five times more strongly than we do per each positive experience. Luckily, um, there's an app for that! Meet Happify, a New York City start-up application that encourages you to practice daily "exercises" to maximize your brain's susceptibility to bright and shiny feelings.

First, the science: According to Hanson, we've developed to focus on negative emotions, essentially because our ancestors wouldn't have made it if their emotional energy was spent cheerily holding hands and feeling the wind whipping through their hair. They needed to learn to recognize threats, and to be constantly prepared for them. Our brains aren't hard-wired to pay much attention to happiness, so trying to "think positive" isn't necessarily the answer: a key finding of the last two decades' worth of "happiness research" is that trying to be happy can actually blind you to daily life, making you un happier. So what's a happiness-obsessed culture to do?

Hanson believes that rewiring your brain to place emphasis on "yay!" experiences is the way to go. This can be done, he says, by taking an extra half-minute or so to take a deep breath, and let a positive experience sink in. So, not trying to "look on the bright side," as we're often told to do. From Hanson's interview with The Atlantic:

Happiness is having a moment. Fifty years ago, it didn't even count as a research subject, and now entire labs of researchers and economists spend their time trying to measure and deconstruct the mechanisms of what it means to be "happy." Even the UN has gotten involved, mandating that countries have to submit annual data for their World Happiness Report. (This year, America ranked 17th of 156 countries, which ain't half bad.)

In the States, happiness is a bigger theme than almost anywhere else in the world, largely due to our national origins and the enduring theme of the American Dream. In TIME magazine's cover story, "The Happiness Of Pursuit," writer Jeffrey Kluger wrote:

It's Americans who have codified the idea, written it into the Declaration of Independence and made it a central mandate of the national character. American happiness would never be about savor-the-moment contentment. That way lay the reflective café culture of the Old World--fine for Europe, not for Jamestown. Our happiness would be bred, instead, of an almost adolescent restlessness, an itch to do the Next Big Thing.

New app Happify has zoned in on the gap in the market for DIY happiness (app-iness? God, we're witty.) Last week, Happify launched with nearly $4 million of private funding and 100,000 member sign-ups in beta mode alone. The app forces you to practice five mental-health exercises: savoring; thanking; aspiring; giving; and emphasizing. It's coming soon to the App Store, and at present exists as a very brightly-designed website. So Bustle tried it out.

First, Happify asked us a series of questions, to "recommend a track."

After you hand over your personal information, you then pick a certain happiness goal, or "track," or Happify recommends one for you. There are dozens to choose from, which left us slightly intimidated.

After you choose a goal, your "Track Activity Board" appears. Two activities are immediately up for grabs, and as you use them more often, others "unlock."

Let's try out some of that gratitude...

If you feel lost and confused by the whole thing, there's a little tab called "The Science," which is set up to answer any questions you might have.

And here's our "Happify Profile." Since we just got started, we've achieved absolutely zil Happify points, but are nonetheless pleased to be called a "pioneer."

As much as happiness is an enduring American theme, not being happy is as pertinent a motif in our books and literature. After all, we're taught that fiction has three themes: man against man, man against nature, and man against himself. When there are no battles to be won, no structures left to build — a uselessness often referenced when talking about today's generation — man can turn against himself. (FYI: we're using "man" to refer to "humans" here, obviously.)

On the one hand, due to modernity, many people report that moment to moment, they’re having fairly positive experiences, they’re not being chased by lions, they’re not in a war zone, they’re not in agonizing pain, they have decent medical care. And yet on the other hand, many people today would report that they have a fundamental sense of feeling stressed and pressured and disconnected from other people, longing for closeness that they don’t have, frustrated, driven, etc. Why is that? I think one reason is that we’re simply wasting the positive experiences that we’re having, in part due to modernity, because we’re not taking into account that design bug in the Stone Age brain that it doesn’t learn very well.

An app is clearly the solution here.