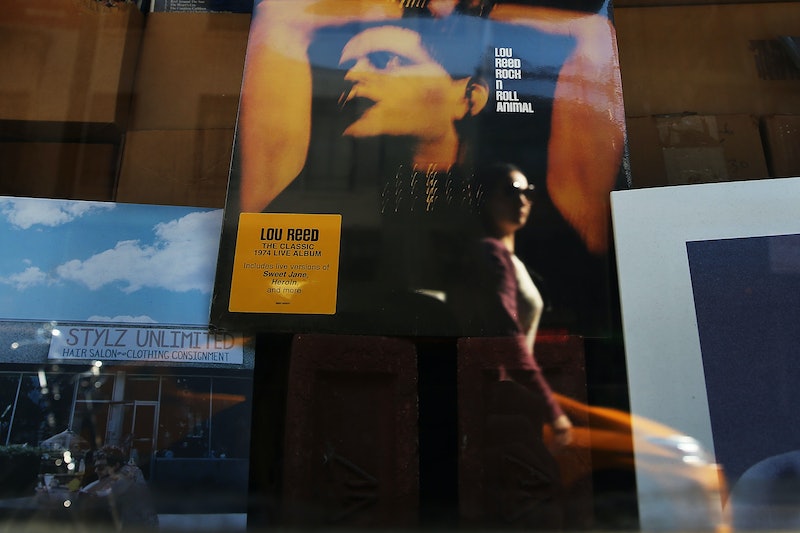 I tend to inwardly groan when people act dejected over the death of a celebrity they haven't thought about in years. After all, what right do you have to mourn someone when you stopped following their life decades ago? But when I heard that Lou Reed died at 71 on Sunday, I finally went there. It didn't matter to me that I haven't been following Reed's contemporary career. For me — and most amazingly, for multiple generations — a key figure of our adolescence is officially gone.

Growing up in the San Francisco Bay Area, it was impossible to get through childhood without hearing Lou Reed's "Walk on the Wildside" regularly playing on the radio. Along with "Sitting on the Dock of the Bay," and "For What It's Worth," the song's gender-bending overtones made it perhaps the third honorary San Francisco anthem.

That "Wildside" was likely about a transgender woman was no secret to me — I'm sure my music nerd of a dad alerted me to that fact early on. Of course, Reed was famously sexually androgynous in his appearance, and blurred gender lines in a way that puts even the best-intentioned Robin Thicke parody to shame. He flaunted his ability to get people across the gender spectrum to have sex with him, and that was part of what made him an actual rockstar.

But as a kid, I didn't know all that yet. I just remember driving across the Bay Bridge with my dad and feeling it in my still-spongey bones: this is a really good song.

It wasn't until I was 14 that I discovered The Velvet Underground. I remember listing to "I'm Set Free" in my room late one night, contemplating what it means to be in control of your own life, your own body. The lyrics always spooked me, and provided an image I'm pretty sure I had some nightmares about:

Shortly thereafter, my best friend/high school music-shaman Charles made me mixed CD after mixed CD featuring The Velvet Underground's songs. Lighter tracks like "Sunday Morning" helped explain the context of other bands on the mix like Belle and Sebastian or The Jesus & Mary Chain. I'll always associate this one with driving around with Charles.

Then there was the matter of Lou Reed's voice. Like my other voice crush Leonard Cohen, there was something about Reed's delivery that always made me feel like I was reading the baddest boy in school's diary. (Which was fun, since no actual bad boys seemed to go to my school.) The guy might have written songs about heroin, but don't think that means he wasn't a romantic.

How many times have I listened to "Perfect Day?" At least once for each time I've fallen in love. Perfect day, perfect song.

And after love comes heartbreak. I loved "Oh! Sweet Nuthin'" before, but it actually wasn't until I saw the movie Away We Go in my 20s that I came to think of this track as one of the saddest songs there is. In the scene, a woman dances on stage, on a pole, to this song — after we learn she recently miscarried. (I really wish I could find the clip.)

Next time you're heartbroken, I recommend listening to this one with the lights off.

Lou Reed, the world won't be as cool without you. I'd say we ain't got nuthin' at all now, but you'd roll your eyes at that one for sure. Plus, it's not even true: we still have your music.