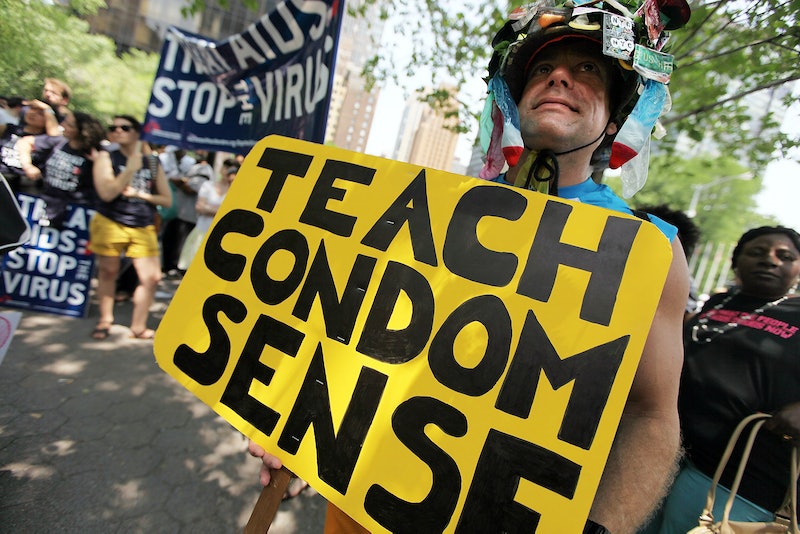 It can take a while for policy to catch up with reality, so it's a nice surprise when things take a step forward on their own. The American Academy of Pediatrics (AAP), the same doctors' group that advocated advance prescription for the morning after pill, is now saying that condoms should be more readily available for teenagers — and cheaply, to boot. In a policy statement published in the Pediatrics journal Monday, the group, which represents roughly 60,000 pediatricians across the United States, encourages schools in particular to make contraceptives easily accessible, so that teenagers don't necessarily need to ask for them.

The policy change is significant, and — in spite of an inclination to think duh — still quite controversial. Although teenage pregnancy has been on decline, the U.S. still has the highest rate of sexually transmitted infections of any other developed country, and almost half of our STDs are acquired by teenagers. A 2000 survey of adolescents aged 15-17 found that 38 percent of those surveyed were sexually active — over one-third of American teenagers, half of whom admitted to having sex without a condom.

According to the AAP, condoms are the best way to reduce the spread of STIs, but there's still a reluctance to making the contraceptive easily accessible.

"We have more evidence about how effective they [condoms] are against sexually transmitted infections," said Dr. Rebecca O'Brien, the policy statement's lead author. "That's especially true for viruses like herpes and HIV."

But, according to a researcher from the University of Pennsylvania: "Getting over the perception that giving condoms out will make kids have sex is a real barrier for parents and school administrators. I think one of the main issues is the idea that if you provide condoms and make them accessible, kids will be more likely to have sex. But really, that's not the case."

Research supports this. A study comparing public high schools in Chicago (where there is no condom availability program) and New York City (where condoms are readily available in schools) found that seniors had almost identical levels of sexual activity — but that in New York, students were more likely to use a condom. Another two-year study of Philadelphia schools showed that institutions which made use of condom availability saw the number of students having sex decreasing from 75 to 66 percent, and condom use rising from 37 to 50 percent.

"For teens to use them, they have to have them available, and they're not going to come in necessarily asking for them," O'Brien said. "Having them available, not just in healthcare settings is really important."

"Have them in the mall. They should be everywhere," she added.

The AAP also pointed out a strong connection between comprehensive sex ed and condom use, finding that teens that don't get any formal sex education are half as likely to use a condom when they first have sex, and less likely to use condoms thereafter. Which makes sense, especially considering that, according to a Planned Parenthood statistic from a couple of years ago, only 39 percent of high-schoolers are taught how to correctly use a condom during their health classes. The AAP is therefore recommending that programs which give more access to condoms should go hand-in-hand with a comprehensive sex ed curriculum.

More like this
Help! My Boyfriend Won't Tell Me Why He Stopped Going Down On Me
By Sophia Benoit
Megan Rapinoe's Relaxation Hack Is Super Dreamy
By Carolyn Steber
Romance Authors Are Mobilizing For Reproductive Rights
By Natalia Perez-Gonzalez
The Differences Between Kinks & Fetishes, Explained
By Lexi Inks
Get Even More From Bustle — Sign Up For The Newsletter