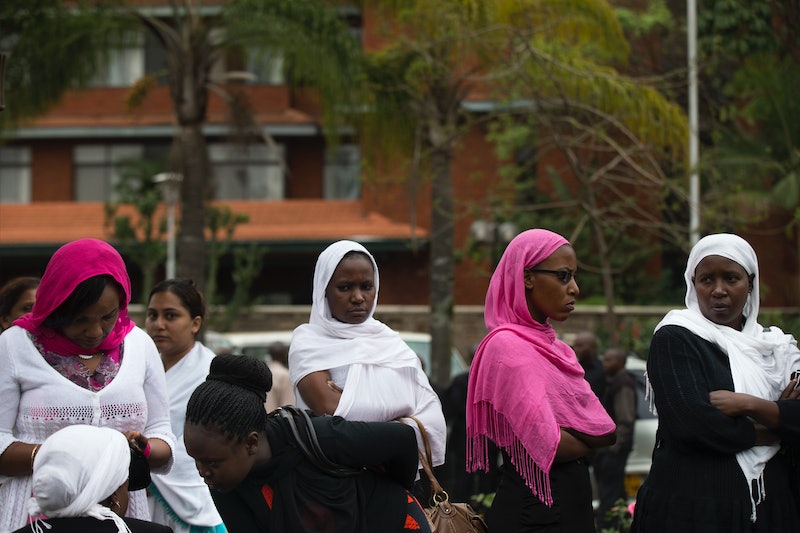 The girl, 16, was walking home from her grandfather's funeral in north-western Kenya, near the village of Tingolo, Busia. Six men appeared in the dark. She recognized them, especially one in particular: She'd turned down his attentions months earlier. She knew the men were coming toward her for the wrong reasons. She ran, but she couldn't run fast enough. When the men caught up with her, she began to throw punches. When she could no longer fight, each of the six men raped her. She kept screaming until the men threw her 12 feet down a nearby latrine.

Somehow, the girl managed to climb out. Villagers who had heard her screaming found her. She told them the men's names — the ones she knew — and villagers went after them. They found three of the six and took them to the police outpost. The officials promised punishment.

The next morning, the rapists were ordered by officers to cut the grass in the police compound. That was their only punishment. After an alleged rape and attempted murder, they were free.

Unfortunately, rape is not uncommon in Kenya. Nor is it simply common —it is prolific. A woman there is raped every 30 seconds — that's an estimated 120 an hour. Sixty-eight percent of girls are estimated to be victims of forceful sex. But it's a crisis that, until now, the international community has not been talking about — because when violence is this commonplace, it often becomes normalized. (It speaks volumes, for instance, that this girl's story took four months to reach the Guardian .)

Furthermore, much like the Maryville rape case here at home, members of insular local communities tend to protect the accused. In the case in Kenya, teachers asked police who came looking for the three school-aged rapists if arrests could wait until after exams. The police agreed, and the teachers took the opportunity to hide them.

In Kenya, the Sexual Offenses Act (SOA) stipulates that the punishment for rape should be no fewer than 15 years in jail, and can go up to a life sentence. Surgery and counseling for the victim are paid for by the state. But somewhere in the process, a systemic breakdown appears to be occurring.

It may have something to do with the fact that the SOA in itself is highly problematic — female members of Parliament in Kenya even walked out during its debate. Marital rape, for example, isn't criminalized. (There's a blatant discrepancy in the country between the five percent of men who say it's acceptable and the (at least) 14 percent of Kenyan women who say they have experienced it.)

Perhaps worst of all, Section 38 criminalizes false allegations of sexual assault: If a woman's allegations are determined to be false, she is given the same punishment as the alleged rapist would have been given for actually raping her. Such a clause hinders women from reporting assault — especially in a system that automatically disadvantages them.

"In a system where access to justice is based on dichotomies of whether one is rich or poor, man or woman, health[y] or sick; with the first variable almost always getting the upper hand, women are bound to suffer," writes Anne Kithaka in a commentary for Pan-African Voices for Freedom and Justice.

Additionally, at any given time during police proceedings, the presiding Attorney General can call off a rape investigation. In a country where the police force is known to operate around a system of bribes, this coercion might not be so unusual — if the case makes it to the attention of the attorney general at all.

The next problem is with the enforcement of the law. Often, police are alerted but do nothing. In this case, police knew the names of the 16-year-old's assailants the day after the rape took place. Yet instead of 15 years in jail, the three of the six rapists who were caught were simply told to cut the grass.

"This is yet another example of blatant impunity and repeated noncompliance by the police and other government authorities," Kenya's Coalition on Violence Against Women said in a statement. "Rape and other gender crimes have consistently been treated as lesser crimes — this is unacceptable."

Furthermore, much like the Maryville rape case here at home, members of insular local communities tend to protect the accused. In the case in Kenya, teachers asked police who came looking for the three school-aged rapists if arrests could wait until after exams. The police agreed, and the teachers took the opportunity to hide them.

After the Kenyan Daily Nation and a subsequent Twitter campaign brought this case to light, Kenyan police chief David Kimaiyo tweeted that the alleged rapists were awaiting an arraignment. The tweet has since been removed, and no one knows how many men were arrested.

A culture of "entrenched chauvinism," where girls and woman are not valued by the community, is essentially what enables the crimes, according to social worker Mary Mahoka. Eight years before the Sexual Offenses Act was passed, acceptable compensation for rape — paid by the rapist to the victim's family — was a bag of corn or a goat.

"The Busia rape case is symptomatic of our society's attitudes towards women," said Kenyan commentator Rasna Warah. "Violence against women has become so normalized it almost constitutes a sort of 'femicide'."

The 16-year-old was so violently assaulted that she can't walk or control her bowels. Instead of the state covering her expenses, her mother had to sell their chickens — their sole source of income — and mortgage the family home just to transport the girl to the next big town for treatment that involved more than antibiotics and aspirin. Eventually, it was found she had fistula and damage to her spinal cord.

"Letting rapists walk free after making them cut grass has to be the world's worst punishment for rape," Nairobi-based women's rights activist Nebila Abdulmelik said, who created a petition calling for the girl's justice that has since gathered 190,000 signatures. "There is a silent epidemic in Kenya."

Until that epidemic is addressed, Kenyan women will continue to be "failed" by a government that does not listen to its female members. They'll be failed by law enforcement that does not live up to its obligation to enforce the rule of law. And — hardest of all to change — they'll be failed by entrenched cultural values that normalize rape as a part of daily life. And for 2,880 Kenyan women each day, it is.