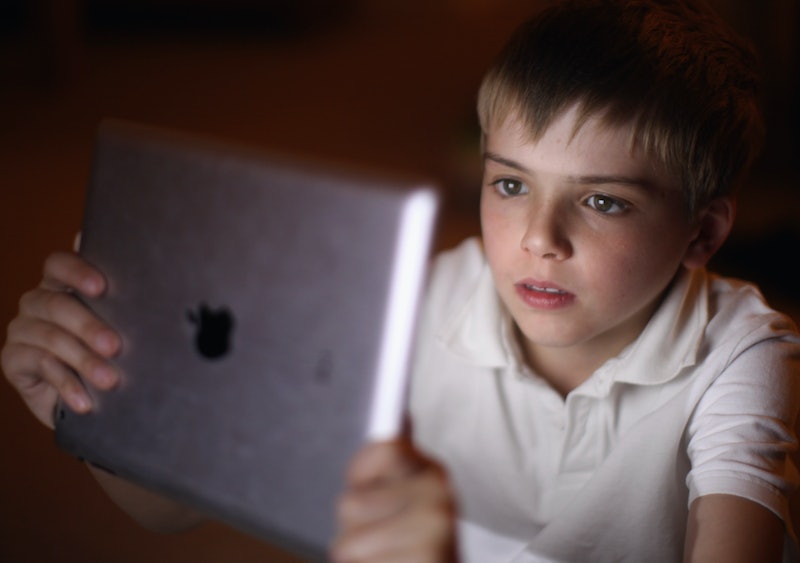 Seriously, do kids ever play outside anymore? A new report from the American Academy of Pediatrics (AAP) asks parents to come up with a 'media plan' to manage their kids' electronic diet. A "media plan" would divvy up the amount of time per week each child spends on TV, cell phones, and/or tablets, and parents would work to ensure their kid stuck to the diet. The "diet" is necessary, because America's kids are binging on screen time: According to the AAP, the average 8-10 year old spends eight hours a day on some sort of screen media. For older children, the number swings to 11 hours.

In the last two years, according to CSM's national report, the number of kids that use mobile devices for entertainment has almost doubled — up to 72 percent from 38. One in five does so on a daily basis. Large portions of screen time have been linked with obesity, sleep deprivation, and aggressive behaviors, which the AAP say they're deeply concerned about. Their proposal recommends limiting children's exposure to bright, shiny, colorful screens to fewer than two hours a day. It also asks parents to take into account the "quality" of media: cough, Grand Theft Auto, cough.

"Media can be good or bad," says Strasburger. "There's some extraordinarily good media out there. It's a matter of finding the right stuff for the right aged child or teen and limiting access to inappropriate media."

Seriously. What happened to this?

Parents are also encouraged to keep media out out of kids' bedrooms, where kids can stay up all night to binge on Angry Birds. As for kids fewer than 2 years old, the AAP recommends that screen media is to be avoided altogether. (That gasp of horror you hear is from parents everywhere.) Because they define "screen media" as TVs, computers and tablets, that means no more Baby Mozart for aspiring Garageband toddlers. Not like it works anyway — and the AAP has actually been making this recommendation for at least three years.

Ugh, parents actually have to parent their kids now. Or you know, give them a book or some colored pencils or something.