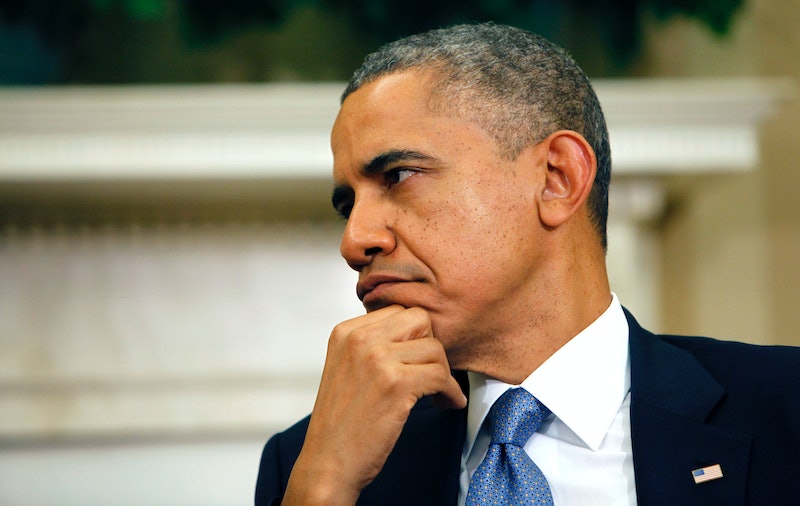 As if October hadn't been a rough enough month for President Barack Obama, his Facebook and Twitter public accounts were hacked into Monday afternoon. The Syrian Electronic Army, notorious for their high-profile cyber-attacks, claimed responsibility for the hack: "Obama doesn’t have any ethical issues with spying on the world, so we took it upon ourselves to return the favor," tweeted the SEA. During the hack, which occurred at about 1 p.m. ET, the President's accounts continued to share links about immigration, employment, and climate change — but all links sent the user to a graphic, 24-minute YouTube video claiming to contain "the truth about Syria."

Twitter immediately retaliated, bleating that it had not been hacked into, and that the attached links were faulty. Sure enough, it appears that the SEA tampered with the link-shortener service on BarackObama.com, where the links were intended to redirect, and changed the destination to the YouTube video. By 2 p.m., White House officials got word of the hack and wasted no time in fixing the faulty links. Somewhere in D.C., we imagine Obama is texting Michelle: "OMG, RLY?!"

Images of the botched links have swiftly spread over social media, which Obama is probably particularly displeased about, because this ain't a good photo, to boot.

The SEA hasn't exactly been modest about the hack, posting screenshots of how they accomplished the feat on their Twitter account. It appears that they were able hacked the emails of multiple campaign staffers — Quartz confirmed that at least one staffer said that her account was compromised over the weekend — but didn't find much. For example, here they are pointing out that the Obama administration was a little late paying its bill to ShortSwitch, which manages the link-shortening they were able to hack into. (We imagine ShortSwitch will lose some customers after this...)

We guess they just thought it'd be fun to throw a "Hey, guys, you're at high risk of terrorism, BTW!" out there.

The White House and Barack Obama Twitter accounts have maintained a dignified silence, instead Tweeting updates from the installation of new FBI director James Comey.

The White House hasn't had a lot of success as of late on Twitter. Last week, the administration's national-security staffer Jofi Joseph was fired after being identified as the guy who had spent three years making bad-taste jokes and publicizing internal information via Twitter account @NatSecWonk. Tweets like: "Growing problem for the Administration – too many 1st term holdovers not getting the hint that it’s time to move on and get the fuck out" and "Does anyone really care what @sulliview thinks? The NY Times Public Editor is a joke. Never seen more navel self-gazing in my life" prompted a month-long investigation into the White House mole.

What a shocker: turns out the government using social media for PR could be backfiring.