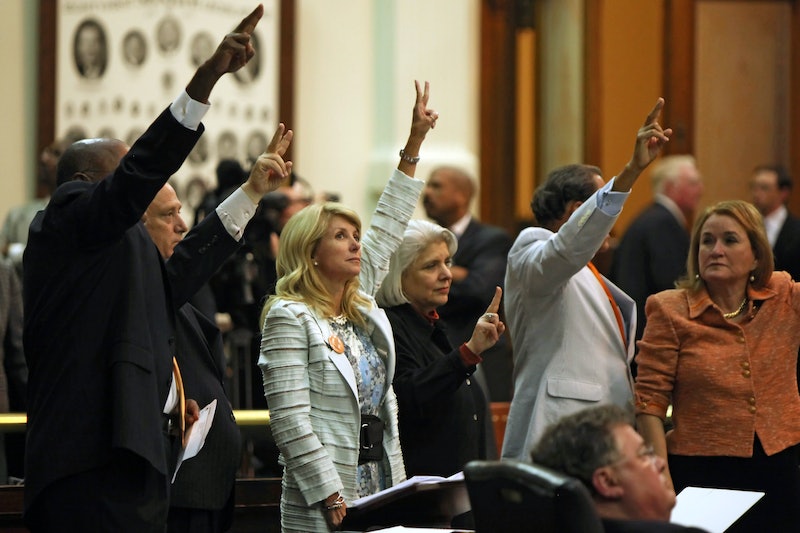 It's a good day for Wendy Davis, and well, all women in Texas. Some of Texas' new abortion limits are unconstitutional, according to a ruling by a federal judge. The restrictions were supposed to be implemented statewide on Tuesday. But now, District Judge Lee Yeakel has ruled that the abortion regulations hinder doctors' choices for their patients and restrict access to abortion clinics. A lawsuit by Planned Parenthood, the Center for Reproductive Rights, and the American Civil Liberties Union claims that the new regulations would close down a third of the clinics in Texas. The ruling did not block the proposed 20-week abortion ban.

The frenzy over Texas' abortion restrictions reached its peak in June when state Sen. Wendy Davis, who is now running for governor, filibustered in the state Legislature for 13 hours to attempt to block them. Heated protests occurred at the state Capitol, pitting orange-clad abortion-rights activists against anti-abortion groups.

In a 26-page order, Yeakel specifically targeted the proposed statute that required abortion providers to have hospital admitting privileges. "[It] does not bear a rational relationship to the legitimate right of the State in preserving and promoting fetal life or a woman's health and, in any event, places a substantial obstacle in the path of a woman seeking an abortion of a nonviable fetus and is thus an undue burden to her," he ruled after three days of testimonies in Austin.

He also nixed a limit on pregnancy-terminating drugs, calling the restrictions "clearly more burdensome to a woman" than current procedures.

According to the Houston Chronicle:

Yeakel said the statute did 'not fail constitutional review because of the lack of a specific health-of-the-mother exception' but 'may not be enforced against any physician who determines, in appropriate medical judgment, to perform a medication-abortion using the off-label protocol for the preservation of the life or health of the mother.'

Basically, the law was ruled unconstitutional because of its enforcements against doctors, not mothers.

And as the Associated Press reports:

During the trial, officials for one chain of abortion clinics testified that they’ve tried to obtain admitting privileges for their doctors at 32 hospitals, but so far only 15 accepted applications and none have announced a decision. Many hospitals with religious affiliations will not allow abortion doctors to work there, while others fear protests if they provide privileges. Many have requirements that doctors live within a certain radius of the facility, or perform a minimum number of surgeries a year that must be performed in a hospital.

An emergency appeal of the ruling is expected by Attorney General Greg Abbott, according to the Associated Press. Abbott, a Republican, is also running for governor.