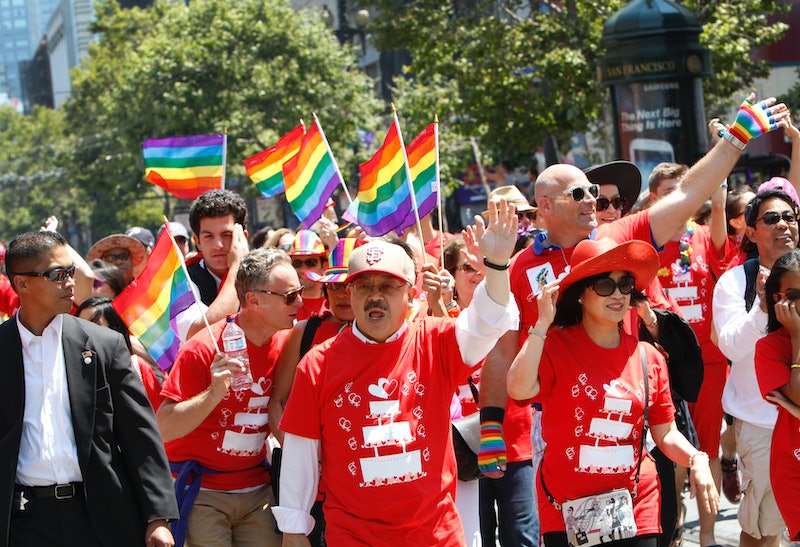 The Employee Non-Discrimination Act (ENDA), which would ban workplace discrimination based on gender and sexual orientation, will receive a full Senate vote before Thanksgiving, Majority Leader Harry Reid announced today. The bill was introduced back in April by Oregon Senator Jeff Merkley and has 54 co-sponsors, 52 of whom are Democrats.

The bill is hoping for wider bipartisan support: A diverse coalition of interest groups have been lobbying for the bill, including not only the usual liberal suspects but also the American Unity Fund, a conservative group. The AUF has signed on former Republican legislators Tom Reynolds and Norm Coleman, both of whom say they oppose gay marriage but support non-discrimination protections for LGBT people in the workplace, to lobby their ex-colleagues to support the bill.

The bill hinges on GOP support, and it may be a good political move (not to mention, you know, basic common sense) for the GOP to not oppose it. After losing the presidential election and blowing a ripe opportunity to take control of the Senate last year, many in the Republican establishment spoke of the need to become a more inclusive party. In general, they haven’t actually done anything to make this happen, as that would require making policy sacrifices, which Republicans and their base broadly oppose. In fact, one could even argue that since the election, Republicans have become less inclusive and more alienating. However, the AUF is one of the few conservative groups working to change this, at least on gay rights, and is trying to convince GOP lawmakers to support ENDA.

“The Republican image, unfortunately, is one in which we have an empathy gap,” said Coleman. “That impacts us across the board. An issue like this, which is about being against discrimination, feeds into the long-term future of the party. It addresses one of the negatives that we are facing today.”

In addition to AUF’s effort, the Human Rights Campaign has 30 field organizers in Ohio, Pennsylvania, Arizona, Nevada and New Hampshire working on behalf of the law. Their targets probably include the constituencies of legislators like Ohio Senator Rob Portman, a Republican who began supporting gay marriage once his son came out, and Nevada Senator Dean Heller, also considered a gettable vote on the legislation. Freedom to Work, an LGBT group focused on strengthening workplace protections, has also put considerable muscle behind ENDA, using bilingual call centers to reach out to voters in Arizona and Nevada.

Even if the bill passes the Senate, it will have a hard time getting through the House of Representatives. Just putting it up for a vote would potentially require Speaker John Boehner to run afoul of the conservatives in his caucus, the perpetual satisfaction of whom is the primary goal of Boehner's speakership.

But you never know; maybe the AUF's lobbying efforts will pay off, and the GOP will recognize — even if only for political reasons — that allowing businesses to fire people due to their sexual orientation or gender is, um, terribly wrong.

More like this
An Honest Review of MeUndies Boxers, According To A Non-Binary Person
By Megan Lasher
The 19 Best Tweets & Memes About Bisexual Awareness Week
By Lexi Inks
Pro Footballer Zander Murray Is "Blown Away" By Support After Coming Out
By Sam Ramsden
'Heartstopper' S2 Just Welcomed Four Brand New Cast Members
By Nola Ojomu and Sam Ramsden
Get Even More From Bustle — Sign Up For The Newsletter