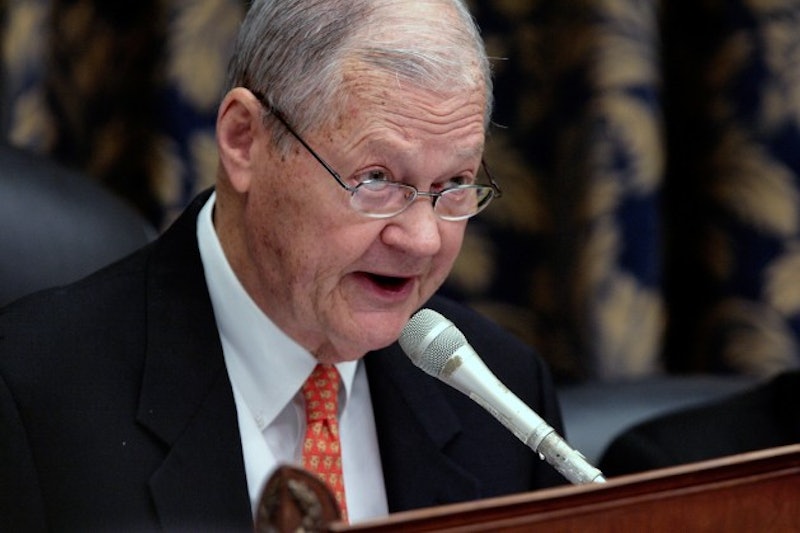 Former Representative Ike Skelton, a conservative Democrat from Missouri who lost his seat in the 2010 Republican wave, died on Monday. Skelton had entered the Virginia Hospital Center a week ago with a bad cough, longtime colleague Russell Orban told AP, but his cause of death wasn’t immediately released. He was 81.

During his 34 years in Congress, Skelton focused on military issues, working hard to bolster the U.S. military’s presence and spending in Missouri and becoming chair of the House Armed Serviced Committee in 2007. In 1983, Skelton quadrupled the number of troops at the Fort Leonard Wood military base in his state; ten years later, he got the Defense Department to station the B-2 Spirit stealth bomber at Whiteman Air Force Base, another Missouri base.

Skelton also opposed abortion, gun control, and ending Don’t Ask Don’t Tell, which he helped craft in the 90s. As such, he was one of many conservative Democrats to lose his seat in the 2010 midterms, in which Republicans gained control of the House and the Democratic caucus became smaller but more liberal.

Skelton is the third member of Congress to die in the last two weeks, after the passing of Tom Foley, a former Democratic House Speaker, and Bill Young, who was the longest-serving House Republican. He will be survived by his wife and sons, who were gathered at his bedside when he passed.