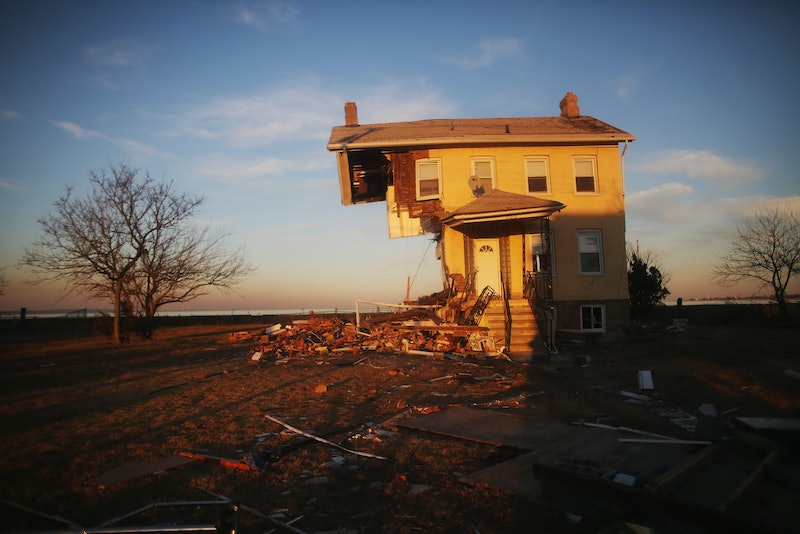 In New Jersey, everyone has a Sandy story. It might be that your just-married friends were forced to accept a buyout for their house from the government. Or that your uncles’ business flooded up to the top of their desks, but miraculously didn’t go one inch further. Or that even when the waves surrounded your neighbor’s house like a fishtank, they stayed with their dogs. As I hear about more and more stories of devastation and recovery affecting the people of the Garden State — my people — I can’t help but repeat one quote over and over in my head. It’s by Pulitzer Prize-winning author Junot Diaz, who lived in my town. The quote is from a mural in Asbury Park, but it can be applied to the entire Jersey Shore. “The boardwalk was where all of New Jersey came together, where New Jersey, for better or worse, met itself.”

And those words were never truer than in the aftermath of Superstorm Sandy.

About two weeks after Sandy hit on Oct. 29, 2012, I decided to take a 20-minute car ride to Union Beach, N.J., to donate some coats. My electricity and heat had finally returned after nine days, and it had recently taken me 4 hours to commute to New York on the bus. What I saw in Union Beach made my problems completely trivial. The scene will be ingrained in my mind forever.

As I drove down Union Avenue, I thought to myself, “Well this doesn’t look too bad.” I even saw some little kids riding bikes along the road. But as I crept closer to the shoreline, the air around my car started to get clouded with dust, dirt, and sand. Debris lined the street, and emergency personnel and volunteers crowded the sidewalks. I never made it to the shore. I was too terrified. I gotta get out of here. I shouldn’t be here! I thought. It felt like I was invading an unknown land, even though it was only a few miles away from my home.

I turned down a side street to make my escape. What I saw there looked like a bomb had exploded. Debris of every kind — soaked and filthy chairs, sofas, clothes, appliances, garbage — lined the street. Glass and wood littered the roadway. Hollowed-out shells of houses teetered precariously on their sides. Roofs were blown off and boats had been tossed all over the place. Glassy-eyed families were filling dumpsters with their livelihoods.

As I was leaving Union Beach, I passed a sign that read, “Tough Times Don’t Last. Tough People Do!”

As I made it back to the nearest highway, I'll admit, I breathed a huge sigh of relief. I later regretted not getting out of the car to donate those coats, pick up a shovel, help gather debris — do anything other than just write a check. It was too overwhelming at the time. Even though I'd seen the images on TV and had just experienced the storm myself, I was not prepared for what I encountered.

One year later, I finally made it back to Union Beach — and this time, I got out of the car.

I met with one of Union Beach's "tough people," Gigi Liaguno-Dorr, owner of Jakeabob’s Bay restaurant. She has since relocated temporarily to a location away from the Raritan Bay. Her new restaurant is composed of about 50 restored doors from many homes that were destroyed or needed to be demolished after the storm. They line the entrance to the restaurant and also serve as tables. Liaguno-Dorr says people like to come in and sit at the table of their old home’s door.

“I believe we captured the hope of the town,” she says.

Liaguno-Dorr says Jakeabob’s will remain in its new location until at least March. She still pays the mortgage, taxes, and insurance of her old location, even though there is no building there at all.

She says she wants to return to the bayside location “as soon as the insurance companies decide they want to pay.”

Holmdel, N.J.’s Gateway Church of Christ Pastor Carl Williamson teamed up with Liaguno-Dorr, and they’ve become an unstoppable force for the community. Using his connections at the Churches of Christ Disaster Relief Effort organization, Williamson got two tractor-trailers with $90,000 worth of basic supplies each into the town within four days of the storm. “The Pastor and the Bar Owner,” as he dubs himself and Liaguno-Dorr, were able to ultimately bring in more than 800 mattresses, 300 appliances, and seven tractor-trailers of furniture for the town.

Williamson says his focus was to “get as many people back into town as we possibly can.” His organization has since gotten grants to clean up the entire Bayshore area and has teamed up with churches of all denominations to bring 17,000 volunteers to Union Beach over the summer — and 95 percent were from out of state. The volunteers paid for all of their expenses out-of-pocket, and still gave donations after their shift, Williamson says.

Today alone, more than 200 people are volunteering in Union Beach, but the town still needs skilled plumbers and construction workers, as well as others to help clean up the lingering debris. Williamson says interested volunteers can go to GatewayNJ.com.

Even though much progress has been made, as I look around the now-desolate Jersey Shore town with a spectacular view of the Manhattan skyline gleaming in the distance, I wonder if it can ever fully recover — or if it could even sustain a smaller Sandy.

This whole year, as I've seen some of my favorite places — the centers of my childhood summers — ripped to shreds, I feel like my heart has broken over and over. Visiting Union Beach one year after Sandy, I felt the same unease and anxiety. This time, however, I was struck by one marked difference: the complete silence that enveloped the town.

It's almost like it's holding its breath, waiting for better days to come back.

More like this
You Can Stay At The 'Hocus Pocus' House On Airbnb
By Alexis Morillo
Craving The Beach? Here's Your Guide To A Solo Vacation In Turks & Caicos
By Alexis Morillo
Chris Kaba's Family Continue Fight For Justice After Viewing Police Bodycam Footage
By Sophie McEvoy
5 Ways To Help People Impacted By Hurricane Ian In Cuba & Florida
By Emma Carey
Get Even More From Bustle — Sign Up For The Newsletter