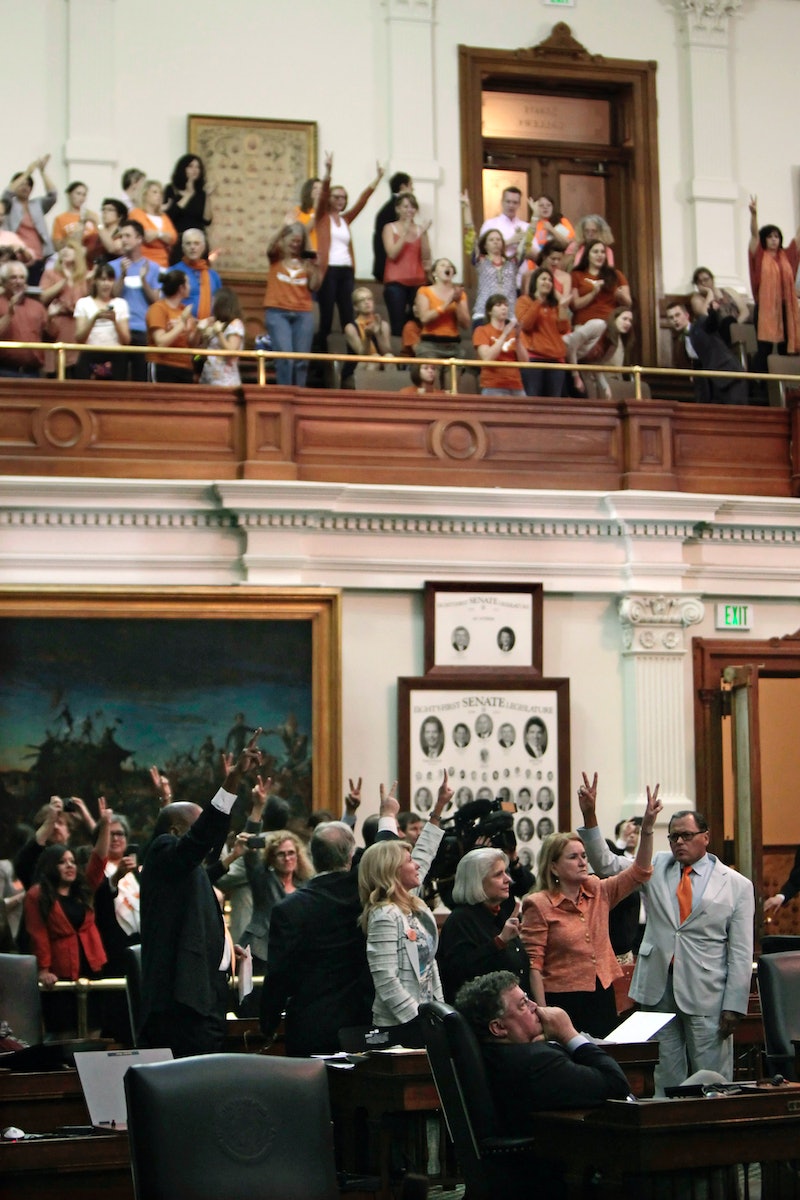 Texas' hugely controversial abortion bill that, if passed, would have been the strictest in the nation, was struck down in part yesterday by George Bush-appointed judge Lee Yeakel, who ruled it partly unconstitutional. For Yeakel, the bill presented "a substantial obstacle in the path of a woman seeking an abortion of a nonviable fetus and is thus an undue burden to her."

It turns out to be an "uneven" victory for women: While one-third of the state's abortion clinics no longer have to close, the judge let stand a clause that drastically limits the use of medication abortion. The ban on abortions past 20 weeks also remains unchallenged and unaddressed by Yeakel, which means key issues that permeate and fuel the debate everywhere — not just in Texas — are still on the table.

Today, the Twittersphere is flooded with reactions, and there's some talk about where the bill might go next. Because if there's one thing for sure, it's that the state's anti-abortion/pro-life advocates aren't going to go down without a fight — this is Texas, ya'll.

Led by Texas Attorney General Greg Abbott and Governor Rick Perry, the state plans to appeal Yeakel's ruling in an emergency filing that could very well wind up at the federal Supreme Court. “We will continue fighting to implement the laws passed by the duly-elected officials of our state, laws that reflect the will and values of Texans," said Perry in a statement.

Abbott's expected to file his appeal at the 5th Circuit Court of Appeals in New Orleans. "I have no doubt that this case is going all the way to the United States Supreme Court," he said, saying he was pleased with the speed of the decision, because it meant it could wind up — as he expected — in an appeals court more quickly.

Of course, there is a hugely mixed bag of reactions across the Twittersphere.

Name calling aside, if abortion really is, as Yeakel said, the most divisive issue since slavery, it's going to be awhile before this simmers down — and the result of the case will be precedent-setting.

Another significant abortion ruling happened a few days ago: The EU voted 351-319 last Friday that access to abortion is not a human right — a philosophical stance that, if passed, would require all member states to have provided services "as a human rights concern", making it "legal, safe, and accessible to all."