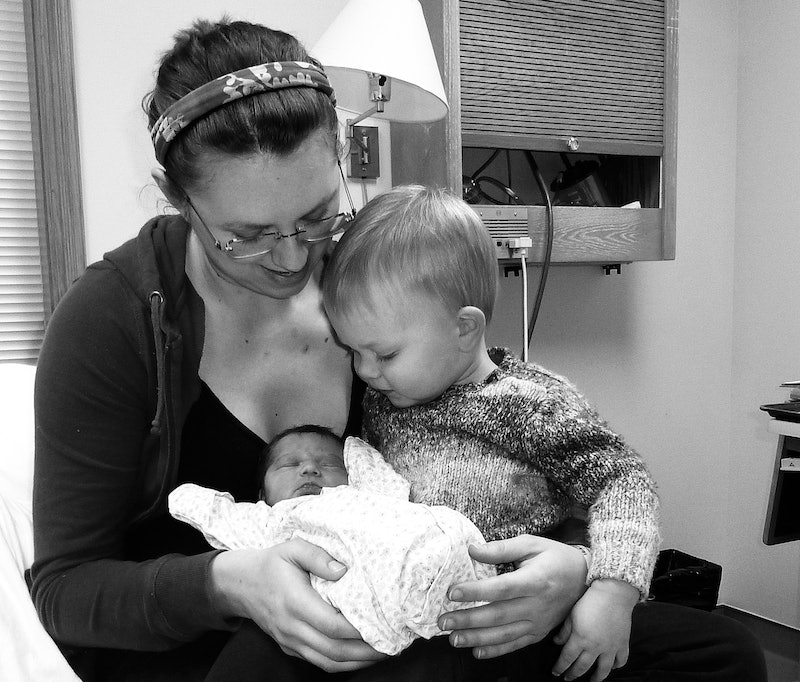 About three years ago, I had my first child, and discovered that becoming a mother isn't quite as straightforward as just popping out a baby. I mean, in the biological context, I suppose it’s pretty simple: you have a baby, you are a mom. But for me, the cultural process of becoming a mother was a very messy transition (and I'm not talking about all the bodily fluids). I thought becoming a mother meant I had to change who I was.

During my first pregnancy, I summoned up all the ideas of motherhood I had been exposed to during the course of my life — including memories of my own mother, as well as the moms of pop culture — while I tried to figure out who I was going to become once my child was born. Our society attaches all sorts of values, philosophies and ideologies to the concept of motherhood, so part of becoming a mom is finding a way to reconcile the expectations of that role with the person you actually are.

When I sifted through all the images of motherhood I had ever been exposed to, I came up with an image of a mom as a woman who puts herself last, who gives up things she is passionate about in favor of focusing on her family, who leaves the workforce, who possesses unlimited patience, who is unconditionally kind and soft, and who is so busy all you see of her is the trail of dust she leaves in her wake. I wasn't naturally inclined to embody many of these traits and so I struggled to absorb that new (to me) cultural identity of a mother. Really struggled. I forced my personality to change as I tried to become all the things I thought a mother should be.

Already, I was being told there was a right way and a wrong way to do this whole mother thing — and I hadn't even given birth yet.

Sure, I had always thought I was going to be a mom some day. But I wasn't ready when I found out that that day was actually here. I believe that even for women who spend years trying hard to conceive, motherhood is still an abstract concept until it happens. You can spend years dreaming about how family life will be — but it's all hypothetical until you're holding a positive pregnancy test in your hands.

Not so long ago, I was an average 20-something who spent her time trying to launch a writing career and thinking about babies exactly never. I was a recent grad working at a local newspaper and I spent my evenings behind a bar getting leered at by sleazy regulars. I was taking life easy, drinking too much, hanging at the beach and staying up until the wee hours of the morning. I had no idea motherhood was on my short-term horizon and when I came face-to-face with that fact, it was enormously startling.

I had a lot of reactions to my pregnancy that were totally out of step with my personality — like avoiding my friends, planning to quit my job, and trading in my pen for a rattle. I'm pretty certain it wasn't entirely the hormones —rather, it spoke to the pressure new parents are under to fit into a prescribed social mold.

While I was struggling to figure out if I had enough patience and nurturing instincts to be a good mom, I also suddenly found myself in the strange spotlight that impending motherhood brings. The general public's interest in my bulging midsection was disconcerting.

My family and friends, as well as complete strangers, seemed to now have an opinion on how I would parent. I was asked questions like: did I know I wasn't supposed to be eating sushi, should I really be exercising, was I planning to breastfeed, bank the cord blood, get an epidural. Not only did everyone expect an answer, they seemed to expect a specific answer. Already, I was being told there was a right way and a wrong way to do this whole mother thing — and I hadn't even given birth yet.

My hair was one of the first victims of my struggle to transform into a mom. I had been rocking a pixie cut for about a year — something I'd been working up the courage to do for a long time — and I loved it. But sitting at my desk, not long after the truth had sunk in, I was suddenly struck by the notion that I absolutely had to grow my hair out.

There was no way I could become a mom with short “mom hair,” which in retrospect makes no sense. Neither I nor my hair were going to automatically morph into a cultural stereotype just because I gave birth to another human being. Despite this fact, I subsequently spent months enduring awkward growing-out hair as my tresses inched slowly downward, while I spiraled into deeper internal confusion.

I soon realized I was an anomaly: I had no friends with children. At 25, I was by no means the youngest person ever to have a baby; but I was alone in my peer group. These days, many young adults are shifting their priorities, postponing marriage and having children in their early 30s or later, or eschewing it altogether, so my social circle wasn't unusual. My friends were busy partying and here I was, pretending to sip a beer, while concealing our exciting news.

I felt disconnected from my friends and jealous; they were untethered, globe-trotting, suffering for their art or going back to school. Their life decisions didn't impact anyone but themselves. I was excited for the baby but I was also swimming in a sea of nostalgia and regret.

I wish I had realized sooner that the only person I had to be in order to be a good parent was me.

Out of fear of their theoretical dismay over my news, I held off from announcing the pregnancy. I thought my social group would look at me differently — they wouldn't see their old friend anymore, but rather a strange, exotic creature with whom they had little direct experience: a young mom. I thought she would be less interesting to them. My fear and discomfort about the change that was happening in my life made it difficult to share the experience with others. I didn't tell my best friend; I resisted telling anyone if I could avoid it. I felt like I was carrying around a secret, not a baby.

When I finally broke the news to the world (via Facebook of course) I felt weightless. Can you image not telling your best friend that you are pregnant? Of course, everyone was thrilled for me and no one thought I was different. But my reluctance to tell them symbolized how deeply I believed that I had to change completely to become a mom.

Another example of this was leaving my job. My newspaper job was low-paying, with long, demanding hours, and I loved it — but I felt like I was expected to re-prioritize my time to favor family life. I worried if I gave up my job, I would never find another and I loved working as a writer — but nevertheless, I took a break of undetermined length. I abandoned my artistic side and felt disconnected from the greater socio-economic world.

In the past three years since the birth of my son, I've learned more about myself than I expected, including that I don't have to fit into some predetermined mom mold. I now give my passions like art and work a priority. Writing was one of the first things that helped me find solace in my new unpredictable life. About a year after our son's birth I decided to recommit to being a writer, and a year and a half after that, I began writing seriously again.

The purpose I found in that helped me finally bridge the gap between childless-Jenn and mother-Jenn. And when our second child was born, I knew that despite the fact that a new baby meant an increased workload at home, giving attention to my personal passions was equally important.

I wish I had realized sooner that the only person I had to be in order to be a good parent was me. If I had understood the simple truth that I was just growing as a person, not changing completely, it would have saved me a lot of anxiety and a very uncomfortable hair transition. But only time and experience gave me the perspective I needed to see that.

And as an early Mother's Day present this year, I cut my hair.