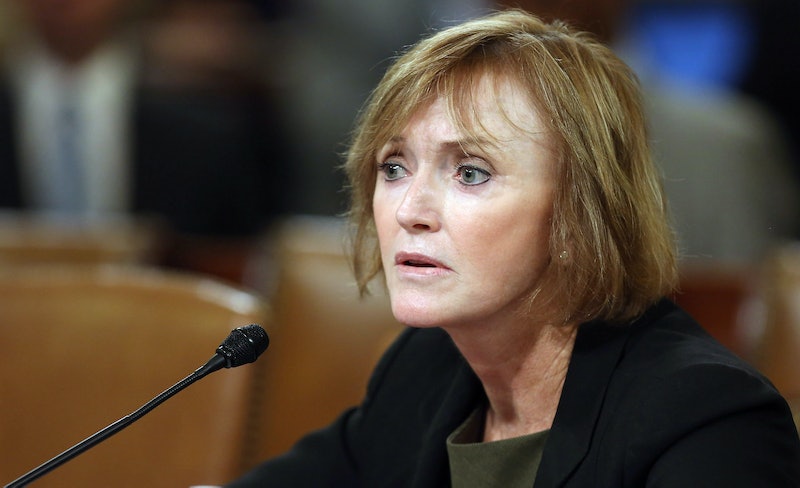 Well, it had to happen sometime: Marilyn Tavenner, a federal health official, has apologized for the shitstorm that is Healthcare.gov during today's round of website-related Congressional hearings. And in other Obamacare headlines, it's good news for millennials: Young adults might be able to get coverage for as little as $50/month, according to a new Health and Human Services (HHS) report.

Meanwhile, in the "blame game" hearings, some Republicans continue to contend that the broken website is symptomatic of a broken system. "The flaw is not in the website," Rep. Kevin Brady (R-Tex). "The flaw is in the law itself." He added that he doubts the government can "manage something as complex as healthcare," because I guess running a whole country and a tangly web of diplomatic relations is pretty simple, comparatively.

“I want to apologize to you that the website has not worked as well as it should,” Tavenner said, promising that the site was being worked on. She also assured still-irate Congressmen that the website's capacity had been expanded and that glitches were being systematically tackled — steps echoing the administration's promise all will be up and really running by the end of November, which is still plenty of time for people to get their coverage.

The Congressional hearings today also addressed reports that "hundreds of thousands" of people had had their private insurance policies cancelled, which some say negates President Obama's promise that those who like their coverage could retain it. However, that doesn't mean the coverage they have now is legal under the new law: The law tightens coverage to standards some private policies simply didn't meet. "Sometimes they thought they had coverage when they did not," Tavenner said. "Now some of them [the new policies] are moving to the new standards." Stuff's gotta be legal, guys.

But it looks like Millennials might not have to pay as much as originally thought for these tight new standards — perhaps as little as $50/month. An HHS report released yesterday indicates that, in at least 34 states with Affordable Care Act marketplaces, almost half of single Millennials could get coverage for less than $50 each month, and two-thirds for less than $100 each month. And if all the states expanded Medicaid coverage, nearly nine in 10 uninsured single young adults would get covered for less than $100 each month. As PolicyMic said:

If true, this marks a distinct break from the reports of premium spikes and sticker shock that many have been experiencing with the roll-out of Obamacare.

... Young adults are the age group most likely to be without health insurance, making the news that many of them are able to get insurance at affordable monthly premiums big news.

However, some of the less-expensive (i.e. less than $100/month) plans fall under the "catastrophic" category, in terms of the severity of medical care they'd require to justify up to $6,350 in deductibles that come attached. But if Millennials are willing to bet on their age group's robust health...