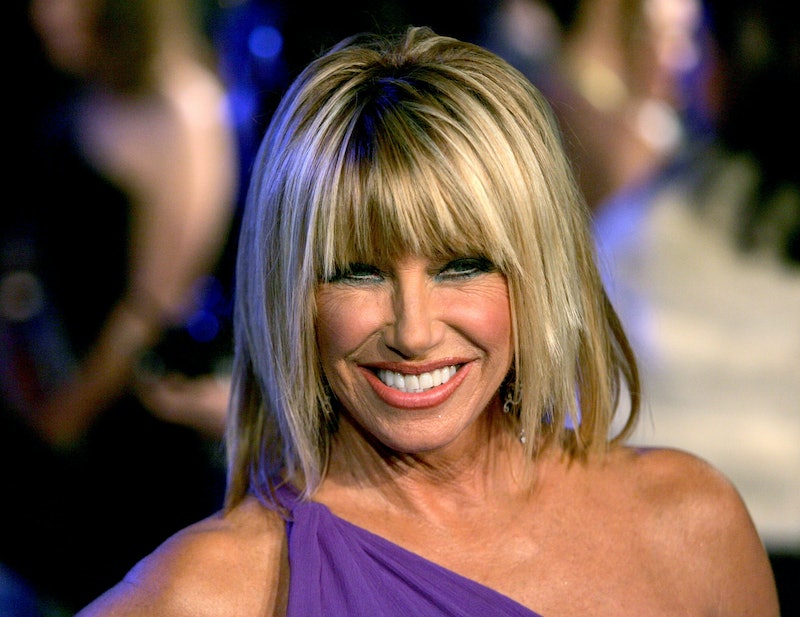 Well, this is awkward. Former Three's Company actress and Thighmaster spokesperson Suzanne Somers took to the Wall Street Journal Tuesday to share her thoughts on Obamacare. Spoiler alert: Somers thinks it's a Ponzi scheme. In recent years, Somers has been known for encouraging alternative cancer treatments over chemotherapy; authoring dozens of books on being skinny, remaining "sexy," and avoiding cancer; and supporting the Thighmaster exercise machine. The Wall Street Journal has, for reasons unknown, qualified her as one of their panel of "experts," but has already had to correct three errors in her Affordable Care Act editorial as of Tuesday afternoon.

I’ve had an opportunity to watch the Canadian version of affordable health care in action with all its limitations with my Canadian husband’s family... My sister-in-law had to wait two months to get a General Practitioner. During this period she spent her days in bed vomiting continuously, unable to get any food or drink down because she couldn’t get an appointment with the doctor. When she finally did, the doctor said, “Oh you don’t need me, you need a specialist.” That took another two weeks until she got a pill that corrected the problem.

Really, is this what we want?

The article is vague and unclear, but what Somers is essentially arguing is this: Obamacare is a socialist scheme that will raise people's premiums and prompt privacy issues. These aren't new points, but the evidence Somers uses to back them up is questionable: a five-year-old magazine story; confusing anecdotes about her Canadian relatives; and the fact that "it doesn’t take a rocket scientist to recognize that the whole thing is a big mess." It doesn't help that the article is riddled with factual errors — including retracted quotes by Winston Churchill and Vladimir Lenin — and that it offers no discernible solution. The Wall Street Journal corrected:

Also, the cover of a Maclean’s magazine issue in 2008 showed a picture of a dog on an examining table with the headline “Your Dog Can Get Better Health Care Than You.” An earlier version of this post incorrectly said the photo showed and headline referred to a horse.

Somers was most recently in the press for enthusiastically claiming that her active sex life — she and her husband of 36 years apparently have sex twice a day — is thanks to hormones. "He's on hormones," she said. "I'm on hormones." According to the Edmonton Journal, Somers takes about 60 supplements daily, plus a shot of human growth hormone.

Next up: WSJ asks Dennis Rodman to pen an editorial about Iran's uranium program.

More like this
Here’s Everything You Need To Know About Operation London Bridge
By Bustle UK
10 New Must-Read Books Out This Week
By K.W. Colyard
'MAFS UK' Changed The Rules After Matt & Whitney Cheated On Their Partners
By Catharina Cheung
What Is A "Hot Girl Book" & Why Is Everyone Talking About Them?
By Samantha Leach
Get Even More From Bustle — Sign Up For The Newsletter