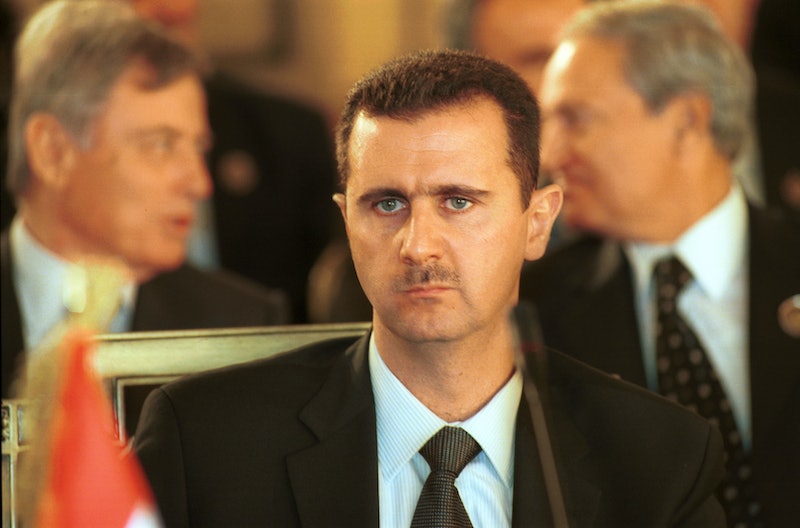 It's a bad week for Syria: United Nations chemical weapons inspectors missed a preliminary deadline in their quest to disarm the Syrian government's chemical weapons because they can't reach two cities, and the World Health Organization confirmed Tuesday Syria's first polio outbreak in over a decade. And there's more: according to some news reports, Syrian President Bashar al-Assad has fired Qadri Jamil, the deputy prime minister who handled most of Syria's international interactions from Moscow, and has granted amnesty for crimes that occurred before Oct. 29.

Remember those brief few moments when it looked like the crisis in Syria might be resolved soon? Yeah. Those were the days.

The thing about those few moments of hope is that they were rooted in statements made by Qadri Jamil — the same Qadri Jamil who was reportedly sacked over the weekend by Assad for meeting with U.S. officials without permission.

Jamil was the guy quoted in all the stories about the so-called Geneva 2 conference, tentatively planned for later this fall, that would outline plans for a peaceful transition of power in Syria. His plans were reportedly rejected by opposition groups, and he was, after all, the deputy prime minister. There didn't seem to be any reason to doubt his validity. But on Tuesday, Assad called him a member of the "patriotic opposition" — those in differing political parties who are working within the system to change Syria.

Shortly after the firing, Assad issued an amnesty decree for all criminal acts committed before Tuesday. Such a pardon was reportedly part of the demands some rebel groups made ahead of any peace talks. But the rebel groups are so disparate and differ so widely in ideology that it's unclear what effect the degree will have. It's unlikely that jihadi groups that don't recognize the legitimacy of Syria's government will be affected by pronouncement, but it might just be an attempt to bolster other opposition groups. Some believe that even Jamil himself might eventually emerge as a viable opposition leader:

But even if Jamil is being set up as a viable moderate successor to Assad, the week's other developments suggest the Syrian crisis will get much worse before it gets better.

Weapons inspectors missed the Oct. 27 deadline for visiting all 23 of Bashar al-Assad's declared chemical weapons sites. The team made it to all but two sites, which are believed to be in areas that are under heavy fire from rebel groups. The next deadline for inspectors in Nov. 1, for which their goal is to have eliminated Syria's ability to make new chemical weapons or deploy already existing ones.

And all that's without the public health crisis. According to the BBC, the WHO has confirmed 10 polio cases in Syria, with as many as 12 more still under investigation. The country's healthcare system has been in shambles since the civil war started more than two years ago. Before the war, 95 percent of Syrian youth were vaccinated against the debilitating disease; now, more than 500,000 are believed to be without the vaccination.

What goes down must come up?