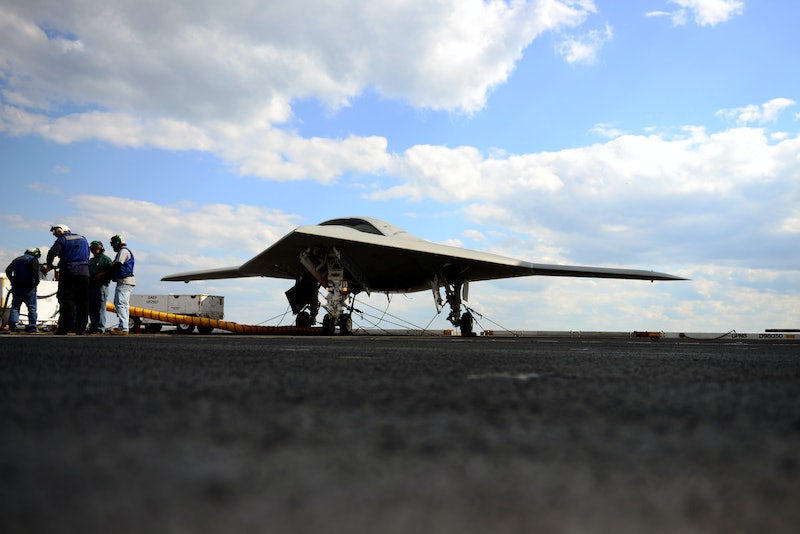 While some Congressional members point fingers over the Healthcare.gov debacle, another group of Congressional representatives are doing something undeniably significant: Amid reports that the U.S. drone program is killing significant numbers of civilians, a committee led by Ref. Alan Grayson (D-Fla.) gathered Tuesday for an independent briefing with drone strike survivors in order to hear their stories. It's the first time government representatives have heard from those affected by the drone program, which is now accused of human rights violations.

Some of the survivors come from North Waziristan in Pakistan, where an estimated 400 to 900 civilians have died in around 350 strikes since 2004. Nabeela Rehman and her older brother Zubair, for example, survived an alleged drone strike in the region, where American drones have become a part of daily life:

According to Zubair, who is twelve, the sounds of drones are nearly constant overhead, only vanishing completely on rainy days, to the point that he can tell the difference between them and other aircraft. This time though the unmanned craft sounded different, making more of a “dhuum dhuum” noise, Zubair said, opposed to the low thrum that the drone’s propeller normally casts over their village.

The children, along with seven others, were injured as missiles came down from the sky and shrapnel pierced their skin. Their grandmother, however, was not as lucky — and it's because of the impeccable precision of the missile that hit her that the Amnesty International researcher who compiled the report against the U.S. drone program, Mustafa Qadri, is so sure it was indeed a deliberate drone strike, and not just an alleged one:

Among the most striking evidence that the attack was carried out by a US drone, Qadri said, was the "phenomenal accuracy" of the strike. "It physically hits her," he said, referring to Momina Bibi. "She's literally hit flush and is blown to smithereens."

"It's quite awful obviously ... but in this sort of a situation where the body is destroyed, clearly she's been targeted," Qadri added. "They meant to kill this person."

On the way back from a consultation about Zubair's leg (which would need rods as a result of the strike) the children's father, Rafiq, heard about a lawyer, Shazar Akbar, who would bring their case to the U.S. State Department as part of a larger case he was building. Though Akbar got the Rehman family to America, his own visa was denied by the State Department — something that, he said, is only happening in the U.S., and something that only started following his work advocating for drone victims as director of the Foundation for Fundamental Rights. Without him, he's afraid that the survivors won't tell their stories.

"It's a great opportunity but they are scared," Akbar said. "There's a huge trust deficit. They don't trust the U.S.," he said.

However, despire their fear, the Rehmans made it.

"I could never have imagined that I would be coming to America or I'd want to come to America," Rafiq said. "I didn't know how people were. But then Robert had come and they were listening to our story and then Shahzad, our lawyer, had told us that there are more people like Robert who would love to hear the truth and know the truth."

The family also features in a Robert Greenwald documentary that aims to highlight the drone program and will be shown at the briefing. Called "Unmanned: America's Drone Wars," the documentary is decidedly anti-drone, but illustrates critical points Greenwald believes the government hasn't caught on to.

Using drones is “too easy, we’re killing too many people,” he [Greenwald] continued, “And as many people have said, we’re making ourselves less secure. In addition to the moral issue, think of the number of innocent people who have been killed, every one of them members of families. Everyone of them members of extended communities. And that’s a recipe for disaster.”

Grayson says he's looking forward to the opportunity to hear from the survivors, and Greenwald hopes the effort will lead to an investigation of the program.

“I’m looking forward to hearing from the drone strike victims,” Grayson said. “When it comes to national security matters like drone strikes, it’s important that we hear not only from the proponents of these attacks, but also from the victims. They have a unique perspective to share with Congress, and I hope that my colleagues will attend this important event.”